“What a stormful sunset was that of last night! How glorious the storm, and how splendid the setting of the sun! We do not remember ever having seen the like on our round globe. The scene opened in the West, with the whole horizon full of golden, interpenetrating luster, which colored the foliage, and brightened every object into its own rich dyes. The colors grew deeper and richer until the golden luster was transfused into a storm cloud full of the finest lightning, which leaped in dazzling zigzags all around and over the city.”
—by Samuel S. Cox (1824–1889) from The Statesman, a Columbus, Ohio newspaper he edited and published 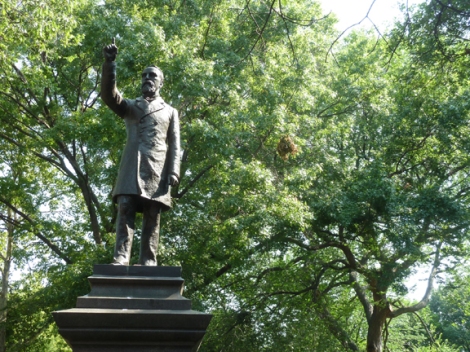 Seeming to stand amongst the trees Samuel Cox appears to hail a cab!

Mr. Cox was describing the sunset of the previous evening. His goal was to encourage the paper’s readers to appreciate life. There was much more to his description. It is impossible to know if he succeeded with his very lengthy lecture. What is known, however, is that after he wrote his flowery Victorian prose on the 19th of May 1853, Mr. Cox was forever branded with the nickname, Sunset.

Total height of the monument is 20 feet.

Mr. Cox was born in Zanesville, Ohio. Both sides of his family were involved in politics. His paternal grandfather was New Jersey Congressman James Cox; and he was named for his maternal grandfather, Samuel Sullivan, an Ohio State Treasurer. Mr. Cox served as a Democratic congressman from Ohio. President Grover Cleveland appointed him ambassador to the Ottoman Empire in 1885. The following year saw him back in Washington as a congressman from New York, with the support of New York City’s corrupt Tammany Hall. Mr. Cox was never part of Tammany’s thieving ways, however. 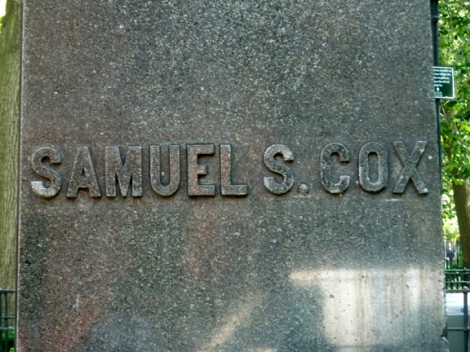 The middle initial, ‘S’, is for Sullivan, not his nickname Sunset. It is a fun coincidence though.

Were it not for his aggressive support on behalf of the United States Postal Workers, Congressman Cox undoubtedly would have faded into obscurity. The Congressman favored the postal workers bid for paid vacation. In 1884 he was able to persuade Congress to pass legislation giving all letter carriers a 15-day vacation, with pay, every year. Up to that time letter carriers were expected to work 365 days per year! This surprising victory illustrated to letter carriers the advantages of organization. Because Congress could no longer use the spoils system to appoint and discharge postmasters, national legislators were not disposed to helping postal workers. Therefore, Cox had put forth a monumental effort to get the legislation passed. 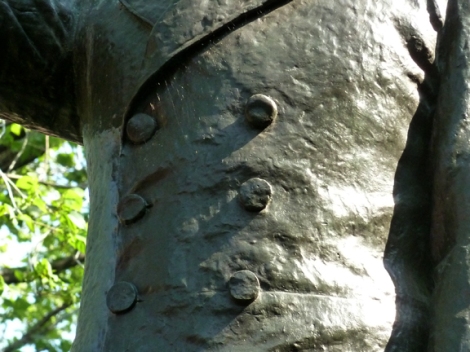 I like these prominent buttons on Mr. Cox’s coat.

Five years earlier it was Congressman Cox who convinced Congress to establish a regular pay scale for letter carriers. Up until then, each postmaster set postal workers’ pay; great inequalities ranged from city to city. The 1879 law created two grades of carriers in the larger post offices, with annual salaries of $800 and $1,000. In the smaller post offices Congress set carriers’ wages at $850 per year. 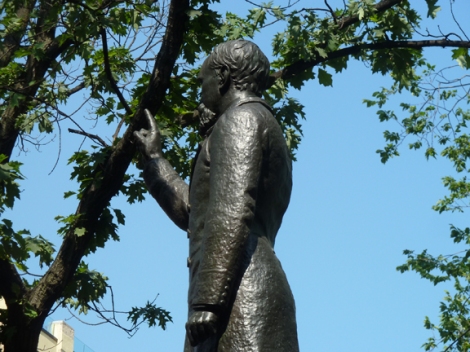 The bronze figure looks no less wooden in profile.

The postal workers called Mr. Cox “the letter carriers’ friend;” a campaign on the part of these grateful government laborers to erect a monument to their friend began on September 11th, the day after his death. At a special meeting of the New York Letter Carriers’ Associate a committee was formed to collect donations for “a suitable monument to be placed over the remains of the devoted friend of the Letter Carriers of the United States.”

The monument, including the granite pedestal, was cleaned last in 1998.

President Grover Cleveland and General William Sherman were honorary pallbearers at Mr. Cox’s funeral. Louise Lawson, a young woman from a prominent Ohio family, was among the mourners. On October 4, 1890 The Illustrated American reported, “Louise Lawson is the sculptress who has been selected by the letter-carriers of the United States to execute a statue of the late Congressman Samuel S. Cox.” The French impressionist sculptor Pierre-Auguste Rodin (1840–1917) had instructed Miss Lawson for a year in Paris. This was her first important commission. 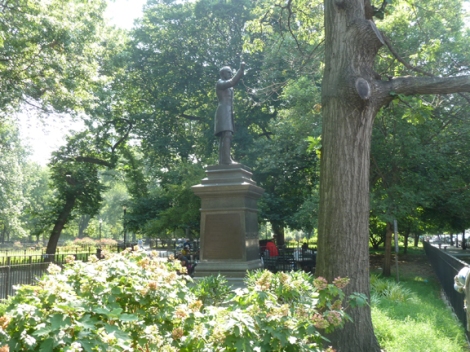 Mr. Cox is lost amongst the Tompkins Square greenery.

The postal workers wanted the monument to mark the final resting place of Mr. Cox, which is in  Green-Wood Cemetery, a National Historic Landmark in Brooklyn. Instead it was placed in Astor Place at Fourth Avenue. The monument’s cost was of over $10,000; of that sum, $8,965 was paid to the Miss Lawson. At its dedication on the 4th of July 1891, two thousand postal workers attended from Brooklyn and New York alone. A parade, making its way up Broadway from the post office at City Hall Park, marked the event; bands and a drum corps provided music.

Standing on a 12 feet high granite pedestal, the 8-foot bronze figure of Mr. Cox was draped with an American flag, ready for its unveiling. For the art critics it should have remained under cover. In opinion of the New York Times, “Whether it will ever be greatly admired as a work of art is doubtful.” And the New York Sun was not any kinder, writing, “It is a stiff, inartistic affair.”

This plaque lists the names of cities whose postal workers donated to the monument.

Mr. Cox was the postal workers’ hero; they cared not for these criticisms. Additional funds were raised through donations to pay for two bronze plaques that were added to the pedestal. One proudly proclaims, “Erected in Grateful and Loving Memory of His Services in Congress.” The other lists the names of the 187 U.S. cities whose postal workers made contributions.

If you were a 19th century postal worker, Mr. Cox was your friend.

In 1905 when streets around the Cox Monument were widened it was clear that it had to be relocated. The New York Times suggested a logical location, “the statue of ‘Sunset’ Cox, now on its travels, having been crowded out of Astor Place, would gain an explanation of its existence, and as much effect as its character would allow, if it were seen in connection with the Post Office, the subject’s services to the occupants of which it commemorates.” Instead, in November 1924, the monument to Samuel Cox was moved to the southwest corner of Tompkins Square Park in the East Village section of New York. Mr. Cox faces East 9th Street with his back to the park. There he remains, little noticed. Yet, without Samuel ‘Sunset’ Cox, American workers could not take for granted paid vacation time.

Given that Mr. Cox was a noted orator, it made sense at the time for Miss Lawson to depict him in a cliché speakers’ pose. By today’s standards, especially in the Big Apple, it appears that Mr. Cox is hailing a taxi!

One response to “Labor’s Victory: Paid Vacation and the Man who Made it Possible”