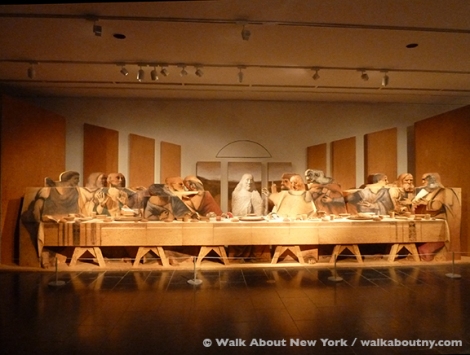 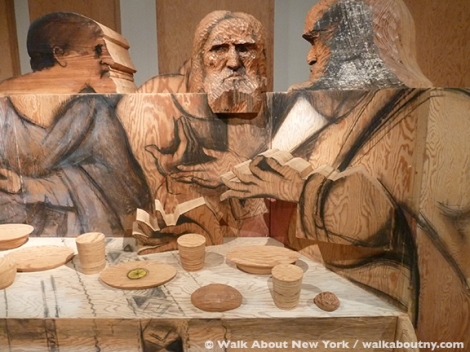 The 3-D hand gestures are startling.

The reaction by His disciples to the above statement made by Jesus Christ is the moment that is captured by Leonardo da Vinci in his well-known Last Supper, which was a celebration of the Jewish Passover Seder. Today, Maundy Thursday, during Holy Week, commemorates that meal. Here is a new look at the Last Supper, a familiar scene from this annual Christian observance.

Some figures’ arms continue across blocks of wood. 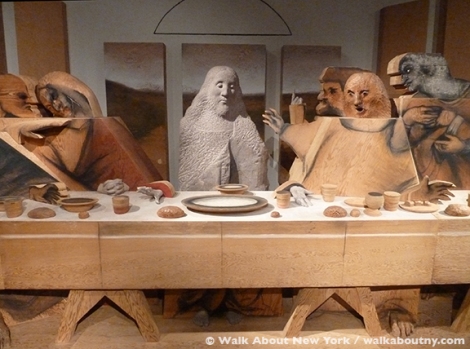 At the center sits Christ, peaceful amongst the confusion.

Self–Portrait Looking at The Last Supper by Maria Sol Escobar, known professionally as Marisol, is a monumental, mixed medium work of art, dating from 1984. Measuring 10 feet deep by 30 feet wide and 5 feet high, Marisol used wood that she painted and drew upon, plywood, brownstone, plaster and aluminum to create her interpretation of Leonardo da Vinci’s fresco, that decorates a wall at the Refectory of the Monasterio de Santa Maria delle Grazie in Milan.

Even the space between Christ and St. John is recreated.

The tablecloth patterns are in da Vinci’s original, though faded now.

Marisol’s sculptural assemblage matches the fresco’s length. She has faithfully reproduced the painting’s perspective in three-dimensional form, although the figures are never completely rounded or flat, neither two-dimensional or three. She plays with our perception of the familiar. It is this use of space, interpreting a universally recognized work of art into a totally new, yet not-so-new view that caught my attention.

A knife wielding hand is in the painting.

For a portion of this work, Marisol followed the environmentalist’s motto: Reduce. Reuse. Recycle. She chiseled the figure of Christ from a block of salvaged New York City stone. I am reminded of the Italians who built some of the churches in the very early Middle Ages; these resourceful men re-purposed columns and capitals, bricks and marble that had been part of Roman temples for their new temples. The figures of the 12 disciples and the table’s plates and cups are created from more than a hundred pieces of wood.

Plates, cups and bread are all recreated as in the original.

The artist, Marisol as witness.

In Marisol’s Last Supper there is an additional guest, the artist herself. Sitting opposite the tableau the artist’s self-portrait regards the scene, seemingly deep in thought about it. Marisol sculpted herself in the same rough fashion that she used for the other figures. Her presence emphasizes the fact that art is about observing, weighing, and reinventing what one takes in.

Christ is at peace amidst the confusion.

Looking serene and already otherworldly, Christ’s seemingly immoveable presence anchors the physical and emotional aspects of this dramatic scene. This is but one example how a work of art that hung in my childhood home has come live with a 3-D rendering. The gesturing hands and expressive faces of the disciples are other examples of looking anew at something so old. I feel as if I entered the Last Supper. It is quite extraordinary!

The Last Supper seen at an angle.

The Modern Circle, Tiqui Atencio and Ago Demirdjian made this installation possible, the first showing of the work in over 30 years. The 1986 gift from Mr. and Mrs. Roberto C. Polo could be seen in Gallery 909 of the Lila Acheson Wallace Wing for Modern and Contemporary Art Design and Architecture of the Metropolitan Museum of Art (MMA) from October 2014 to March 2015. Self-Portrait Looking at The Last Supper at MMA was seen concurrently and in collaboration with El Museo del Barrio’s exhibition MARISOL: Sculptures and Works on Paper, that ran from October 2014 to January 2015.

Marisol was born in France in 1930; her parents were Venezuelan. She grew up traveling between Paris, Venezuela and the United States. She studied art in Paris; and in 1950 she moved to New York, where she continued her art studies. Marisol’s work, although not easily categorized, is often grouped with America’s Pop Art of the 1960s because she uses popular culture imagery.

One response to “‘Supper,’ a Feast for the Eyes”