“Don’t worry when you are not recognized, but strive to be worthy of recognition.” —Abraham Lincoln (1809–1865) 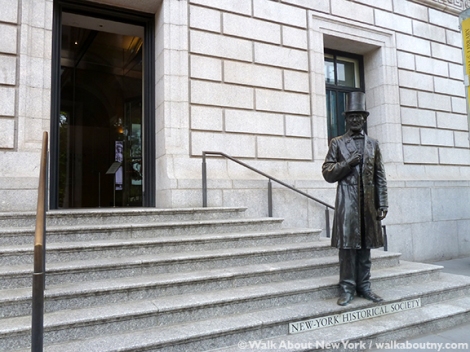 It is Honest Abe on the steps of the New-York Historical Society.

Today, the 207th anniversary of Abraham Lincoln’s birthday, Walk About New York recognizes another tribute to him, standing in New York. The sixteenth president of the United States is an easy figure to recognize. Standing on the Central Park West entrance steps to the New-York Historical Society, a 7-foot tall (including the top hat!) Mr. Lincoln cannot be mistaken for anyone else. With his stovepipe hat and commanding stature this figure greets passers-by, neighborhood residents, and museum visitors. 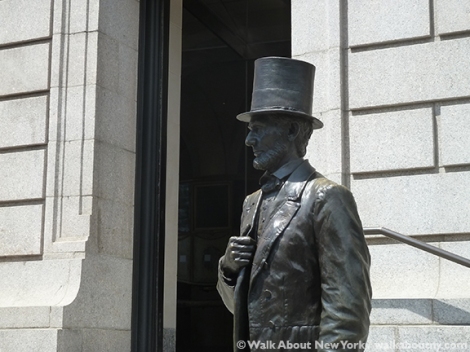 Seen in profile Abraham Lincoln is quite distinguished.

“Everybody likes a compliment.” —Abraham Lincoln

The worries of the Civil War prematurely aged Mr. Lincoln.

Created by StudioEIS at its foundry in DUMBO, an area of Brooklyn, this bronze likeness of Honest Abe was unveiled on October 25, 2011. StudioEIS conducted extensive research, down to the most exacting detail, to come up with a 21st century version of one of America’s most beloved presidents. Ivan Schwartz, a co-founder of StudioEIS, and supervisor of the sculpting process, even measured the black beaver top hat Mr. Lincoln wore to Ford’s Theater to create its bronze version. The Smithsonian Institution keeps the original. 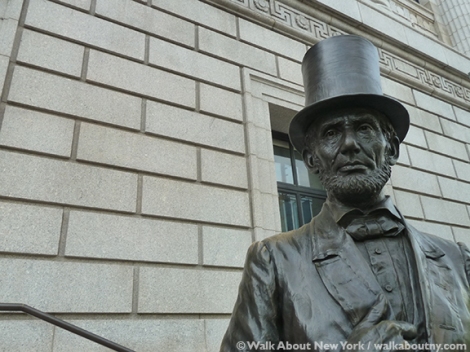 Like many other 19-century men, Lincoln wore a hat made of beaver fur.

“No man is good enough to govern another man without the other’s consent.” —Abraham Lincoln

Details include a buttons and a watch chain.

The intention of this life-size bronze figure of Abraham Lincoln is to bring to life the story of freedom, a deeply embedded part of American history, and an important focus of the New-York Historical Society’s programs. This is the third bronze of the Great Orator that StudioEIS has produced. In 2008 Mr. Lincoln and his horse were set up on the grounds of the Lincoln Cottage in Washington, D.C.; and in 2009 a seated Lincoln was unveiled at Gettysburg’s visitors’ center. There are more than 600 official presidential sculptures, and of that total more than one third are of Mr. Lincoln.

Phil, your Walk About New York guide, and Mr. Lincoln.

“Those who deny freedom to others deserve it not for themselves; and under the rule of a just God, cannot long retain it.” —Abraham Lincoln

Mr. Lincoln’s connection to New York City is strong; the city played a significant role in sending him to the White House. It could be said that Lincoln as the world knows him was created here. New York City’s politicians introduced him to local and national audiences. An informal “marketing campaign” by the city’s newspaper editors and image-makers successfully emphasized three facets of Mr. Lincoln’s story to the American public. They were the powerful orator at Cooper Union, the distinguished statesman seen in the photographic portrait by Mathew Brady, and the rail-splitting frontiersman, Honest Abe, who represented the American, self-made man.

Human hands are notoriously difficult to draw or sculpt.

“Sir, my concern is not whether God is on our side; my greatest concern is to be on God’s side, for God is always right.” —Abraham Lincoln

Throughout his political career Mr. Lincoln saw slavery as a moral and political problem, threatening the survival of the Union. Mr. Lincoln, born in Kentucky but identified mostly with the state of Illinois, came to national prominence when influential New York City abolitionists, including Horace Greeley, publisher of the New-York Tribune, helped place him at the top of the Republican ticket for the 1860 presidential election. Because New York City was a bastion of the Democratic Party, it did not vote for him in large numbers. It was a different reaction following his assassination on April 12th 1865; New Yorkers showed up en masse  to view his casket, lying in state at City Hall; and to be part of the funeral procession as it made its way through the streets of the city. 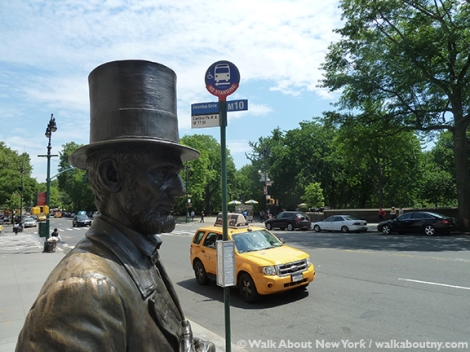 Read Lincoln, Standing in New York, last year’s celebration of Mr. Lincoln’s birthday. The New-York Historical Society is opposite to Central Park, which you can discover in detail with our guided walking tour. The Tour is good fun and greater value!