“I learnt sculpture by myself. I studied as a painter when I first came to New York. I didn’t go to college; I went to art school for a couple of years. But I learnt everything I know about sculptures from a book called Sculpture: Principles and Practice by Louis Slobodkin, a sculptor from the thirties.”
—Tom Otterness (1952– ) 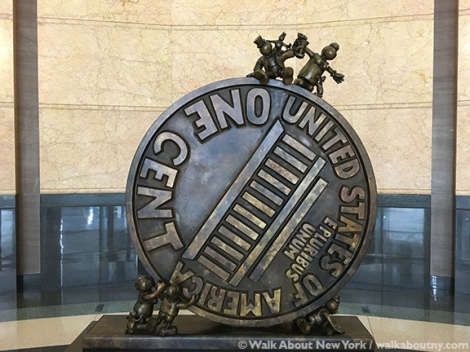 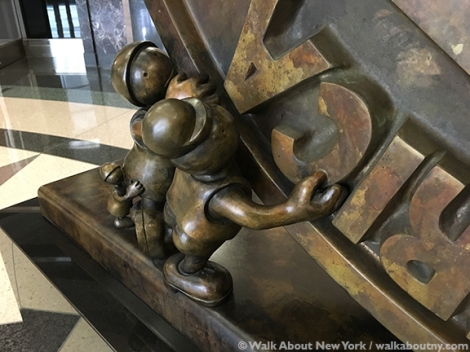 Rolling Penny, a whimsical creation typical of what we have come to expect from pop artist Tom Otterness, is 6′ high by 5.5′ wide by 1′ thick. It stands in the lobby, opposite the entry door to 1325 Avenue of the Americas in Midtown Manhattan. This giant version of the tail side of a Lincoln penny is enhanced with his signature little people. 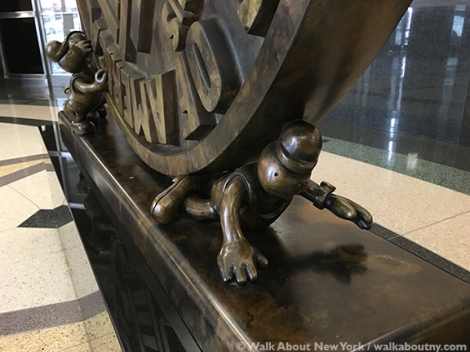 Created in 1993, the sculpture is bronze, the favored medium of Mr. Otterness. Because the artwork is set off from the wall it is possible to walk around it, seeing that the penny is a tails side on both sides. This is not the only version of the sculpture. A much smaller model is part of The Real World, an extensive art installation by Mr. Otterness. It can be found in Nelson Rockefeller State Park, the public park that is along the Hudson River in Battery Park City, the residential and office complex opposite the World Trade Center.

“It depicts the rich sitting atop the penny and drinking champagne, workers at the bottom pushing the penny over, and they are about to fall.”
—Tom Otterness 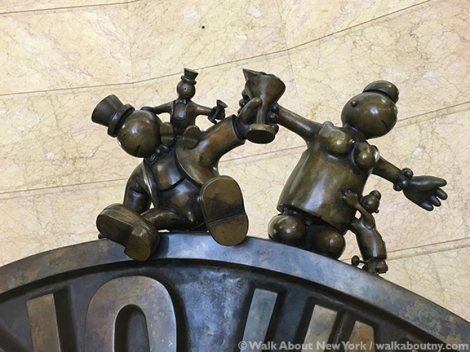 The sculpture goes beyond the role of a pretty or interesting work of art; allegory is a hallmark of Mr. Otterness’ work. In this case it is a depiction — with a touch of humor — of The Everyman struggling against forces larger than himself. The giant penny represents capitalism and the inequality that often results. Riding high, at the top of the penny, are four miniature figures who, with two wearing top hats and all drinking Champagne, represent the One Percenters. 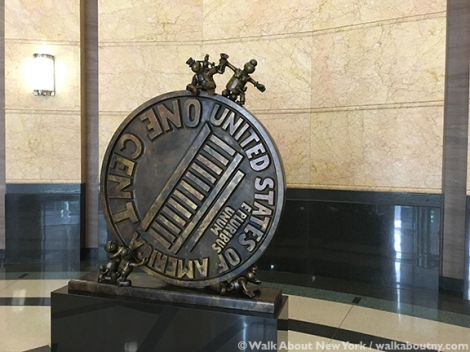 At the bottom of the sculpture, on the left hand side, are three figures who are pushing the penny; and in the process are trying to topple the One Percenters, that is, to bring change to the system. At the same time a fourth person, on the lower right, is being crushed by the large penny, symbolizing the downside of capitalism.

This theme of economic inequality also runs through Mr. Otterness’ Life Underground, which is the permanent art displayed at New York’s 14th Street and Eighth Avenue subway station. This station is a featured stop on our Subway Art Tour One. All Subway Art Tours will return to the schedule in January. Plus, Subway Art Tour Three will be launched at that time too; it is all new. Take the Tour; Know More!