“We’re so excited that our ‘Paparazzi Dogs’ are in New York. They’ve traveled the globe taking photos, and now they’ve arrived at this fun, trendy place that has been photographed more than anywhere else, and that leaves you feeling so stimulated.”
—Gillie, co-creator of “Paparazzi Dogs”

‘Paparazzi Dogs’ : ready for his close-up.

Whimsical and curious “Paparazzi Dogs,” by the Australian husband-and-wife team, Gillie and Marc, are waiting to snap your photo at Ruth Wittenberg Triangle in Greenwich Village. Most recently these doggone creatures stood beneath the Manhattan Bridge in the Pearl Street Triangle, as well as at the entrance to the Main Street Dog Run at Plymouth and Adams Streets, both in Brooklyn.

Three out of four of the ‘Paparazzi Dogs.’ 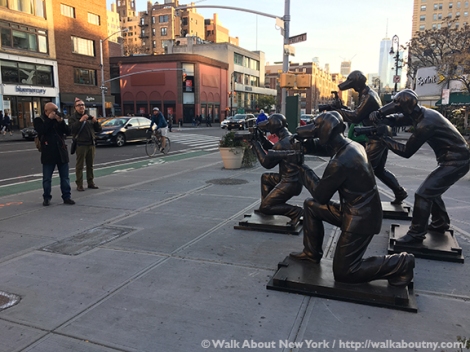 First appearing in 2013 the interactive “Paparazzi Dogs” have attracted millions of fans in Melbourne, Sydney, Singapore, Beijing and Shanghai. They have been transformed from art and social commentary to sought-after celebrities themselves. 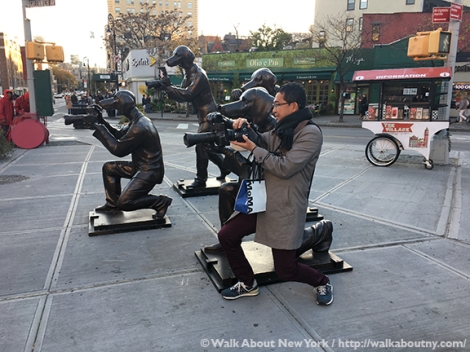 Over the past 10 years modern-day society has become obsessed with photographing life’s every moment. We photograph everything from our breakfast to numerous selfies at every venue. If we are not recording our own experiences, we’re eager to see others’, especially celebrities’. When does our hunger to see celebrities grocery shopping or sunbathing veer into dangerous territory? 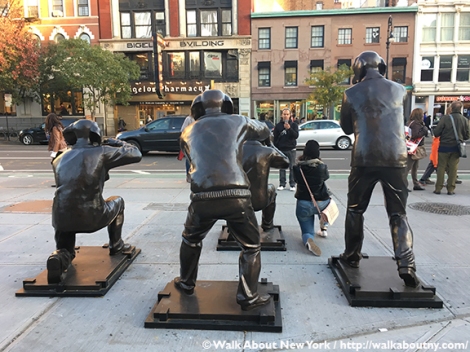 ‘Paparazzi Dogs’ : photo-op for many.

Gillie and Marc have given names to each of the “Paparazzi Dogs.” They are named for members of the British Royal Family, Charles, William, Harry and Tom. With this sculptural grouping the goal of the artists is to encourage the public to think about the tragic and avoidable death of Princess Diana. The photographers are intentionally portrayed as dogs; this emphasizes the pack mentality among the media, which dangerously hunt down celebrities with the hope of getting a “behind-the-scenes” peek into their private lives. 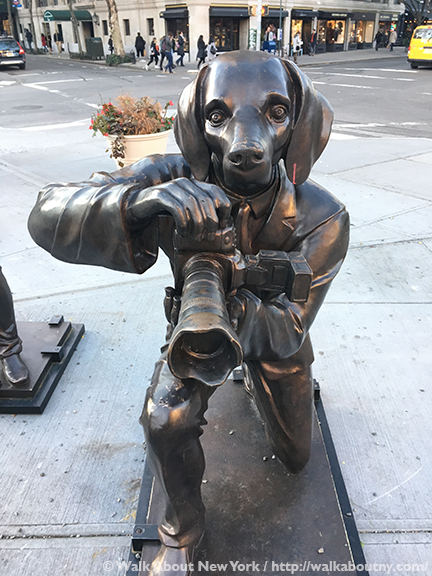 Another close-up of ‘Paparazzi Dogs.’

Gillie and Marc have collaborated to create art for over 25 years. They are based in Sydney, Australia. Having met in Hong Kong, at once they knew they were soul mates. Gillie was a nurse from England and he was a boy from the Melbourne suburbs. Seven days later they were married in the foothills of Mount Everest.

Gillie and Marc work in several artistic media, including painting, sculpture and photography. Their goal is to create works that are at once joyful, thought provoking and interactive. Their artworks are unlikely combinations that are designed to inspire us to take a second look at the world around us. Private and public collections around the globe have included their works in their holdings.

Named in 1990 to honor Brooklyn native Ruth Wittenberg (1899–1990), this triangular patch is bound by Sixth Avenue on the east, Greenwich Avenue on the west and West Ninth Street to the north. Ms. Wittenberg was a civil rights activist, who marched with Martin Luther King, Jr. in Selma, Alabama. For 40 years Ms. Wittenberg served on New York City’s Community Board 2, which includes Greenwich Village. Through her efforts the Women’s Detention Center, which once stood opposite to the traffic island named for her, was closed and demolished. The lovely and vital Jefferson Market Garden occupies that space today.

When you are part of our Greenwich Village Walking Tour  you will discover “Paparazzi Dogs” (for as long as they remain at Ruth Wittenberg Triangle) and much more. Take the Tour; Know More!