In honor of International Women’s Day, March 8th 2017, we are highlighting the accomplishments of some of the women who you will cross paths with when you are part of our guided walking tours.

Mrs. Roosevelt is featured on the Gay Village Walking Tour at two locations. The plaque pictured is affixed to 29 Washington Square West. Mrs. Roosevelt lived in apartment #15A; she lived here in the late 1940s, when she was a member of the committee that drafted the Universal Declaration of Human Rights for the United Nations. 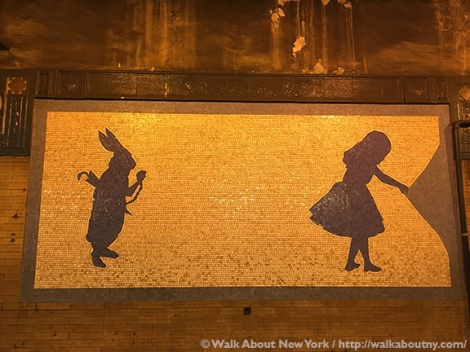 One of four ceramic mosaic panels by Liliana Porter in the NYC subway.

Liliana Porter, born in Buenos Aires, Argentina in 1941, is a contemporary artist. Her 1994 ceramic mosaic series titled, Alice: The Way Out was inspired by Lewis Carroll’s Alice’s Adventures in Wonderland. Enjoy this modern take on the children’s classic tale included on Subway Art Tour One at the 50th Street subway station.

The Angel of the Waters was sculpted by Emma Stebbins in 1864.

The Angel of the Waters that tops the Bethesda Fountain in Central Park was the only sculpture that the Park’s designers had included their 1859 plans. The woman who sculpted it, Emma Stebbins (1815–1882) is a permanent resident at Green-Wood Cemetery, a National Historic Landmark in the beautiful borough of Brooklyn. Her grave is a stop on our Gay Graves Tour at Green-Wood, and her most famous work of art can be seen during Central Park Walking Tour. 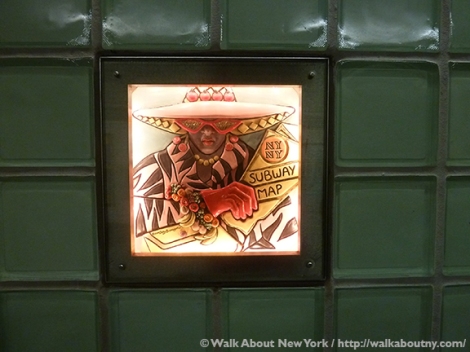 One of 35 pop art ceramics by Toby Buonagurio at the Times Square subway station.

The sprawling Times Square/42nd Street subway station overflows with art in a variety of media. A major contributor is Toby Buonagurio, a ceramic artist and a lifelong resident of New York City. A portion of her pop-art influenced ceramic art installation titled, Times Square Times: 35 Times from 2005 is included on Subway Art Tour One.

In 1923 Edna St. Vincent Millay was only the third woman to receive the Pulitzer Prize for poetry. During the free-wheeling 1920s she lived with her husband, Eugen Jan Boissevain (1880–1949) in Greenwich Village on Bedford Street, in what is believed to be the narrowest house in New York. Both the Greenwich Village Walking Tour and the Gay Village Walking Tour include this sight.

One of several coffee cups part of “Blooming” by Elizabeth Murray.

And it is coffee cups that figure prominently into the fabulous, whimsical, mosaic artwork, titled Blooming, that Elizabeth Murray designed for the Metropolitan Transportation Authority’s Arts and Design program. Be enveloped by this work of art on Subway Art Tour Three. Ms. Murray was a revolutionary woman in the art world of 1970s New York; she wanted to be a creative force in the world and a wife and a mother. She achieved all three of these goals.

Ms. Oakley’s grave is a featured stop on our Gay Graves Tour at Green-Wood Cemetery. She was a groundbreaking muralist in the early 20th century. At a time when it was believed that women did not have the physical capability or the intellectual capacity to tackle large and complex mural projects, Ms. Oakley proved the naysayers wrong. Her16-year-long project at the Pennsylvania State House in Harrisburg is a masterpiece of the muralists’ art form.

The centerpiece to “Trade, Treasure and Travel” by Margie Hughto.

Margie Hughto is a ceramic artist and a professor of ceramics at New York State’s Syracuse University. Trade, Treasure and Travel, her 11-panel, 1,500-piece ceramic art installation, is the high point of Subway Art Tour Two. Initially installed in 1997 it had to be removed when the Cortlandt Street subway station was closed for renovations following the World Trade Center tragedy on 9/11. With the station spruced up the work was re-installed in 2011.

“Give me your tired, your poor,
Your huddled masses yearning to breathe free,
The wretched refuse of your teeming shore.
Send these, the homeless, tempest-tossed, to me:
I lift my lamp beside the golden door.”
—from “The New Colossus” by Emma Lazarus (1849–1887)

Ms. Lazarus was an established poet when she was asked to contribute to an auction that was raising money to build the pedestal for the Statue of Liberty. “The New Colossus” is the sonnet she wrote for the request. Her father, Moses Lazarus, a wealthy sugar merchant, bought a house on West 10th Street in 1883. Discover it and much more on our Greenwich Village Walking Tour.

ALL PHOTOS AND TEXT, EXCEPT NOTED QUOTES, © THE AUTHOR 2017