Keep in mind that the Gay Graves Tour is given by special arrangement only. 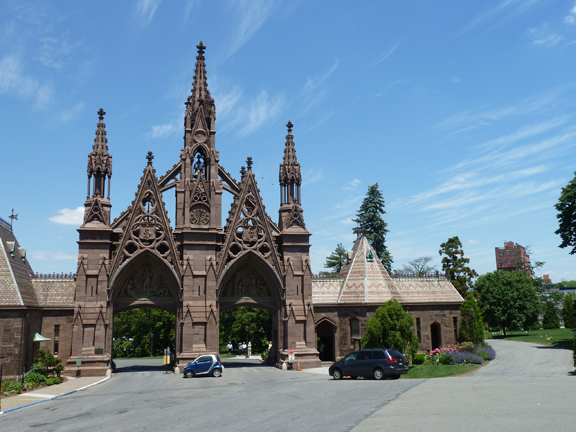 This the inward-facing side of the fabulous entry gate at Green-Wood Cemetery. 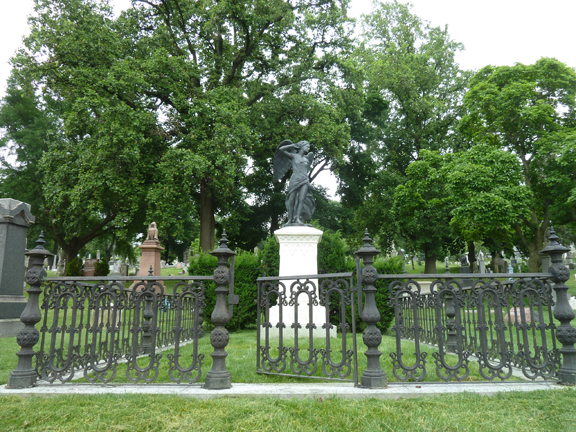 The fencing around Louis Moreau Gottschalk’s grave is a rarity. 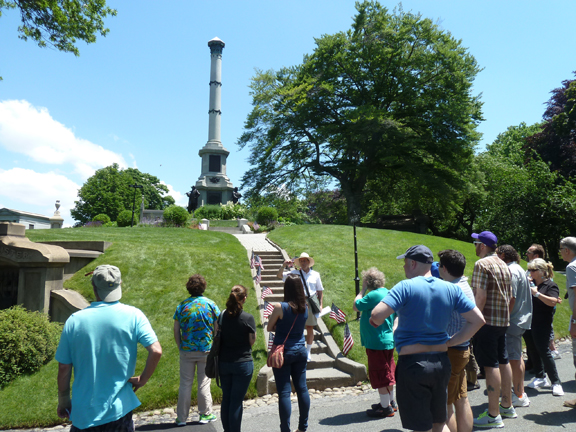 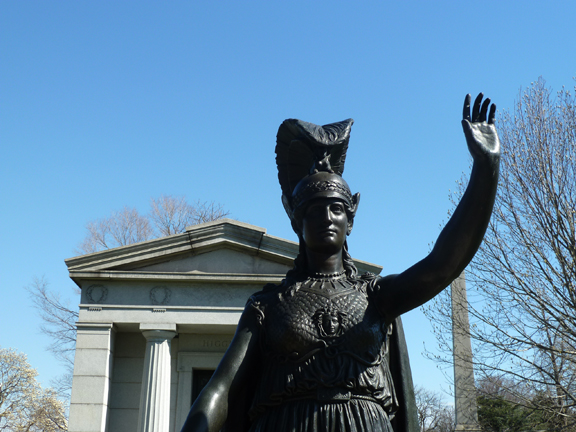 Who is the Roman goddess Minerva waving to? 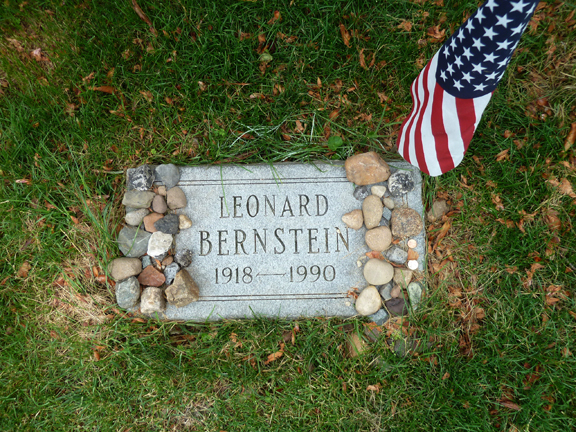 Maestro Bernstein is one of four composers on the Gay Graves Tours.

This LGBT-focused tour of Green-Wood Cemetery, a National Historic Landmark in the beautiful borough of Brooklyn, is the only one of its kind. It has been specially developed to introduce you to the famous and the not-so-famous gay men and lesbians, their friends, their supporters and their detractors who are among the permanent residents at Green-Wood.

This Tour is conducted entirely on foot. It really is a hiking tour rather than a walking tour because of the amount of territory it covers and the hilly nature of the land. Time passes quickly because at every moment we are surrounded by beauty, both man-made monuments and nature’s artistry.

Beginning at Green-Wood’s fabulous brownstone entry gate, the tour moves on to the graveside of piano virtuoso and composer Louis Moreau Gottschalk, the 19th-century Liberace.

We pass a pyramid on our way to Battle Hill, the highest natural point in Brooklyn. Located here are several important sights. These include New York’s memorial to its fallen Civil War soldiers; Minerva, a monument to the Battle of Brooklyn, fought during the Revolutionary War; and the grave of Leonard Bernstein, choosing prime real estate for his final resting place.

We have a muscle man on the Tour, a 1920 marble sculpture titled Civic Virtue. Learn its connection to a “neglectful daughter” and a former U.S. congressman from New York City. A hero and a villain are included; Dr. Richard Isay is our hero. Who could the villain be? Join us to find out!

Violet Oakley and Emma Stebbins are the lesbian artists of the Tour. Miss Oakley was the first woman to be granted a major commission to paint a series of murals in the Pennsylvania Statehouse. Miss Stebbins sculpted the Angel of the Waters at Central Park’s Bethesda Fountain; this bronze influenced a groundbreaking, Pulitzer Prize-winning Broadway drama musical.

Paul Jabara was an Oscar- and Grammy-winning songwriter, as well as a Broadway actor, dancer and singer. Mr. Jabara’s grave is the fun stop on the tour; you will know why if you like disco music from the 1970s and 1980s.

Green-Wood’s stunning Historic Chapel, built by Warren and Wetmore, the firm that designed Grand Central Terminal, is clad in Indian limestone. We visit its interior with a series of dazzling stained glass windows at the end of the tour.

Although this Tour highlights the gay men and lesbians at Green-Wood, it is not limited to them. We would be remiss if we ignored Elias Howe, the Tiffany family, Frank Morgan (a.k.a. the Wizard of Oz) and others who are at eternal rest here. Amid the centuries-old trees, the fabulous works of art, and the bucolic surroundings enjoy a unique dose of gay history, New York history and U.S. history at Green-Wood Cemetery.

Our Gay Graves Tour is seasonal. It is offered in the spring to appreciate the blooming Kwanzan cherries trees, and in the autumn to enjoy the changing leaf color of Green-Wood’s 800 trees, as well as by special arrangement for private groups.

The Tour’s cost is $35 for adults, $25 for seniors 65 years and older, and $20 for youths 13 to 18 years of age. Please consult the Calendar Schedule for the dates of the Gay Graves Tour. Click on the “Book Now” button at the top of the page or below to book your place. The Tour runs 2.5 to 3 hours. Bookings must be made at least 36 hours before the Tour begins.

The terrain of this walking tour is very hilly. Please wear comfortable shoes. You will get a solid hiking workout on this Tour! It is strongly suggested that you travel light; we are on our feet for the entire time. Heavy backpacks and shopping bags can only distract from your enjoyment of the Tour.

Green-Wood Cemetery is at Fifth Avenue and 25th Street in Brooklyn. We gather in front of the large Gothic, brownstone gate, which is set back from the street. The 25th Street stop of the R train is only one block from Green-Wood. Turn right after surfacing from the subway; walk one block to the cemetery.

All sales are final. The Gay Graves Tour will take place rain or shine. All tours are conducted in English. All Tour participants assume normal liability for their behavior during the Tour.

Come along, let’s talk about and walk about New York! 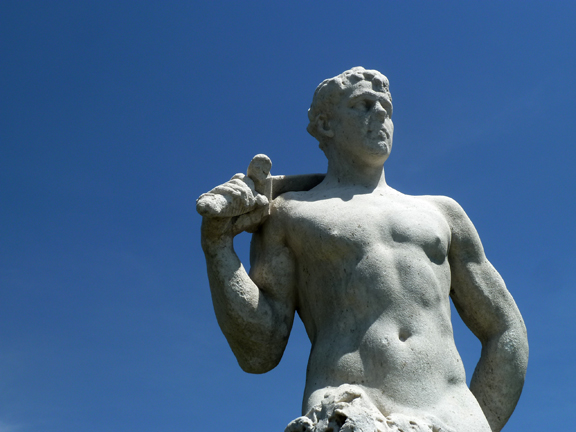 Green-Wood has its own marble muscle man, “Civic Virtue.” 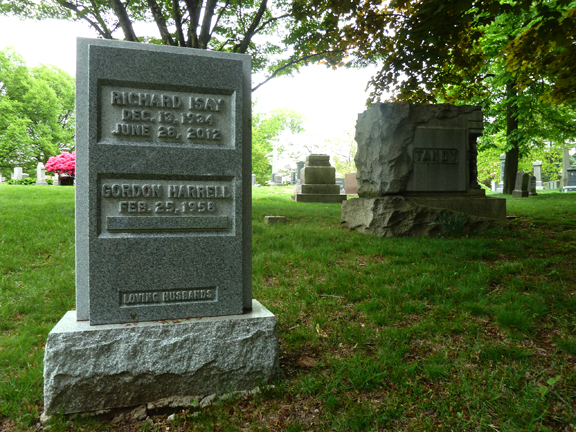 Dr. Richard Isay is the tour’s hero. There is also a villain. 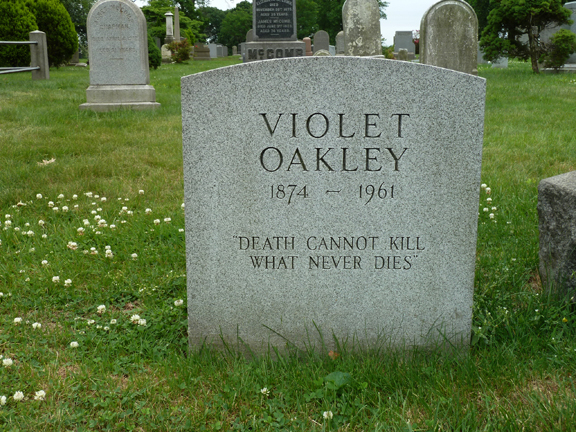 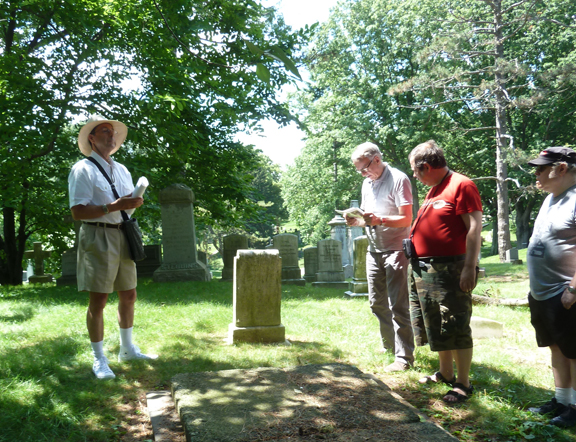 The gravestone of Emma Stebbins is well-worn marble. 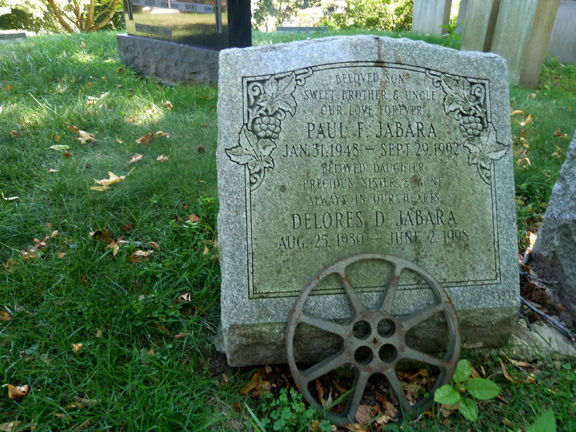 An empty film reel at Paul Jabara’s headstone celebrates his connection with the movies. 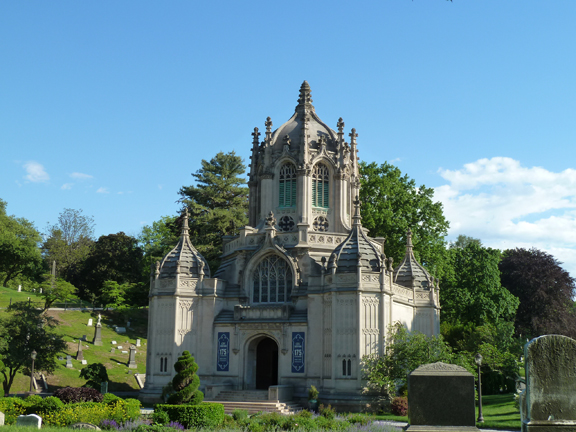 3 responses to “The Gay Graves Tour”