There were clowns and so much more at New York premiere of Cirque du Soleil’s latest touring show, “Amaluna.”

For the second year in a row, Cirque du Soleil pitched its tents in the parking lot of Citi Field, home to the Amazin’ Mets! Getting to the venue on the #7 line of New York’s subway system was a snap; the ride took about 30 minutes. The #7 runs express during rush hours; with an 8 PM show time, leaving during the rush hour was a necessity. Our train was packed with others headed to the circus; we were in good company. 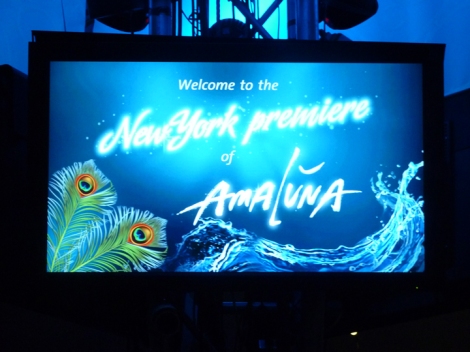 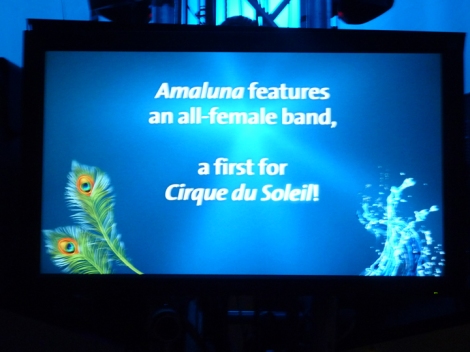 Like an otherworldly scene, Cirque du Soleil’s tents were visible from the subway platform. 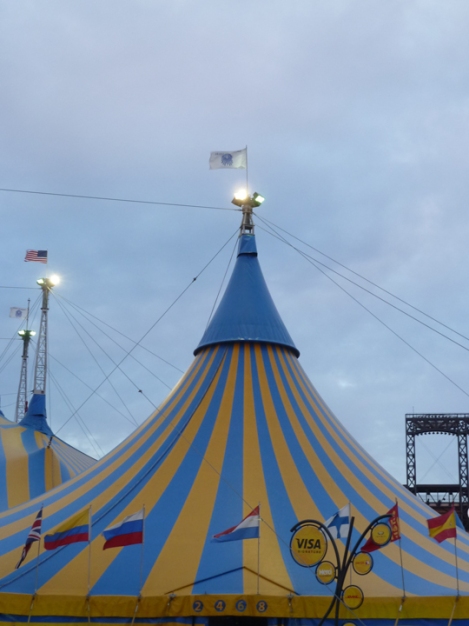 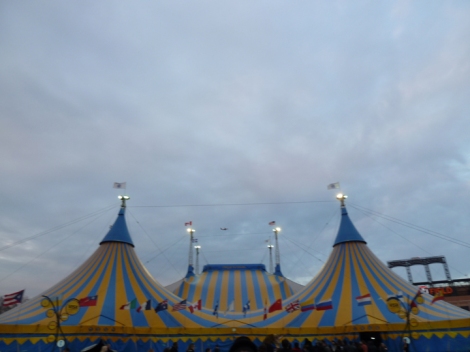 The familiar gold and blue stripe peaks welcomed us.

I posed with a stilt-walker and her gossamer wings.

I felt the excitement building as soon as the circus tents came into view; they were visible from the subway platform. The crowds had begun streaming into the Cirque du Soleil’s specially enclosed space. 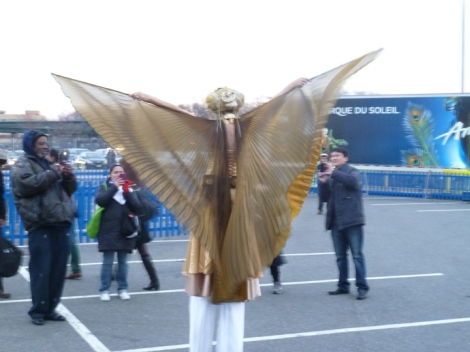 Poised for take-off, a stilt-walker poses for the cameras. 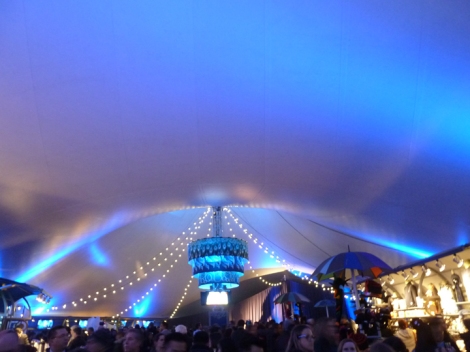 Inside the tent colors and crowds created a festive atmosphere.

A bit of gender-bending: a female performer as a peacock! 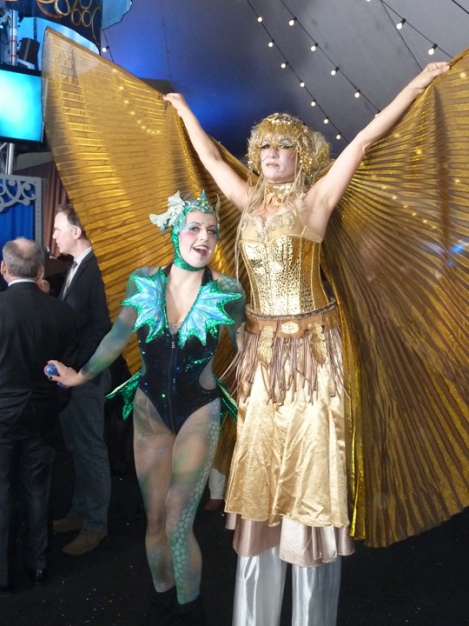 Side-by-side performers get the crowd in a playful mood.

Stilt-walking performers greeted guests, posing with the willing. And who would not be willing? Foam clown noses were being distributed by the stilt walkers. Fun was in the offing.

Inside the tented lobby Champagne and hors d’oeuvres were being handed out. Cirque du Soleil’s characteristic Euro-inspired contemporary music was playing in the background. A gift boutique was arranged along the far side of the space. T-shirts, hoodies, masks, even a spiky wool hat were for sale; all were aimed at prolong the buyer’s Cirque du Soleil memories.

A great deal was made of the performer composition for this show. It was proudly announced that the performers were 70% female; and the band was the first all-female band in the company’s history! Peacocks are featured in the show. The show’s creators exercised poet license with nature; the peacock roles were assumed by women! In the wild it is the male who is the flashy figure; in human company it is woman.

Not performing in the show, Mr. Body Paint’s role was to get painted!

Smiling for the camera, this creature spreads her gossamer wings.

Because the costumes for some characters were painted directly on their skin, a how-to, body-painting station was set-up in the lobby. Slowly, throughout the night the young man’s “outfit,” in shades of blue and white, emerged across his torso.

All Cirque du Soleil shows always have a narrative. This show, in two acts with an interval, as the intermission is called in Europe, focused on a boy-meets-girl, boy-loses-girl, boy-wins-girl storyline. Our girl, Miranda is a contortionist and our boy, Romeo is an acrobat.

Because I am dazzled by the circus acts, scenery, costumes, lighting—the spectacle of it all—I usually lose track of the story’s thread. Although I titled this posting “An Adult Circus Comes to Town” there is nothing X- or even R-rated about it. It is G—for great! There were very few children in this audience or any Cirque du Soleil’s performance that I have attended. About those clowns, between the circus and dance acts another romance blooms. These characters are “of a certain age” when true love finds them in amusing situations.

Many pop culture images come to mind with her wings spread: Batman, Dracular and his cape.

The dramatic effect of the lighting gives this photo an “Angels in America” look.

A cream-colored bustier and a gold spangled hood are a lovely look.

Classic circus acts, such as Spinning Watermeteors, the Uneven Bars, the Teeterboard, the Chinese Pole, Juggling, and Aerial Straps combine with several dance routines to entertain and delight. One of the most mesmerizing acts was the Balance Goddess. She created a mobile from thirteen palm leaf ribs. With deliberate movements the Balance Goddess creates an atmosphere that had me holding my breath in anticipation.

I am relishing the memory of “Amaluna” while anticipating Cirque du Soleil’s next offering!