Green-Wood Cemetery, a National Historic Landmark in Brooklyn, NY, is 478 acres of century-old trees, in addition to its century-old permanent residents. Oh! it is true that the cemetery remains active; and there are several years of interments remaining there. Many of the notable, and not-so-notable, folk have been there since the 19th century, counted among them are 6,000 Civil War soldiers. That includes those who were lost in the war as well as veterans who died shortly after, or long after the conflict ended.

Each spring the Kwanzan cherry tree blossoms announce that soon all the trees will be in full leaf. The touch of pink that they add to the gray granite monuments is a happy sight.

Here are the colors as I saw them during my Wednesday visit to the final resting place of Elias Howe, Lola Montez, Leonard Bernstein and others for a total of 568,000.

I will be guiding tours, on a cute little green trolley, through Green-Wood beginning Saturday, the 14ht of June.

“When spring came, even the false spring, there were no problems except where to be happiest. The only thing that could spoil a day was people and if you could keep from making engagements, each day had no limits. People were always the limiters of happiness except for the very few that were as good as spring itself.”
—from “A Moveable Feast” by Ernest Hemingway (1899–1961)

Green-Wood Cemetery’s Historic 1911 Chapel was designed by Warren and Wetmore.

She turned to the sunlight
And shook her yellow head,
And whispered to her neighbor:
“Winter is dead.”
—from “When We Were Very Young” by A.A. Milne (1882–1956) 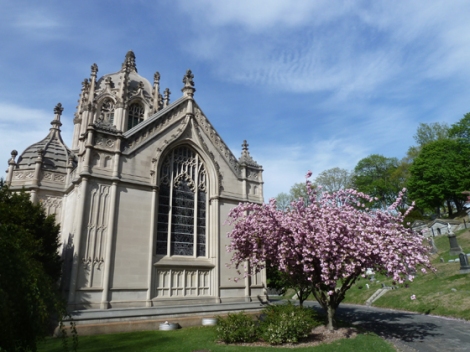 Made of Indian limestone, the Historic Chapel sits in a former glacial lake. 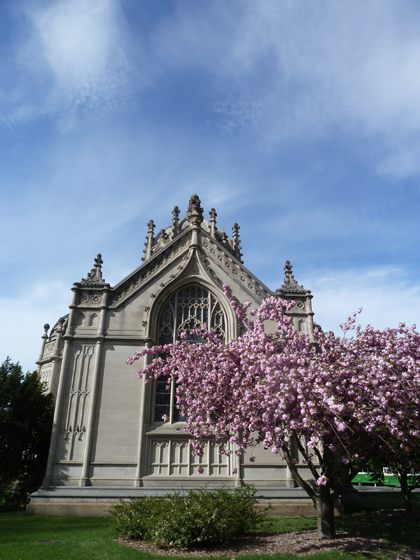 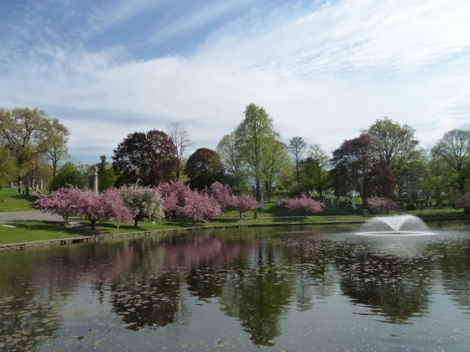 Valley Water is one of four remaining glacial ponds at Green-Wood.

This is a peaceful place to sit on a bench, eating lunch, which I did!

“If winter comes, can spring be far behind?”
—from “Ode to the West Wind”
by Percy Bysshe Shelley (1792–1822)
We hear this line often repeated; now we know where it originated. 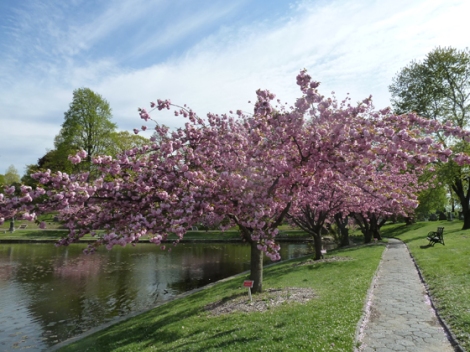 “Let us be grateful to people who make us happy, they are the charming gardeners who make our souls blossom.”
—Marcel Proust (1871–1922) 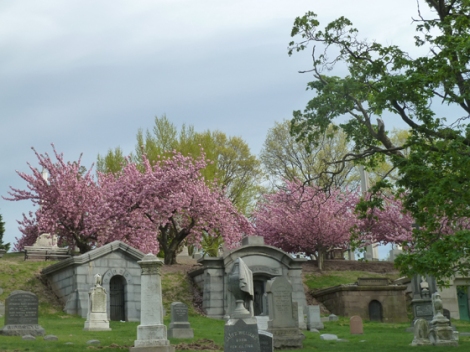 “The artist is the confidant of nature, flowers carry on dialogues with him through the graceful bending of their stems and the harmoniously tinted nuances of their blossoms. Every flower has a cordial word which nature directs towards him.”
—Auguste Rodin (1840–1917)

The Van Ness-Parsons pyramid-shaped mausoleum can be seen in the lower right.

“Break open a cherry tree and there are no flowers, but the spring breeze brings forth myriad blossoms.”
—Ikkyu Sojun (1394–1481, Japanese poet)