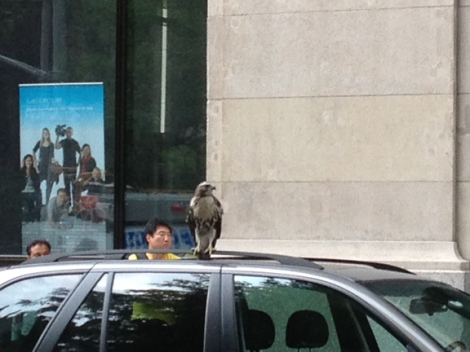 At the corner of Fifth Avenue and 12th Street, only six blocks north of its home, one of the red-tailed Peregrine Falcons that nest at New York University found a new use for a car’s roof rack.

Was this the Peregrine Falcon named Violet or her mate, Bobby? The female is named for the university’s colors; and the male is named for Elmer Holms Bobst Library, where they have made their home. Over the years this fine-feathered couple has raised a fair number of hatchlings. The nest is located outside the 12th-floor office window of Dr. John Sexton, president of New York University. 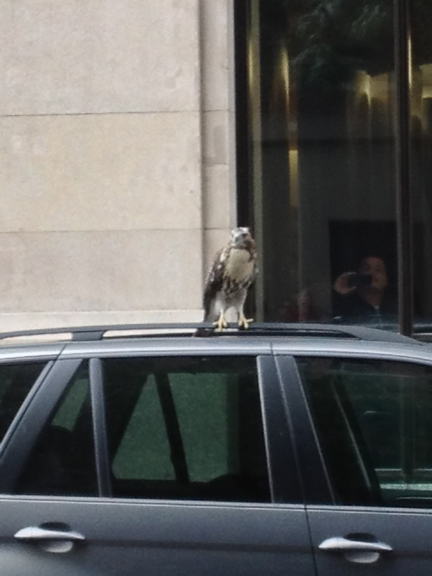 Until earlier this year a webcam, placed inside the library, had given the world a daily view of the Violet and Bob’s life. The webcam was removed because it could no longer photograph clear images of the birds. To shield the birds and their young from the prying eyes of their human fans in the library office, the window through which the webcam operated had been covered with a film.

Violet and Bob are one of 16 Peregrine Falcons pairs, or 32 falcons in total, that are making a comeback in New York City. They live year-round in unique places about the City such as bridges, church steeples and high-rise buildings, including NYU’s Bobst Library. 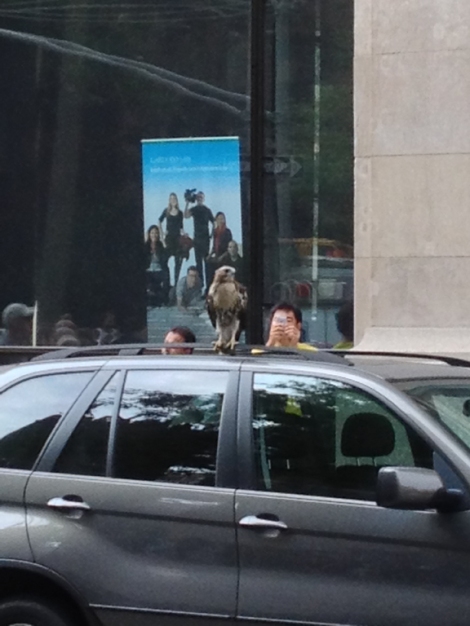 According to NYU’s environmental studies professor Colin Jerolmack, “The hawk cam and others like it are valuable tools for helping people realize that the city is an ecosystem. If these cameras make people feel more curious about and connected to the nature around them … then the cameras can actually become tools for fostering ecological concern.”