“ ‘Antiques Roadshow’ is my favorite show. Every Monday night I have one hour of appointment television. I get the popcorn out and tell my husband, ‘Don’t bother me.’ ”
—Lara Spencer (1969– , hostess of “Antiques Roadshow” for the 2004 and 2005 seasons)

Tickets, a program and a newsletter from at the Antiques Roadshow, New York edition.

Toward the tail end of its annual summer tour, the “Antiques Roadshow” came to the Big Apple on Saturday, the 9th of August. Held at the Jacob K. Javits Convention Center, this was the second time that the “Roadshow” gave New Yorkers a chance to find out if their attic or basement is home to a priceless treasure. Getting an appraisal on Dad’s dumpster discovery, Mom’s antiquing acquisition or Little Johnny’s flea market find turned into a multi-hour affair. We arrived at 1:30 PM; we left, none the richer, at 6:30 PM! 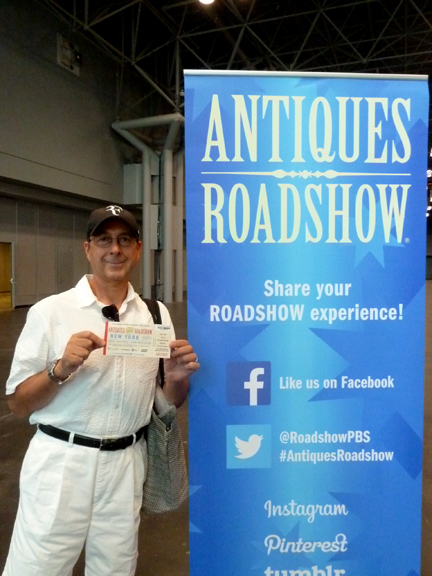 With my ticket I was good to go.

With my admittance ticket in hand, I was ready to start my experience of the “Antiques Roadshow,” which was one of the first reality TV shows! Following the sign’s urging, I am sharing my “Roadshow” experience online!

Once inside the convention center, to reach the area where the “Roadshow” was being held, we entered beneath an arch, decked out in the red, yellow and orange signature colors of the “Roadshow.” The owners of this wooden chest were told that it was made in Pakistan during the 17th century as a grain bin! They use it as a dining room chest. Its value, even with the damage, was $5,000! 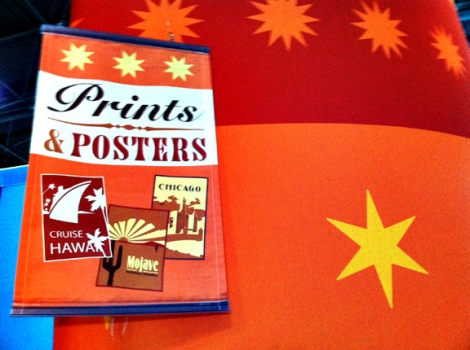 The prints and posters line was seemingly endless!

The prints and posters queue was very long. I stood there for more than two hours! Each would-be treasure holder is allowed two items for appraisal. After standing in a general-admission queue, I was directed to a table where I was questioned about what sort of items I had brought. The man asking the questions then determined where the items would fit best for appraisal. I was given two tickets, one for photos and one for prints. 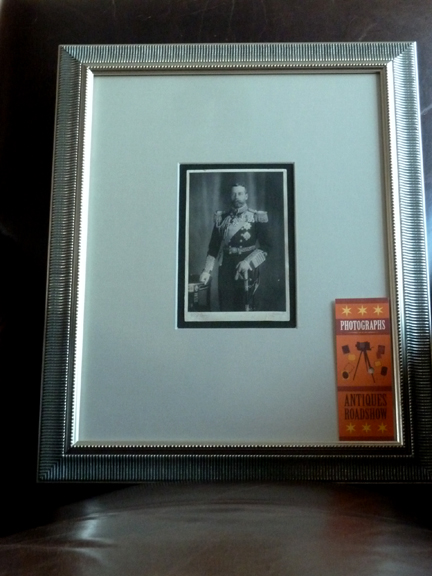 George V wears an admiral’s uniform, with his sword at his side.

After getting into the appraisals and set area, I went to the queue for photographs, which was much shorter than the one for prints and posters. I had won this photo of England’s George V at the Sotheby’s 1998 auction for the belongs of the Duke and Duchess of Windsor. The duke had had this picture of his father, along with many other photos, in a plywood-covered bathtub in his private quarters at his château outside Paris. The photo was valued at $2,000!

The 1837 English print of a Roman scene that I brought for appraisal.

During a 2000/2001 Christmas/New Years trip to Rome, I bought this print from a print shop near my second-favorite Roman square, Piazza Navona. I do not remember what I paid; the Italian lira, with its screwy exchange rate, was still in use at the time. I like it because of the colorful and exciting scene; it is a memento of our visit to Castel Sant’Angelo during that trip. I was told that it was one of many made as part of a series of Roman views; its value is $50 to $75. The appraisals are verbal, not written.

The queue for the prints and posters appraiser was an excellent spot for waiting. Mark Walberg, host of Antiques Roadshow, was taping the opening segment and others nearby. He is a friendly guy; and was most accommodating with all requests for photos. He chatted with the group that I had become part of. Someone pointed out that he has the same name as the action-hero movie star. The genial host pointed out that their names are spelled differently and that he has been Mark Walberg longer! 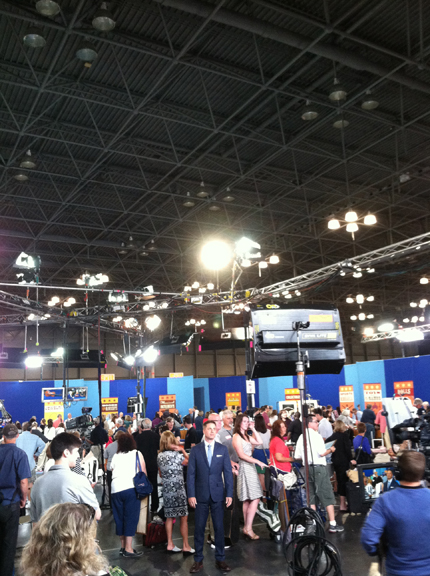 A patient crowd served as a backdrop for Mark Walberg.

Host Mark Walberg, standing on the set, faces the camera to deliver his lines. He ran through several takes to get it right! Mr. Walberg can be seen at the bottom center of the photo. 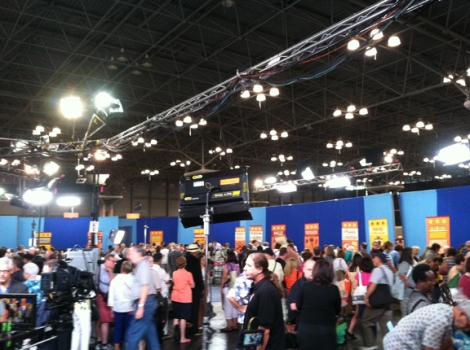 An overview of the compact set for the “Antiques Roadshow.”

The Roadshow set is created from movable partitions that were arranged in a circle at the center of a cavernous hall at the Javits Center. Tables, strewn with electronic devices and papers, and with the appraisers seated behind them, were arrayed along the perimeter of the circle. The most of the televised segments are taped at the circular set’s center.

An on-air instrument appraisal preps for the camera.

The women who had waited behind me in the prints and posters queue excitedly told me that I was in the background while this banjo-appraisal segment was being taped. To which I responded, “I am ready for my close-up, Mr. DeMille.” I watch each episode of “Antiques Roadshow;” I will pay special attention to New York edition. Many of the staff members were volunteers; most had been teachers or otherwise involved in the education field

Leslie Keno, left, joked that he is the better looking twin that girls wanted to date!

Leslie Keno was very kind to stop to pose with me. He was in a dash; and he did not stand still so well, resulting in the blur. Mr. Keno and his identical twin brother Leigh are the celebrity appraisers of 18th- and 19th-century American furniture. Two of women in the prints and posters appraisal waiting queue with me had brought 19th-century furniture; the Keno Brothers would have appraised it, if the women were not wearing perfume. The Keno Brothers suffer from an allergic reaction to fragrances. Those women explained to me that a fragrance pre-screener made her way down the line of expectant treasure holders of American furniture, selecting people who were not perfumed; the Keno Brothers would see only them.

All hopeful treasure holders were orderly; the Parisian gendarme was not needed to keep the peace.

This figure looks as if it is a 19th-century, Parisian gendarme. Whatever could it have been originally? I guessed that it had been a sign of some sort; but I did not ask the man who was carrying it. Some people collect the most curious things!

Old toys were trucked about in a modern wagon.

A plastic wagon is used to cart a metal toy fire truck and a model car perched on top of it. These toy vehicles were appraised as a lot for $200. As a child, I had a toy car, somewhat the same size as the fire truck. My car was handed down to my nephew, who gave it much more use than me; it was discarded long ago.

Tables and a chest await their moment of truth.

Because many New Yorkers do not own cars and trucks, fewer pieces of furniture were brought to this “Roadshow.” Those who did bring furniture must have been from outside the city. The table’s top, on the left hand side, is not missing; it was left at home. Made of marble, it was too heavy to carry along. The upside down chest on the right hand side had stamped tin panels decorating its front and sides. Notice the chair in the left hand photo at the lower right; they were scattered about to help relieve the stress of the long hours handing on the unforgiving concrete floors.

What with all the standing required, it was smart to bring a chair for appraisal and for comfort!

Despite not having convenient means of transport to get them to the “Antiques Roadshow,” I noticed many chairs were brought for appraisal. The one on the left dates from 1948. It does not have any makers’ marks; but it was appraised at $1,500 for a pair. Its mate was left at home. The chair on the right was not an Eames chair, but a knock-off, valued at $50. Notice in the background of the faux-Eames chair photo, a TV segment is being taped. The young man on the left brought great-granddad’s gold pocket watch.

The mystery portrait: who is she, who was the artist?

The man, propping up this oval portrait in the tattered frame, had no idea who the subject was, or who the painter was. He told me that he was hoping it was a 17th-century original; but he was prepared to accept that it was a 19th-century copy. The queue for painting appraisals was as long as the prints and posters appraisal queue.

Hopefully she got a fruitful appraisal.

This is one of the women with whom I waited in the prints and posters appraisal queue. Because the wait time is so very long we amused ourselves with banter about the process, what we hoped our treasures were worth, etc. One man, who had immigrated to the USA from Poland in 1980, had brought what he thought was a Marc Chagall print; he was told it could not be by Chagall because the style was not that of the Russian artist. I felt sorry for him. 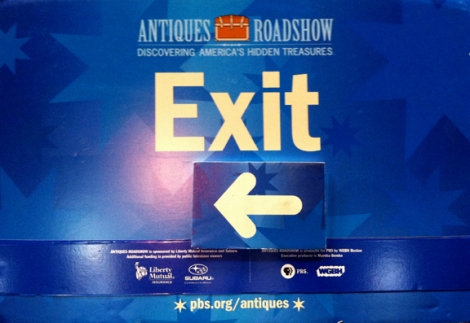 I had a great, albeit tiring, time at the “Antiques Roadshow.” I enjoyed watching the process; seeing the curious, as well as the ordinary items; and chatting with my fellow would-be treasure holders. Although my experience had ended five hours after it began, there were plenty of hopefuls awaiting appraisals of their items. Behind me I left perhaps another two hours worth of valuing the worth of Grandma Wilma’s washboard, Cousin Frank’s fountain pens and Aunt Rose’s Roseville pottery. Tune in for the broadcast of the “Antiques Roadshow” New York edition in 2015!