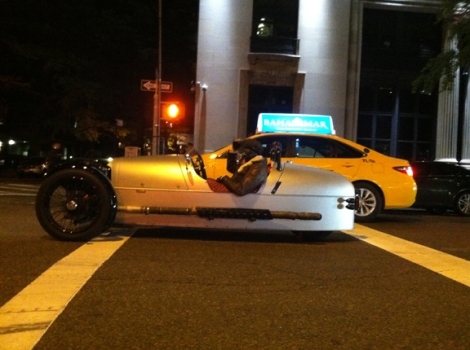 The Morgan seems to have its nose in front.

What about Sunday night racing, Mr. Earnhardt? It was only last night that we spotted this three-wheeled Morgan along the Gold Coast of Fifth Avenue, at the corner of East 12th Street in Greenwich Village. It was a thrilling and delightful surprise to discover this sporty vehicle waiting for the light to change.

As the taxi waited on the other side of the Morgan, it appeared as if they were about to race.

The taxi gets an early lead.

“I want to be up front racing.” —Dale Earnhardt

The Morgan appeared to have the edge at the starting line; but the photo progression shows that nothing beats a yellow taxi on the streets of New York!

The taxi pulls out ahead; it has a fare!

“The era of gentleman racing drivers is ended.”
—Enzo Ferrari

If gentlemanliness and dapperness are equal, than this driver qualifies as gentleman. He looks quite dapper wearing a scarf, to blow in the wind; a pair of goggles, to shield his eyes; a leather jacket, to protect against the wind; and a soft leather helmet, to keep his head warm. The entire scene looked like something from another era, or a movie about eccentric New Yorkers. What a fun way to end the day I must say.