“I built thereon a palace with halls of cedar, cypress, juniper, boxwood, teak, terebinth, and tamarisk as my royal dwelling and for the enduring leisure life of my lordship.”
—translation of the Standard Inscription, part of most of the reliefs in the palace of Ashurnasirpal II (Assyrian king, reigned from 883 B.C. to 859 B.C.)

Notice the hooves; this is the bull version of the lamassu.

Late last week the New York Times and others reported that ISIS has added destroyer of national patrimony to its long list of horrors. After they overran the villages of Assyrian Christians in northeast Syria, ISIS fighters went about using sledge hammers, power tools and their rifle butts to deface or totally destroy ancient Assyrian artifacts that are close to 3,000 years old. 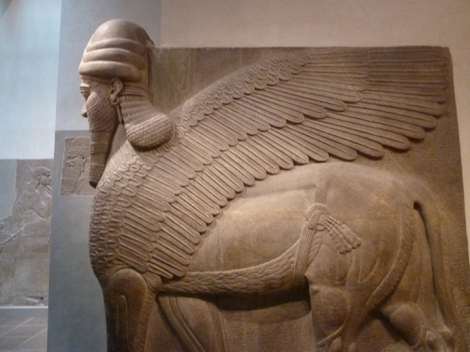 This is the lion lamassu.

If there is any doubt about the important role that museums play in modern society, after this incident those doubts should vanish. The reason why is that New York’s Metropolitan Museum of Art (MMA) has within its collection ancient Assyrian artifacts of the quality and time period that ISIS has destroyed. MMA is preserving and caring for works of art that give present-day art lovers, modern scholars, everyday school children and the casual observer a window into an ancient civilization. 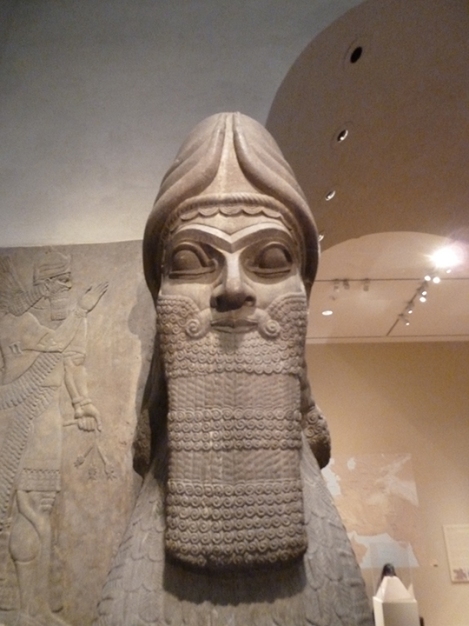 One of the other carved panels can been to the left.

MMA’s Sackler Gallery for Assyrian Art has been set up to give us the impression that we are standing in the main audience hall of Ashurnasirpal II, the ninth-century B.C. Assyrian king whose palace was at Kalhu in northern Mesopotamia.

The bull’s chest hair is seen up close.

The most impressive part of the exhibit is the 10-foot 3.5-inch tall winged, human-headed lion and bull, guarding the entrance to the gallery. In 880 B.C. these colossal gypsum alabaster figures guarded the entrance to the palace or maybe the king’s private chambers. They were a gift from John D. Rockefeller Jr. to MMA in 1932. The bas-reliefs that decorate the gallery’s walls come from different rooms in the palace. They show the king performing a ritual, accompanied by attendants and supernatural creatures. These artifacts were excavated during the late 1840s to the early 1850s during one of the Near East’s first archaeological digs.

The head of the bull lamassu.

“Beasts of the mountains and the seas, which I had fashioned out of white limestone and alabaster, I had set up in its gates. I made it [the palace] fittingly imposing.”
—a continuation of the Standard Inscription

The mother and stroller give a sense of scale for the sculptures.

The Assyrians called these beasts lamassu. Sometimes sculpted in relief, others times in the round, their mission was to protect the palace against demonic forces, and may have guarded the doorway to the king’s private apartments. The sculptures, dating from between 883 B.C. and 859 B.C. were uncovered by Austen Henry Layard (1817–1894), who worked in Assyria between 1845 and 1851. In art, lamassu were depicted as hybrids, either winged bulls or lions with the head of a man. Mr. Layard offered an explanation about these composite creatures. The lion or the bull represents strength; the wings stand for the swiftness of birds; and man’s head indicates intelligence. The horned helmet shows the creature’s divine nature; the belt (see the side view) signifies power. 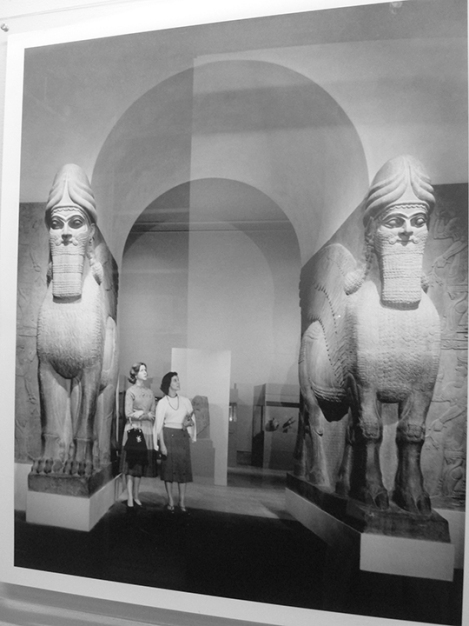 A vintage photo in MMA’s collection gives a sense of scale too.

The figures are carved showing five legs. When viewed from the front it stands firm; but when viewed from the side it appears to be moving forward, confronting evil. In addition to the Metropolitan Museum of Art’s examples, the British Museum in London, the Musée du Louvre in Paris, the Pergamon Museum in Berlin and the Oriental Institute in Chicago have versions of these fantastical creatures in their collections.

A vintage MMA photo shows the installation process for the lamassi and related pieces.

From the ninth to the seventh century B.C., the kings of Assyria ruled over an extensive empire that was centered in northern Iraq. The first great Assyrian king was Ashurnasirpal II; he launched a massive building program that transformed the provincial town of Kalhu into his capital city. (The Arabs renamed Kalhu, Nimrud.) The new capital covered 900 acres, surrounded by a mud-brick wall 120 feet thick, 42 feet high, and 5 miles long. On a hill at the southwest corner stood the temples, palaces, and administrative offices of the empire. In 879 B.C. Ashurnasirpal celebrated the completion of his new capital with a festival for 69,574 people. The event was documented this way, “the happy people of all the lands together with the people of Kalhu—for ten days I feasted, wined, bathed, and honored them and sent them back to their home in peace and joy.”