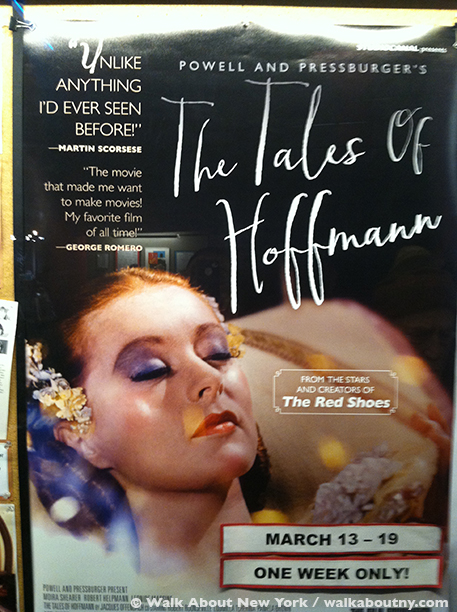 Ballet dancer Moira Shearer is featured in all promotional material.

I remember my high school French classes very well. For French III and IV the teacher was Mr. McMullin, a short, average-looking man with light brown hair, which he wore combed back. He was a Francophile like no other! In his classes, we were immersed in all things French, not just the language (and I thank him for it!). This included listening to Les Contes d’Hoffmann (The Tales of Hoffmann) in class; it was my junior year, making it French III. That experience, of more than 44 years ago, could never have prepared me for the stunning beauty of the restored cinematic version of The Tales of Hoffmann, now playing for a limited engagement at the Film Forum.

Originally released in 1951, Michael Powell (1905–1990) and Emeric Pressburger (1902–1988) wrote and directed this cinematic dazzler. Powell and Pressburger are the creative team behind The Red Shoes; they have employed some of the same players for this effort. The film is based on the 1881 opera by Jacques Offenbach (1819–1880), which had its first performance posthumously.

Moira Shearer is shown here as Olympia, the doll that Hoffmann falls in love with.

Gathered at Luther’s Tavern, Hoffmann tells three tales of his lost loves to his drinking and smoking pals. At the same time, he yearns for Stella, a prima ballerina, the present object of his affection. Unlike other principal roles, American tenor Robert Rounseville acted and sang the role of Hoffmann; all other singing was dubbed, using the voices of trained opera singers.

The voices are top-notch, with the French libretto translated into English. Mon dieu, Mr. McMullin would blanch! It is the vivid colors, textures, and highly stylized sets and costumes that intoxicated this viewer. Hein Heckroth’s art direction and set decoration were nominated for Academy Awards. This was long before digital technology became commonplace, yet Heckroth created visual miracles. Hoffmann’s first love is told of in his tale about Olympia. As a young man, Hoffmann falls in love with a cleverly crafted doll who dances like a dream. The ballet sequences, featuring Moira Shearer as Olympia, are outstanding. When the doll’s creators rip her to pieces, Heckroth’s inventiveness is on full display.

Director and film historian Martin Scorsese introduces the movie. He relates his own fascination with the movie from his youth, when he saw it in black and white on his home television with commercial interruptions. He was among several who oversaw the restoration of The Tales of Hoffmann. Together with Warner Brothers Motion Picture Imaging (MPI) and colorist Ray Grabowski they have brought this gorgeous film to a 21st audience. During the restoration process sequences from Act 3 were discovered; those and the epilogue have been restored with this print.