“You can see the light from down the street. It draws people inside and up the stairs, since the only way to understand it is through exploration.”
— Chris Cooper, co-designer of Starlight

Dynamic rather than static, Starlight activates the space it occupies.

In March the monthly meeting of the Guides Association of New York (GANYC) was held at the Museum of the City of New York. It was the perfect opportunity to visit the museum as well. Just as in 2014, when these photos were snapped, I was once again stunned by Starlight, a site-specific light sculpture that accentuates the museum’s majestic, curving, marble staircase at the heart of the historic interior.

As I climbed the stairs between the first and second floors, keeping my eye on Starlight as I went, an array of dynamic patterns emerged. The optical effects resulting from the geometry of a uniform spatial grid generate allowed me to see the entryway architecture in a new light. Pun intended!

With this sculptural installation, the Museum of the City of New York makes a bold declaration. It is not only a venue for historical exhibits, but also for exciting, contemporary displays. A subtler goal is aimed for as well. By drawing visitors up the stairs to look at the sculpture, environmental and health objectives are achieved. Less demand is placed on the museum’s elevators; and visitors gain the health benefits of climbing the stairs. 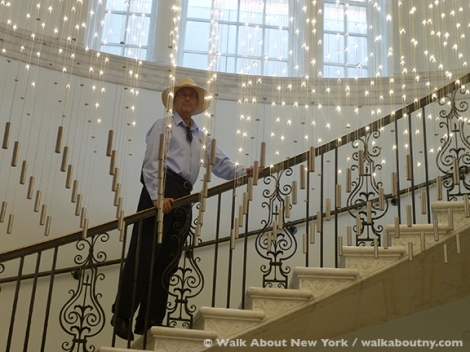 The geometry seems to change as a visitor—me!—climbs the stairs.

Officially titled Hanging Grid 2 (one wonders, where Hanging Grid 1 hangs?), the mesmerizing sculpture is the brainchild of Cooper Joseph Studio. Employing 10,566 points of light, Starlight is most striking component of a $90-million restoration and expansion project for the Museum of the City of New York’s 1932 Neo-Georgian landmark building. The overall project is the museum’s attempt at a comeback after a period of decline. Boldly designed graphic signage, an on-sight café and upgraded gallery spaces are also part of this effort, connecting the museum’s past, present and future. 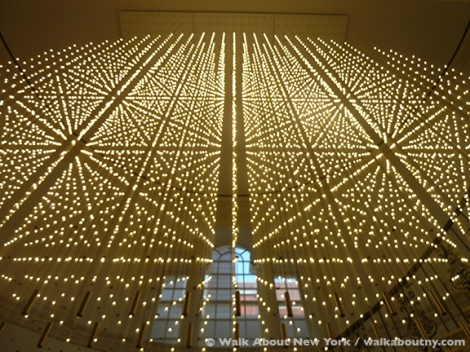 At first only the lower area of the circular volume can be seen.

The brilliant light and the ever-changing patterns make a walk up the staircase an experience. Visitors quickly understand that from the steps you can appreciate the full form of the sculpture. State-of-the art LED (Light Emitting Diode) lighting technology is at the sculpture’s core. It uses minimal energy, generating very little heat; and the lights will work for years without the need for replacement.

The full form emerges as a visitor ascends to the second floor.

When fabricating this simple concept it was imperative that every detail be executed precisely. The sculpture’s components were computer-generated; then were assembled by hand. The most exciting fact about the work’s creation is that local talent was used. The concept came from Cooper Joseph, a Manhattan-based design firm. Rush Designs, a Brooklyn-based group of young, industrial designers, assembled it. Each light diode, resembling a triangular-shaped guitar pick, is made from double-sided circuit boards; white LED chips are mounted on them. Non-lensed chips, known as ‘naked chips’ in the industry, allow for the most precise points of light. This creates an abstract simplicity. 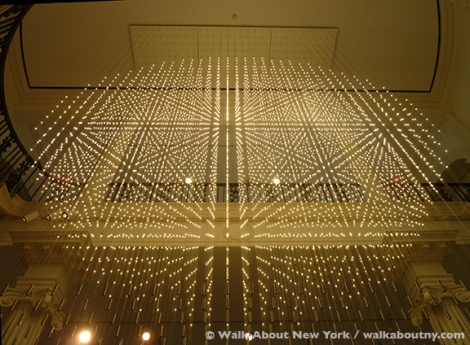 The lights form a veil over the classical architecture.

There had been a 19th-century, Colonial Revival chandelier suspended from the ceiling where the sculpture now hangs. The work is visible through the museum’s Fifth Avenue entrance, attracting passers-by inside. Starlight has the unique quality to immerse visitors in the design. The museum’s attendance figures are up significantly; it is strongly believed that Starlight has played an important role in the increase. Hanging Grid 2 is among the museum’s most photographed features.

The work of art needs little energy because of state of the art technology.

Measuring 22 feet 6 inches tall, 14 feet 9 inches wide, and 3 feet deep, Starlight is a mass of 219 suspended wires called “vines,” forming a rectangular box. There are more than 15,000 solder joints on three miles of wire. The crew from Rush Designs soldered the points one by one, with a precise vertical spacing of 5-3/4-inch between each chip along a single strand. 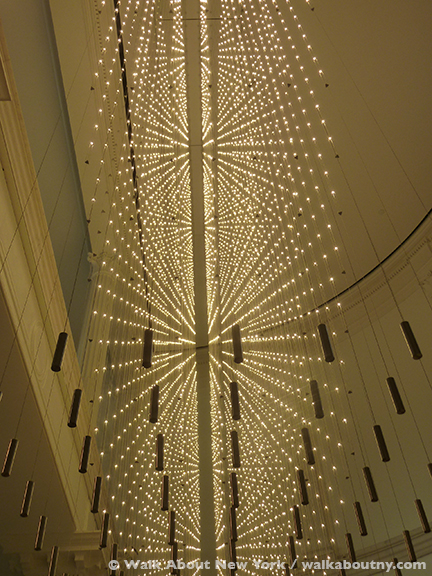