The entrance to the Jefferson Market Library.

Since the 18th century April 23rd, Saint George’s Day, has been celebrated as William Shakespeare’s birthday. Although his actual date of birth remains unknown, he was baptized on the 26th of April 1564; baptismal ceremonies were traditionally carried out three days after the birth of the child. The Bard of Stratford-on-Avon died on the April 23, 1616, creating a nice neat package of dates.

The windows above the doorway to the Jefferson Market Library.

In New York Shakespeare is amply represented in Central Park with an over-life-sized bronze by John Quincy Adams Ward; and each summer the Public Theater presents Shakespeare in the Park, a two-production season of free performances at the Delacorte Theater. Each spot is included on our Central Park Walking Tour. Although these are two of the better-known Shakespeare-related sights in the Big Apple, others can be found around the city, all hidden in plain sight.

The tympanum above the library’s entry door.

One such hidden-in-plain-sight example is at the Jefferson Market Library. Originally the Jefferson Market Courthouse, this wonderfully eclectic building is a prime example of Victorian Gothic architecture. Since 1876 it has been a recognizable fixture in Greenwich Village, standing on an oddly shaped block that is formed by Sixth Avenue, Ninth & Tenth Streets, and Greenwich Avenue.

The building’s design is the work of Fredrick Clarke Withers (1828–1901), who helped Calvert Vaux and Frederick Law Olmstead design Central Park after he immigrated to America from England in 1853. Mr. Withers was inspired by William Burgess’ design of the London Law Courts and also by Venetian architecture. Originally the elaborate design consisted of a tightly knit cluster of buildings, including a courthouse, plus a five-story jail and a market, both of which were demolished in 1927. The complex’s cost, not including architects’ fees, totaled under $360,000.The building, known as the Third Judicial District Courthouse, was the centerpiece of the project; and is all that remains of this civic complex.

Since 1967 the former courthouse has served as a branch of the New York Public Library, the Jefferson Market Library, a highlight on the Greenwich Village Walking Tour. The tympanum above the library’s entry shows a scene from The Merchant of Venice. If the building was a church, and some passers-by do mistake it as such, this space would depict a scene from the life of Jesus Christ. Because the building would serve as a courthouse, the architect chose what is perhaps the most famous courtroom scene in classical literature. 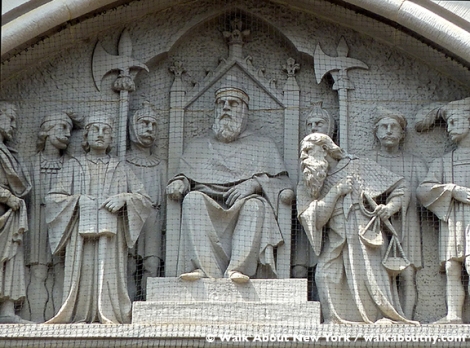 At the center of the scene, seated in the magisterial chair, is the Doge of Venice, doge meaning duke in the Venetian dialect. Presiding over the trial of Antonio, the eponymous merchant of Venice, the duke cannot help such a prominent citizen because the foundation of the duke’s state is respect for the rule of law.

To the right crouches Shylock. He is holding a balancing scale in one hand and a knife in the other. He wants what is due him, his payment; he wants his pound of flesh! Directly to the right of Shylock is Bassanio, a kinsman and dear friend to Antonio, being restrained while wearing a fine hat with a grand-looking feather. To woo his beloved Portia, a wealthy heiress, Bassanio has borrowed money from Shylock; Antonio offered himself as guarantor.

To the left Portia, disguised as a doctor of law named Balthazar, points to the contract that states Shylock is entitled to his pound of flesh because Antonio cannot repay the loan. Portia wins the day when she cautions Shylock that he cannot spill a drop of blood when he extracts his pound of flesh, nor take any more or any less than one pound. She advises, “if the scale do turn, but in the estimation of a hair, Thou diest and all thy goods are confiscate.” The large figure in the foreground is Antonio standing hatless to the left. Nerissa, Portia’s lady-in-waiting and confidante, disguised as Portia’s law clerk, hovers in the background.

Netting has been stretched over the tympanum. It is a preservation measure that is designed to keep pigeons and other birds from landing there, using it as a restroom and roosting spot.