“I am passionate about food; it is one of the most gratifying pleasures in life. To me, eating is like a ritual, an expression of one’s soul.”
—Jesus ‘Lolo’ Manso, owner of the Socarrat Restaurants 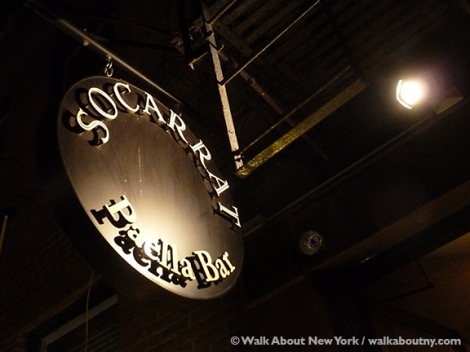 Señor Manso began the Socarrat Paella Bar in Chelsea in 2008. We have eaten at two of the three Socarrat locations. The original is in Chelsea. Another is in the Manhattan area called NoLita, or North of Little Italy, another concocted real estate designation.

Socarrat’s outside lamps mark which city neighborhood it is in. 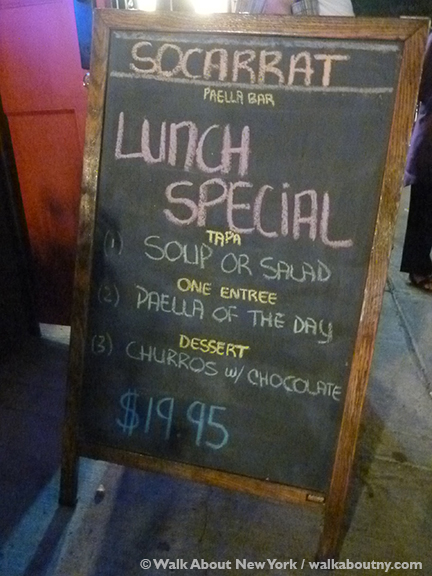 Prices at Socarrat are reasonable for the menu’s quality and quantity.

Start the meal off right: order a pitcher of sangria, which yields a fair amount of alcohol for two people; it is very good and packs a lasting kick! There are tapas choices. I like the roasted almonds and olives; I could make a meal of them alone! The fried artichokes are heavenly.

NoLita is shorthand for North of Little Italy.

The paella choices are wide, mainly meat or fish. There is a vegetarian option too. Each paella takes about half an hour to prepare. Each offers a generous portion for two people. Service and ambiance are good. The food is very good. With its three locations, quality service, comfortable surroundings and good food, Socarrat is a satisfying change from the usual restaurant choices. 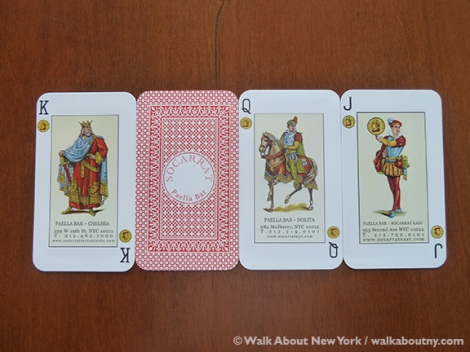 Socarrat’s business cards use humor to get attention.

The word ‘socarrat’ refers to the rice that gets crunchy and forms a crust at the bottom and the sides of the pan when cooking paella. Why does crusty rice deserve a name of its own, especially because it is waste that many people throw away?

As do all good restaurants, Socarrat displays its menu outside.

Genuine paella is cooked in a wide, shallow metal pan; allowing the rice to be spread thinly. With the rice touching the bottom is the prime condition for rice crust to form. Socorrat, from the Spanish verb socarrar, meaning to singe, is a vital part of paella. Think of it as the cherry on the top of the sundae, but in reverse. In order to get socorrat in paella, the heat must be turned up at the end of cooking. This engages the senses. The rice smells toasted, making a crackling sound, and it should offer some resistance when a spoon is poked into the bottom of the pan.