“People seem to be in some kind of hypnotic dream state. They seem to be programmed.”
—George Segal (1924–2000), his observations while he was researching Walk, Don’t Walk

This is the second article about works of art that stood out during an early July visit to The Whitney Museum of American Art at its new home in Manhattan’s Meatpacking District. The first article, Seamen in The Whitney was about a painting by Paul Cadmus in The Whitney’s collection. This article focuss on a piece of sculpture.

For 50 years George Segal, one of America’s leading Pop Art sculptor, has placed sculptural figures along with everyday objects within a context that many would recognize. He pioneered this style in the 1960s. Mr. Segal’s tableaux celebrate the common man. 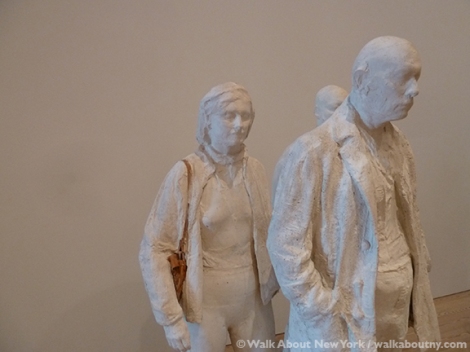 Mr. Segal began his artistic career as a painter. By 1958 he began to transform his painted figures into three-dimensional ones. Three years later he began to work with bandages that were designed to set bones. Working in sections, he would wrap these plaster-soaked medical bandages around his live models. When the plaster had dried he would remove the hollow, life-sized, white human form, piecing the sections together to create a whole figure. Using scavenged objects, he created scenes with the white figures. In 1970 he began filling the molds with plaster or bronze. For Walk, Don’t Walk the forms were filled with plaster because the piece was designed to be exhibited in a gallery. For work that will be shown out-of-doors or in a high-traffic area, bronze is used.

Mr. Segal has used this method to create sculptural scenes to address historical and political topics, such as the Holocaust, the Great Depression and the Kent State shootings. However, the larger body of his work is set amongst the mundane and pedestrian world around us. Pedestrians are the exact subject of Walk, Don’t Walk, dating from 1976. It is made up of three life-size figures—a white man and a white woman and a black man—standing on a New York street corner. To the viewer’s right is a crosswalk sign; it alternately flashes the its directions, “WALK” and “DON’T WALK.” 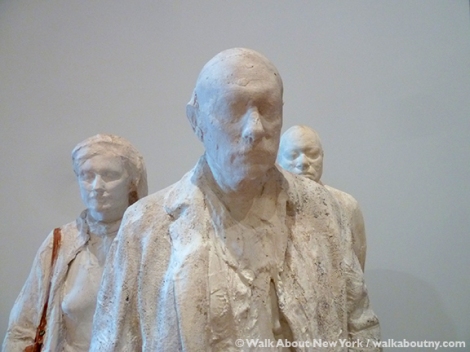 Including the sign reflects Mr. Segal’s fascination with them in the mid-1970s. This functioning example faces the audience, giving us a role in the artwork. For only a moment we are back outside in the role of pedestrian again, waiting our turn to cross the street, as we face the white figures in South Brunswick, NJ artist’s work.

Mr. Segal’s figures are dressed in everyday clothes; they are doing everyday things in everyday places. Their clothing, hair and shoes, even the buttons and wrinkles are where we would expect them to be. One detail that is unexpected: each one from head to toe is white. The figures were cast from real human beings; but the ghost-white figures have a decidedly non-human quality to them. This then fits Mr. Segal’s observation, quoted at the top of the article. The people he studied were in a trance-like state. 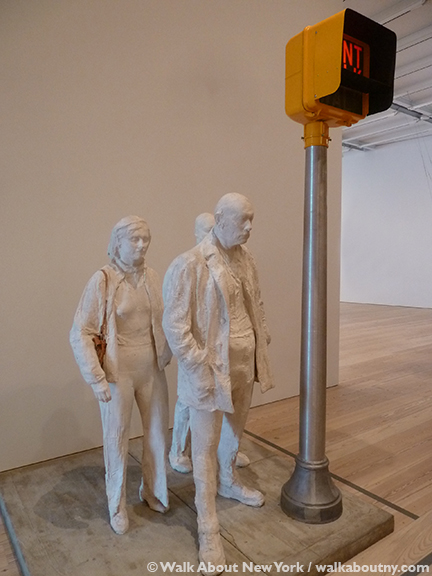 This leads to a major drawback for enjoying this and of all of Mr. Segal’s work. This flaw is that not one of the figures has a drop joy. All the faces are sullen; everyone looks sad and, not only alone but lonely. These qualities may have been heightened if The Whitney had displayed Walk, Don’t Walk as Mr. Segal had instructed: in a darkened gallery, dramatically spot-lit against a midnight-blue wall.

Learn of the controversy surrounding another of Mr. Segal’s art installations during our Gay Village Walking Tour.