“I make art to stay sane, to be centered and be able to reflect on myself, my psychological state. You know, it’s a psychological mapping of where I am, where I am trying to go. It’s a way of expressing and of growing.”
—Xenobia Bailey (1955– ) 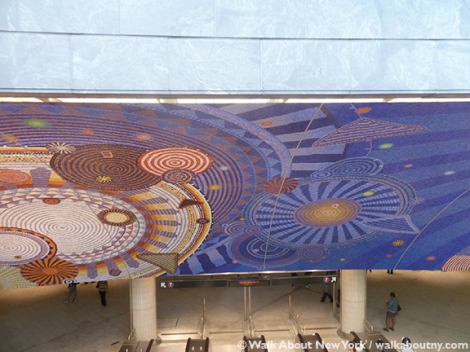 The far west side of Midtown Manhattan has a new subway station. The 34th Street/Hudson Yards extension of the #7 line opened on Sunday, September 13th to great fanfare. There are 496 stations in the city’s subway system. This latest addition is part of the major development above the Metropolitan Transportation Authority’s (MTA) Hudson Yards. Cold glass and metal form the buildings that will one day serve as places to work and live. Residents and workers will use this station to easily reach other parts of New York. 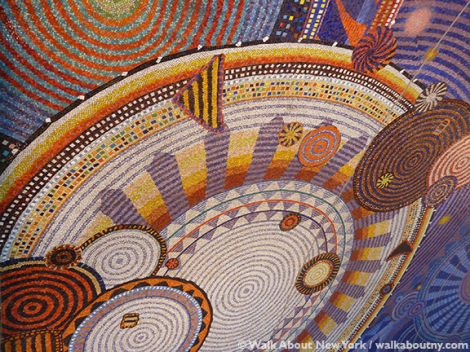 A bold and colorful work of art brings a human touch to this otherwise sterile place. Titled Funktional Vibrations, the artwork has two parts, both commissioned by MTA Arts & Design from Xenobia Bailey. Passengers are treated to the first part as they descend, either by escalator or stairs, into the station. Above their heads pulsating, concentric circles combine with a vibrant blue background in an asymmetrical design to greet them. 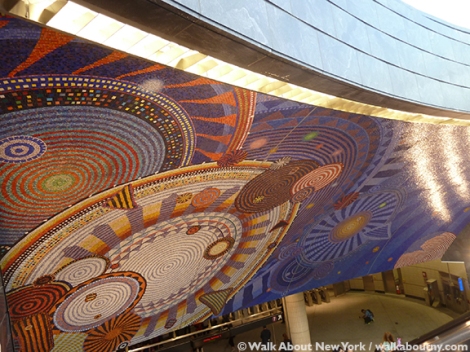 “Funktional Vibrations” above the stairs at the Hudson Yard stop.

At the base of this escalator bank is the information booth and ticketing machines. If passengers look to the ceiling, they will see part two of Funktional Vibrations. The title is not a misspelling. One of Ms. Bailey’s influences over the years has been the music genre, funk. Developed in the mid- to late 1960s, funk is a combination of soul, jazz, and rhythm and blues musical styles.

Unlike the art at most other subway stations, which relates to the neighborhood above the station, in either its present day or past functions, Ms. Bailey’s design has nothing to do with the area’s former industrial history and nearby waterfront location, or with its transformation into an office/residential complex.

Fabricated and installed by Miotto Mosaic Art Studio, which has been responsible for many of New York’s subway art installations, this intricate mosaic mural has the effect of bringing blue sky to the underground world of commuters. As traditional as the African-American inspired patterns are, they feel futuristic, even timeless.

The dome section of “Funktional Vibrations” at the Hudson Yards stop.

Through her study of ethnomusicology at the University of Washington, Xenobia Bailey developed an interest in fabric craftsmanship. She has been influenced by African, Chinese, Native American and Eastern philosophies, and learned to crochet from Bernadette Sonona, a needle artist. 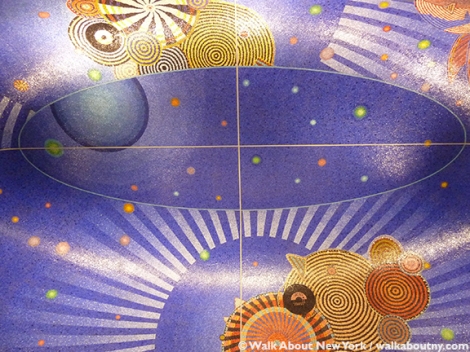 After earning a BA in industrial design, she began to create and sell colorful crocheted hats; these were inspired by African-American patterns, themes and hairstyles. Colorful concentric circles and repeating patterns characterize Ms. Bailey’s crocheted hats and large-scale crocheted mandalas, for which she is mostly known. Her hats have been used in advertisements for United Colors of Beneton; on The Cosby Show; and in Spike Lee’s film Do the Right Thing, where Samuel L. Jackson’s character, DJ Mister Señor Love Daddy sported hats designed by Ms. Bailey.

Although our Subway Art Tour does not include 34th Street/Hudson Yards, the stations it does visit highlight well-established artwork by world-class artists that we will be happy to show you when you book your Subway Art Tour! Currently in development Subway Art Tour Two will travel to completely different subway stations, exploring different fabulous art at the core of the Big Apple!