“I now make it my earnest prayer that God would have you, and the State over which you preside, in his holy protection; that he would incline the hearts of the citizens to cultivate a spirit of subordination and obedience to government, to entertain a brotherly affection and love for one another, for their fellow-citizens of the United States at large, and particularly for brethren who have served in the field; and finally that he would most graciously be pleased to dispose us all to do justice, to love mercy, and to demean ourselves with that charity, humility, and pacific temper of mind, which were the characteristics of the Divine Author of our blessed religion, and without an humble imitation of whose example in these things, we can never hope to be a happy nation.”
—Washington’s “Earnest Prayer” was written by him at Newburgh, New York, at the close of the Revolutionary War, and appeared in the Circular Letter Addressed to the Governors of all the States on the Disbanding of the Army, June 14, 1783

Today, November 11th is Veterans Day. The celebration began as a way to mark the end of the Great War, World War I, promoted as the War to End All War. Approved May 13, 1938, 52 Stat. 351; 5 U. S. Code, Sec. 87a made every year’s November 11th a legal holiday; it was known as Armistice Day. It was meant to be a day that would be dedicated to the cause of peace, and celebrations to that goal.

Sculptor James Kelly was known for his exacting detail.

Following World War II and the Koran War veterans service organizations urged that the law be amended, striking out the word ‘Armistice’ and replacing it with the word ‘Veterans.’ Public Law 380 was approved, and on June 1, 1954, November 11th became a day to honor American veterans of all wars.

The horse is a particular favorite of mine.

George Washington was a veteran. We do not think of him in that role; but he was. After the general resigned his commission as commander-in-chief of the Continental Army on December 23rd 1783, he retired to his home at Mount Vernon, Virginia. He remained at his beloved Potomac River-side plantation until he was sworn-in as the country’s first president, on the balcony of New York’s Federal Hall on Wall Street, April 30th 1789 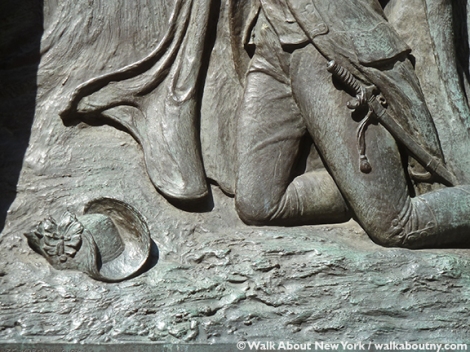 It appears a French cocarde, a bow or knot of ribbons on a hat, is attached to the general’s.

The bronze relief panel, General George Washington in Prayer at Valley Forge occupies a small space at the right-hand side of the front of Federal Hall. Sculpted by New York City native, James Edward Kelly (1855–1933) in 1904, it is possible to overlook the plaque. It is believed Washington often prayed for God’s guidance for himself, and his troops. He serves as an example for all veterans to perform their duty to the country honorably.

The dark bronze stands out from the light marble.

George Washington is the highest-ranking U.S. military officer in our nation’s history. During the Revolutionary War Washington held the rank of major general. After his presidency he was given an honorary promotion to lieutenant general, adding one star to the three he had had. As U.S. military history advanced the four- and five-star generals who followed would officially outranked him.

The bronze tablet is located at street level on the right front of Federal Hall.

To correct that during the United States’ Bicentennial in 1976, President Gerald Ford signed a resolution that posthumously promoted George Washington to the highest military rank possible, General of the Armies. John Joseph ‘Black Jack’ Pershing was also given this title following his service in World War I.

Facing south as it does, the plaque is well lit by the sun.

To further elevate Washington, the resolution that Ford signed also states “no officer of the United States Army should outrank Lieutenant General George Washington.” To put it simply, however many stars other generals are awarded, Washington will always have one more. As of this Veterans Day, he has six.

Take our Greenwich Village Walking Tour and our one-of-a-kind Five Squares and a Circle Tour to discover New York City’s grandest tribute of all to America’s first president and its highest ranking military officer and veteran, the Washington Arch.

One response to “George Washington: the Ultimate Veteran”