“We aren’t here today to bow before the representation of a fierce warlike god, filled with wrath and vengeance, but we joyously contemplate instead our own deity keeping watch and ward before the open gates of America and greater than all that have been celebrated in ancient song. Instead of grasping in her hand thunderbolts of terror and of death, she holds aloft the light which illumines the way to man’s enfranchisement. We will not forget that Liberty has here made her home, nor shall her chosen altar be neglected. Willing votaries will constantly keep alive its fires and these shall gleam upon the shores of our sister Republic thence, and joined with answering rays a stream of light shall pierce the darkness of ignorance and man’s oppression, until Liberty enlightens the world.”
—from the dedication speech for the Statue of Liberty delivered by President Grover Cleveland, October 28, 1886 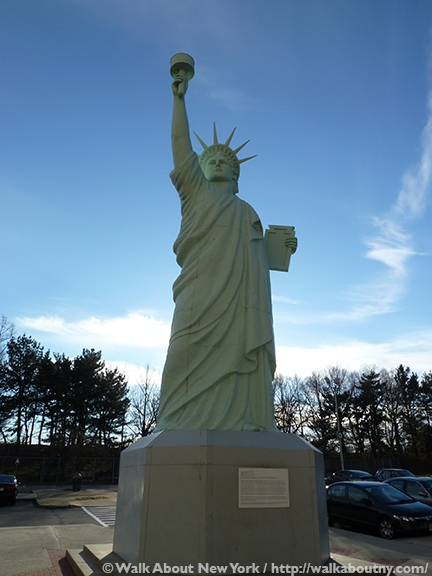 Today marks the 130th anniversary of the dedication of the Statue of Liberty. Formally titled Liberty Enlightening the World, the Lady in the Harbor was a gift to the United States from the people of France. Although for most of the 20th century the statue has been associated with immigration that was not France’s intent. Instead the deed-of-gift instructs that Miss Liberty be placed facing the hills of Brooklyn. It was there that the French believed the first fight for freedom in the modern era took place. It was the Battle of Brooklyn that took place on August 27, 1776; it was the first major confrontation between the rebellious colonists and the British Army. General Washington’s Continental Army lost that battle, however it would go on to win the War for Independence!

It is not the original statue in New York Harbor, but a replica of Miss Liberty highlighted here. It overlooks the car park at the 1893 building designed by McKim, Mead and White for the Brooklyn Museum of Art. It is the largest copy in the world of the well-known copper statue. Its creation is connected to an even older and dearer American ideal than liberty, that of commercial enterprise.

In 1902 Russian immigrant William H. Flattau commissioned the replica to serve as a symbol for his business, the Liberty Storage Warehouse Building, located at West 64th Street and Broadway. Mr. Flattau hired a design team to reproduce as faithfully as possible the original. It was achieved through 35 iron and steel plates, each 1/4-inch thick, which were assembled atop the warehouse. 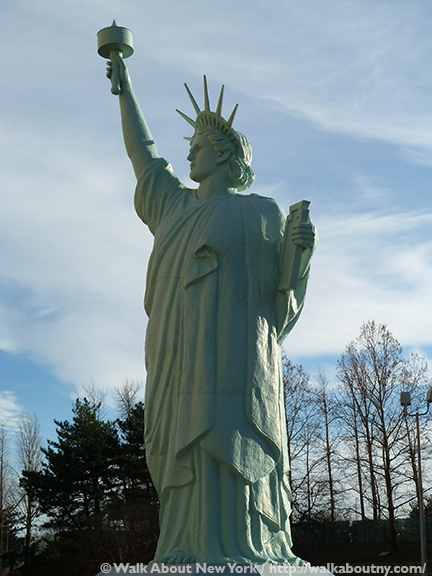 Installed in 1902, the replica was one of the highest points in the neighborhood. For the next 10 years visitors were allowed to climb a spiral staircase inside and take a look at Columbus Circle through the statue’s crown. Admittedly it was not as impressive as the view visitors to the real statue get of New York Harbor; but more picturesque than the view of the back of the Brooklyn Museum. The view from the replica was blocked by an apartment building constructed in 1912. Mr. Flattau replaced the torch with a real torch whose light could be seen from a distance of 1.25 miles.

Because it was originally designed to be seen from the street level, this smaller version of the Frédéric-Auguste Bartholdi original, has a thicker midsection, slightly more stolid curves, and is more squat. Also a less sophisticated casting process was used. The Brooklyn Museum replica measures only 47 feet high, as opposed to 305 feet and 1-inch tall for the original in New York Harbor. The statue stood on the warehouse for a century. A developer, wanting to turn the building into co-op apartments, donated it to the museum in 2002.

When you are part of our Gay Graves Tour you will have the opportunity wave to the Statue of Liberty from Battle Hill in Green-Wood Cemetery, a National Historic Landmark in Brooklyn. During our Five Squares and a Circle Tour you can see the bronze sculpture, with a connection to the American War for Independence, that made the reputation of Frédéric-Auguste Bartholdi, Miss Liberty’s French creator. Take the Tour; Know More!