November 11th is celebrated in the United States as Veterans Day. This was not always so. Since 1919 this date has been known as Armistice Day around the world. It was established to commemorate the armistice signed between World War I allies and Germany, marking the end of hostilities. The agreement took effect at the eleventh hour of the eleventh day of the eleventh month of 1918. In New York City neighborhoods the citizens honored their local doughboys who lost their lives in the Great War with memorials.

Three doughboys are easily seen in profile of the Washington Heights-Inwood War Memorial.

At the northern end of Mitchel Square, where Broadway and St. Nicholas Avenue meet West 168 Street, stands an impressive monument, the work of socialite, sculptress and art patroness Gertrude Vanderbilt Whitney (1875–1942). The sculpture is composed of three, over life-size, bronze figures. Two soldiers, one kneeling and one standing, support a third comrade. The monument honors the men from the adjacent, northern Manhattan communities of Washington Heights and Inwood who died in the First World War.

The Washington Heights-Inwood War Memorial’s detail of the doughboys’ boots.

Born in New York City on January 9, 1875 Gertrude Vanderbilt Whitney was a daughter of the president of the Central Railroad, Cornelius Vanderbilt II and his wife Alice Claypool Gwynne. New York City’s Art Students League is among the art schools where Mrs. Whitney studied. Among other war relief efforts, she established a hospital for wounded soldiers in Juilly, a Parisian suburb. Based upon what she experienced during this time she modeled a series of 24 small bronzes depicting soldiers in battle. These bronzes were exhibited in 1919 at her studio on West Eighth Street in Greenwich Village. The show was titled, “Impressions of the War.” 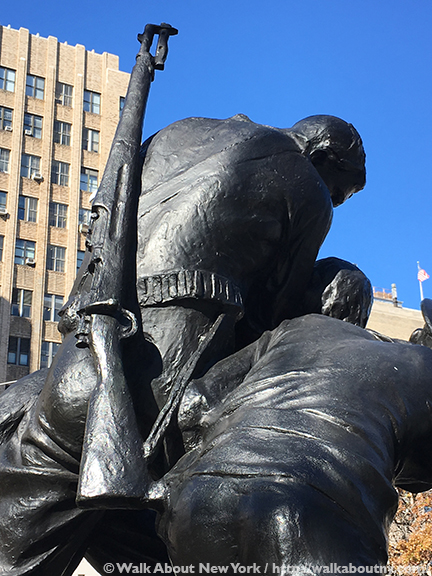 The Washington Heights-Inwood War Memorial’s bayonet is a restoration.

Commissioned by the Washington Heights and Inwood Memorial Association this memorial is one of several that Mrs. Whitney contributed to that serve as World War I monuments in the United States and France. The architectural firm of Delano and Aldrich designed the stepped, circular gray granite pedestal, on which are set 20 bronze plaques. They list the names of 357 local doughboys who lost their lives in what came to be called “the War to End All War.” The downward pointing torches symbolize a life ended but not extinguished because the light of the soul lives on. 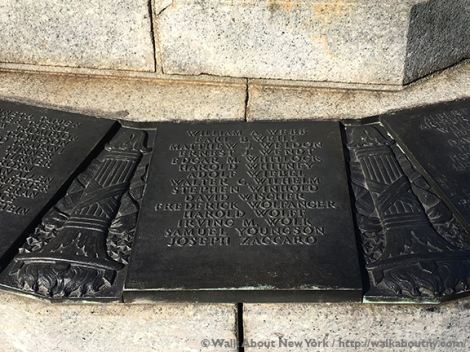 Memorial Day 1922, May 30th, was chosen for the monument’s dedication. Military parades were held throughout New York. Mrs. Whitney participated in the festivities, witnessed by several thousand spectators along the streets. She won an award from the New York Society of Architects for her contribution to this memorial.

The comradeship shown in Washington Heights-Inwood War Memorial is touching.

The park where the memorial stands is named for John Purroy Mitchel (1879–1918), mayor of New York City from 1914 to 1918; he was the youngest mayor in the city’s history. While preparing for combat Mr. Mitchel was killed on July 6, 1918 during an Air Service flight training accident in Lake Charles, Louisiana.

The Washington Heights-Inwood War Memorial faces the neighborhoods it honors. 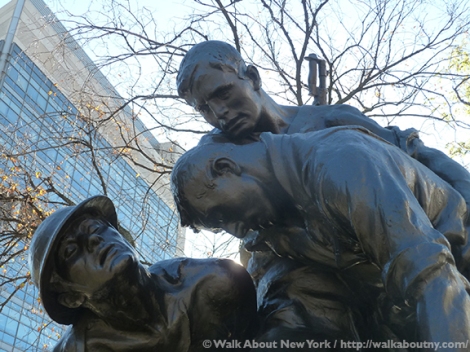 Expressions of pain on the faces of the Washington Heights-Inwood War Memorial.

During our guided walking tour of Greenwich Village discover the neighborhood where Gertrude Vanderbilt Whitney created her artworks, and where she founded the Whitney Museum of American Art. Take the Tour; Know More!