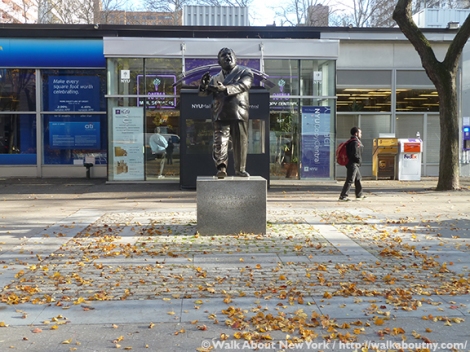 The figure stands in a small plaza on La Guardia Place.

Today we celebrate the birth of Fiorello Enrico La Guardia. The son of a United States Army bandleader, he was born on December 11, at 177 Sullivan Street, in Greenwich Village. He became known as the Little Flower, the meaning of his first name in Italian. 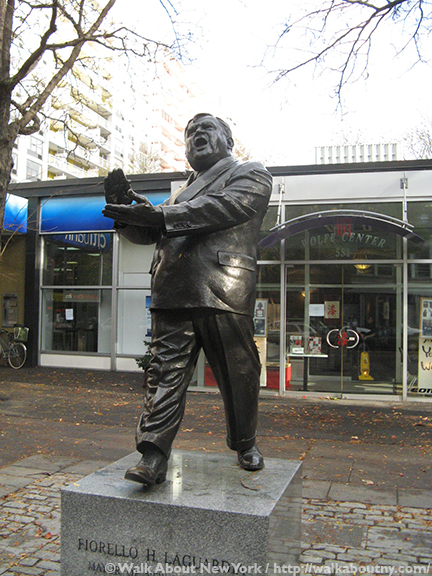 This area of Greenwich Village is quite different from when La Guardia lived here.

La Guardia was a Republican; that was unusual for a politician in a city such as New York, where politics was dominated by the Democratic machine, Tammany Hall. He served three terms as mayor, from 1934 from to 1945. La Guardia also served in the United States House of Representatives as the congressman from what was at the time called Italian East Harlem, now Spanish Harlem.

After earning a law degree from New York University, located in his home neighborhood, La Guardia was admitted to the New York State Bar in 1910, and became the nation’s first Italian-American Congressman in 1916. He held various Congressional posts until 1932, and served as president of New York City’s Board of Aldermen, the forerunner to the New York City Council, from 1920 to 1921. 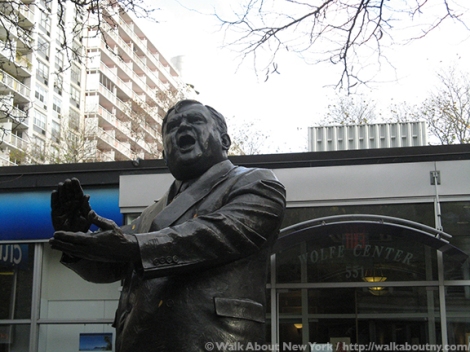 This area of Greenwich Village is quite different from when La Guardia lived here.

The scandals that had driven Mayor James J. Walker (1881–1946) from office put New Yorkers in a housecleaning frame of mind. Promising city reform, La Guardia was elected mayor in November 1933, and he was inaugurated on New Year’s Day 1934. During his 12-year mayoralty, La Guardia unified the public transit system, consolidated and centralized much of City government, cracked down on illegal gambling, and improved and added to the City’s infrastructure. After appointing Robert Moses (1888–1981) the first commissioner of a unified Parks Department in 1934, the City began an unprecedented expansion of the parks system throughout the five boroughs during the 1930s and early 1940s. Gracie Mansion, the late 18th-century home of Archibald Gracie, a prosperous New York merchant, became the official residence of the mayors of the City of New York during his third term, 1942 to 1945. 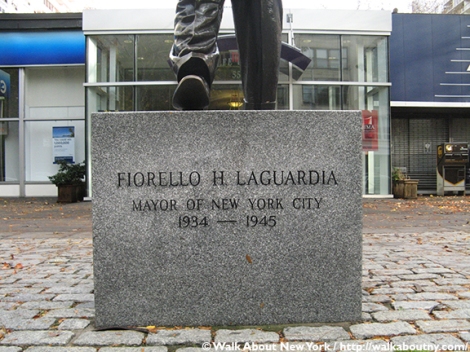 As he guided the city through the Great Depression, the mayor pointed to the lions outside the New York Public Library at Fifth Avenue and West 42nd Street, calling them Patience and Fortitude, the qualities he said that New Yorkers needed to make it through the tough times. In 1939 when New York’s newspapers were not publishing because of a strike, he delighted New Yorkers by reading the comics over the radio. La Guardia served as Director of the U.S. Office of Civilian Defense from 1941 to 1942. His appointment as Director General of the United Nations Relief and Rehabilitation Administration in 1945 fit perfectly with his passionate focus on causes of social justice. He died at his home in the Bronx of pancreatic cancer on September 20, 1947. 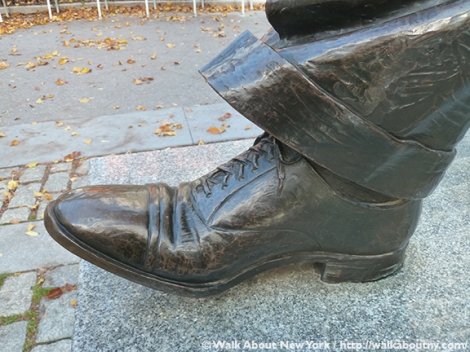 The figure shows good detailing, down to its shoes.

In the early 1990s, the Friends of La Guardia Place began renovating the public plazas along the street’s east side. In addition to improved landscaping, the organization commissioned a sculpture of La Guardia. It was a fitting location because this had been the neighborhood where he was raised. Unveiled in 1994, this dynamic, full-length, larger-than-life figure shows Mayor La Guardia clapping in mid-stride, with his mouth wide open as if in a cheer. 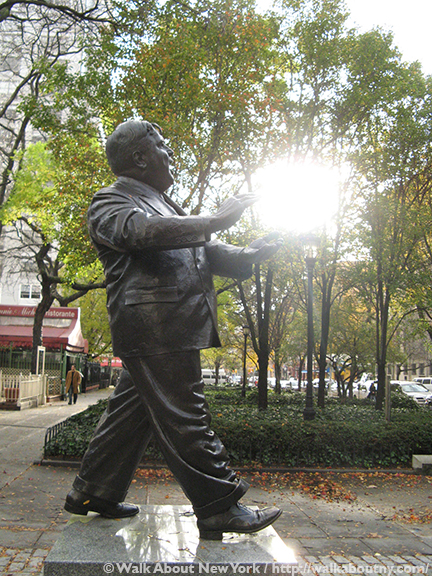 Brooklyn-based sculptor Neil Estern (1926– ), a former president of the National Sculpture Society, designed the figure. His other credits include the bust of John F. Kennedy in Brooklyn’s Grand Army Plaza, and the sculpture of Franklin Delano Roosevelt and his dog Fala, and Eleanor Roosevelt at the FDR Memorial in Washington, D.C. 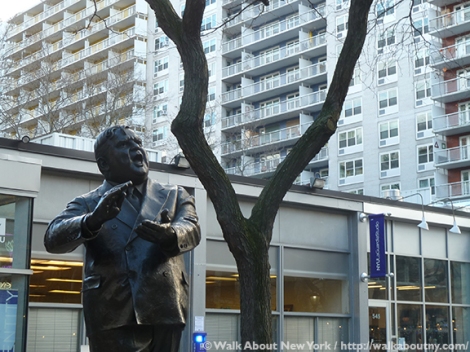 Our guided walking tours help you discover the history and art of the Big Apple. Take the Tour; Know More!