“Artists are the only people in the world who really live. The others have to hope for heaven.”
—John French Sloan (1871–1951, American Painter)

The Fifth Avenue-facing side of the Washington Arch.

And live they did! It was cold and lightly snowing on the night of January 23, 1917 when a group of Greenwich Village bohemians took a bold stand. The group included painters John French Sloan and Marcel Duchamp, poet Gertrude Drick, and Alan Russell Mann, Betty Turner and Charles Ellis, actors from the Provincetown Playhouse on nearby MacDougall Street. They made their way through a small, unlocked door set into the western pier of the Standford White-designed arch in Washington Square; they climbed the 110 steps of the spiral staircase to the arch’s attic level. These six, who would come to be called the Arch Conspirators, spread out blankets, hung Chinese lanterns, attached red balloons to the parapet of the arch, sipped tea, shot off cap pistols, and chatted until the sun came up.

At some point the mastermind of this escapade, Gertrude Drick, read a proclamation by candlelight into the cold air in the wee hours. It was a declaration of independence for what the Arch Conspirators called the “Free and Independent Republic of Greenwich.” The document is thought to have been designed and written by Mr. Duchamp; to add gravitas to their spoof, the proclamation is liberally peppered with the word ‘whereas,’ to imitate legal documents. 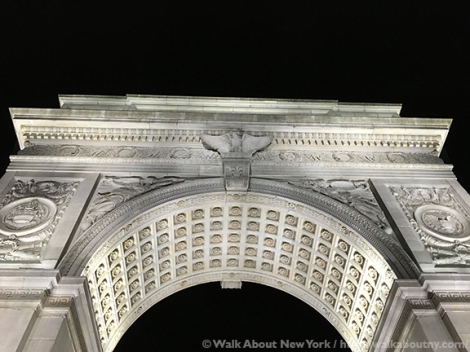 Looking to the attic portion of the Washington Arch.

Recorded for posterity by John French Sloan in a print entitled “Arch Conspirators,” depicting the friends socializing by candlelight high above Fifth Avenue, Gertrude Drick first thought of her plan when she noticed that door in the western pier of the 1895 Washington Arch. The best help to realizing the plan came in the person of the lax policeman patrolling the area. Miss Drick had observed that his habit was to neglect his post for hours, leaving the door unguarded. 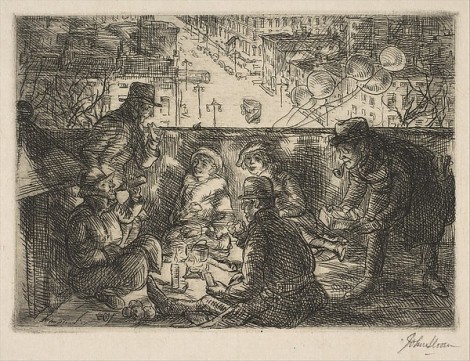 The 1917 etching by John French Sloan of the Arch Conspirators.

Given to the museum by Mrs. Harry Payne Whitney in 1926 the etching by John French Sloan is a part of the Metropolitan Museum of Art’s print collection. The artwork is not on display at this time.

Miss Drick had moved to Greenwich Village from Texas; she fancied herself an artist, and studied under John French Sloan, a member of the so-called Ashcan style. She brought attention to herself in the Village when she began calling herself ‘Woe.’ When asked her name, this affectation allowed her to respond, ‘Woe is me.’ She also earned a reputation as a prankster. She first approached her teacher Mr. Sloan with a plan to take back Washington Square, the heart of Greenwich Village, for the unconventional bohemian spirit. She and others saw local, national and world events and attitudes encroaching on their creative and free-spirited way of life; they sought to stop it. Therefore, late on the night of January 23, 1917, Miss Drick and her friends gathered on lower Fifth Avenue.

The Proclamation of the Independent Republic of Greenwich.

In the clear light of January 24th, all that remained of their late-night mischief were several red balloons. Within a day almost everyone in the Village knew they now lived in a liberated ‘country’ thanks to the Arch Conspirators. The old-moneyed class living on Washington Square North since the 1820s saw their actions as nothing but “bohemian tomfoolery.” They were not amused. 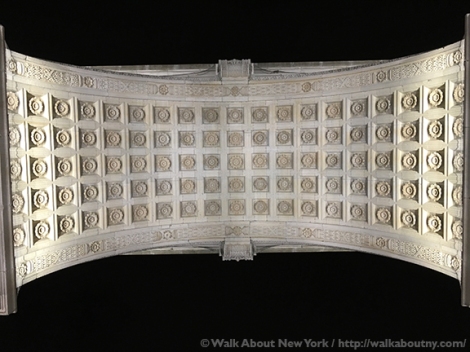 The coffered arch of the Washington Arch.

Although the group’s 1917 Declaration of Independence was laughed-off by most, the Greenwich Village spirit of rebellion, and breaking new ground was alive and well. It is not an overstatement to say that modern American art was born in and around Washington Square in the decades following the Arch Conspirators’ prank. John French Sloan and William Glackens led the realist style, followed by Thomas Hart Benton and Edward Hopper, who lived and worked on Washington Square. Jackson Pollock and other abstract expressionists took up Mr. Duchamp’s disregard for artistic convention. Gertrude Vanderbilt Whitney established the Whitney Museum of American Art in her studio only one block from the arch; her encouragement and patronage nurtured a generation of artists.

That door through which the Arch Conspirators slipped.

Through the 1950s and 1960s Washington Square continued to attract a creative generation of artists, writers, and performers; Bob Dylan, Joan Baez, Charlie Parker, and Allen Ginsberg each performed in and around the Washington Square. Today the access door that the Arch Conspirators used is always padlocked; the spiral staircase is secured, and the arch’s roof is off limits. Still 100 years after Mr. Sloan, Miss Drick, Mr. Duchamp and the others made their proclamation, rebellion and artistic expression are the order of things, and shine brightly in the Independent Republic of Greenwich. 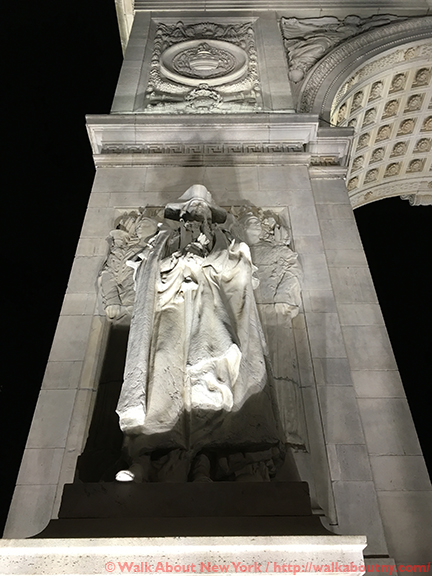 “Washington at War” by Hermon A. MacNeil placed at the arch in 1916.

Discover the Village and its art and history with our Greenwich Village Walking Tour and our Five Squares and a Circle Tour; each begins at the Washington Arch. Take the Tour; Know More! 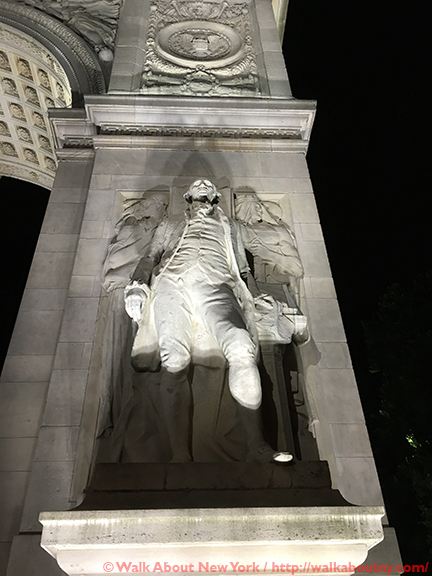 “Washington at Peace” by A. Stirling Calder placed at the arch in 1918.

Read more about the Washington Arch with our other articles.
A Birthday Tribute to George Washington
A Long Shadow
An Older Christmas Tree Tradition

ALL PHOTOS AND TEXT, EXCEPT CREDITED QUOTES AND ARTWORK, © THE AUTHOR 2017