You may boast of your brandy
And wine as you please,
Gin, cider and the rest,
Cold water transcends them
In all degrees.
It is good—it is better—’tis best.
—a rhyme, circulated by the National Temperance Society, encouraging citizens to drink water rather than alcohol 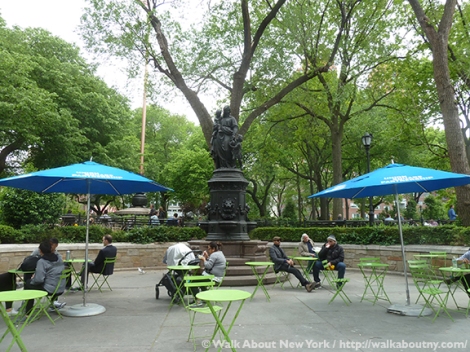 An alcove on the west side of Union Square holds a reminder of the late 19th century, when well-meaning forces across the United States were focusing attention on the problem of “demon rum.” What is now seen as an ornamental fountain, one of the oldest in a city park, was an effort to offer water as an alternative to alcohol.

The Women’s Christian Temperance Union, founded in 1874, was supported by women fighting the abuse of alcohol by the family breadwinner. After he had drunk his week’s wages, he came home angry and violent. At the same time some women were fighting for the right to vote. In some cases the two causes came together. Suffragettes Elizabeth Cady Stanton and Susan B. Anthony founded the New York State Women’s Temperance Society in 1852.

The face of Charity is a loving one.

The model for Charity was Frau Donndorf, the sculptor’s wife.

The fountain was the idea of its donor, Daniel Willis James (1832–1907), who interested the businessman and philanthropist Theodore Roosevelt, Sr. (1831–1878), father of the future president, in his plan. They brought in Professor J. Leonard Corning (1865–1923) as the architect, and to help find an appropriate sculptor. The project’s goal, according to Professor Corning, who spoke at the dedication, was “the threefold intent of contributing to the physical comfort of the people, and at the same time teaching a lesson of religion and cultivating a healthy appreciation of art.”

The sculptor’s name and city appear on the base.

Mr. James, born in Liverpool, England, was the grandson of Anson Greene Phelps (1751–1853) founder of Phelps, Dodge, and Company. Mr. James immigrated to the United States, amassing a fortune by directing his grandfather’s company and by securing seats on the boards of major American firms such as the Ansonia Clock Company, the Northern Pacific Railway and several mining companies out West. He and his cousin, William E. Dodge, Jr. (1832–1903), transformed their small family business into one of the world’s largest mining corporations. At the same time Mr. Dodge became the president of the National Temperance Society; his strict anti-alcohol beliefs impressed his cousin so much that he was moved to help the cause with this drinking water fountain. 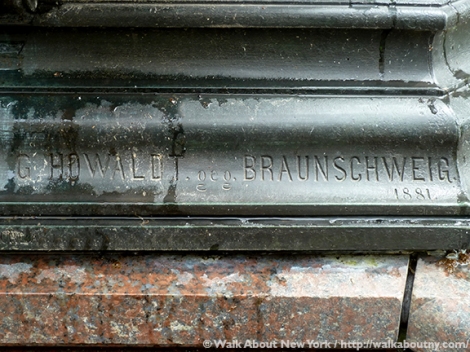 The foundry’s name, city and year are shown on the base.

In 1877 German sculptor Karl Adolph Donndorf (1835–1916), the newly installed head of the sculpture department in the Art Academy of Stuttgart, Germany, was settled on to execute the project. Herr Donndorf had sculpted the statuary on the Luther Reformation Monument in Worms, Germany, and monuments to Johann Sebastian Bach and Johann Wolfgang von Goethe in Carlsbad, Germany.

For the Union Square fountain Herr Donndorf designed a figural grouping. The woman is the over life-size, allegorical figure, Charity with two children. In addition to carrying an infant, she holds a pitcher, from which she is pouring water aided by a small child at her side. Allegorical images of Charity are typically connected with buildings for charitable purposes or churches, sometimes with Faith and Hope, making up the Three Virtues. Charity is usually a matronly figure, often with a head covering, and robed, giving her the look of the Blessed Virgin Mary. She may have her hand clasped to her breast, or have one or both breasts exposed, about to nurse an infant. Two or more infants or small children often accompany her. She is likely to be holding one of the infants. A less common pose shows Charity with her arm around the shoulder of an adult. If she has a free hand she may be offering food or a coin.

The figures were modeled on members of the sculptor’s family. On the four sides of the octagonal base are waterspouts in the shape of bronze lion heads. Additional sculptural flourishes such as frolicking butterflies and dragonflies, salamanders, floral swags and birds flitting among acanthus leaves decorate the bronze base. Originally metal cups hung from chains; passersby could use these to quench their thirst. The stepped pedestal supporting the artwork is carved from polished red granite that was quarried in Sweden. 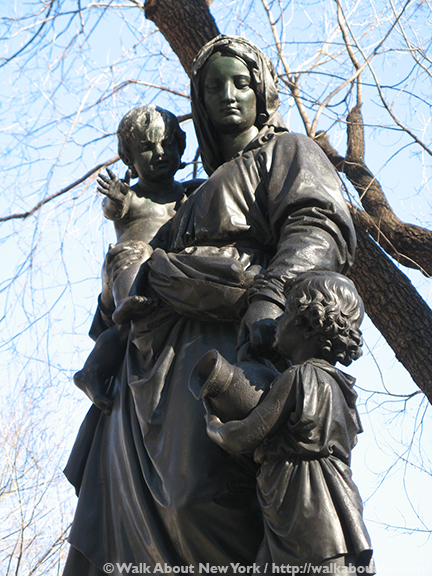 The James Fountain could use a good cleaning.

Because the sculptor took so many months “to execute a work which for truth to nature and conscientious attention to detail, should be as fit for a museum as for a public park” a new model for the infant had to be found; the original baby was no longer a baby! The project suffered a major setback when the nearly completed, full-sized clay model was destroyed because of a severe frost in the winter of 1879–80. Herr Donndorf recreated his original; finally the work was cast at the G. Howaldt Foundry in Brunswick, Germany.

On all four sides butterflies and a dragonfly frolic above the lions’ heads.

On October 25, 1881 what has come to be called the James Fountain was dedicated in Union Square. The ceremony was elaborate, and included speeches by Professor Corning, the donor Mr. James, Parks Commissioner Smith E. Lane and Mayor William R. Grace. The words of their various speeches repeatedly included references to bounty, kindness, love and beneficence, all qualities that the project was meant to encourage in the public’s behavior.

Birds flit among the acanthus leaves on each of the four sides.

Approximately one thousand people gathered in Union Square on the day of the unveiling. Afterwards, lines formed to take a drink of the refreshing waters from the fountain, which measures 19′ tall, 7’6″ wide, and 12′ deep. Other temperance fountains were erected across New York City; but only the James Fountain and the much plainer Cogswell Fountain, located in the East Village’s Tompkins Square, remain as reminders of a time when temperance crusaders, blaming drunkenness for marital strife, financial woes, sickness, immorality and other social ills, sought to make liquor illegal. They were at odds with saloonkeepers and drinkers, who felt that drinking was a private matter and should not be legally curtailed. 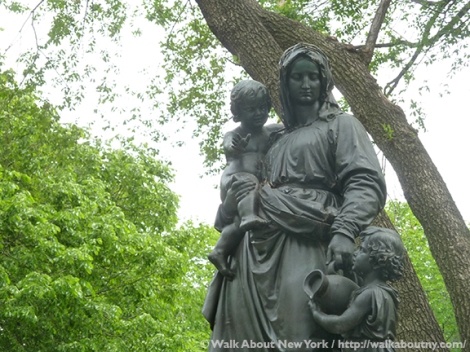 Daniel James’ vision for the temperance fountain was to foster charity.

Still in its original location, between 15th and 16th Streets along Union Square West, in 2002 the fountain was conserved as part of a renovation of Union Square. Although there have been many changes to the square and the city since its dedication, this quintessentially Victorian fountain remains a comforting gathering spot, continually fulfilling its mission of beautification and public enrichment.

The James Fountain is the finest example of temperance efforts.

Discover the James Fountain and much more in Union Square when you are part of our Five Squares and a Circle Tour. This unique Tour takes you from the quiet environs of Washington Square, the first of the five squares, to the hustle and bustle of Columbus Circle. See how the city developed through its historic five major squares and its best-known roundabout. Take the Tour; Know More!

ALL PHOTOS AND TEXT, EXCEPT NOTED QUOTES, © THE AUTHOR 2017