“… to be loving and caring, and show the affection that is the hallmark of gay people … and it had to have equal representation of men and women.”
—Requirements made by Peter Putnam (1927–1987) of the artwork he commissioned

Across the street from the historic Stonewall Inn in Christopher Park, a gated public park of 0.19 acres, stand sculptures of two men, one with his hand on the other’s shoulder; and next to these on a bench figures of two women sit, with one having her hand on the other’s thigh. Today these simple gestures by bronze figures strike us as innocent; but they were enough to rouse objects from neighborhood residents. Thankfully times and people have changed!

The lesbians figures are modeled on life partners, Beth Suskin and Leslie Cohen.

Commissioned in 1979 by Peter Putnam, a wealthy arts patron from Louisiana and trustee of the Mildred Andrews Fund, to commemorate the 10th anniversary of the Stonewall Riots, the figures are in the signature style of George Segal. Although other artists had been approached, settling on Mr. Segal was a bit of a controversy within the gay community. Some believed that a gay artist should have been awarded the commission. Peter Putnam and the Mildred Andrews Fund commissioned George Segal for another politically-charged sculpture, the Kent State Memorial, 1979.

This sculptural grouping pays tribute to the Stonewall Riots, which took place in and around Christopher Park. It is believed that the police raid on the Stonewall Inn was not conducted for the usual reason, harassment of the homosexual community; but rather as a show of force by the police to punish the mafia bosses who controlled not only Stonewall, but all gay and lesbian bars in New York City. The police wanted their weekly payoff. Stonewall took in an estimated $6,000 per week; the police were paid $2,000 weekly. 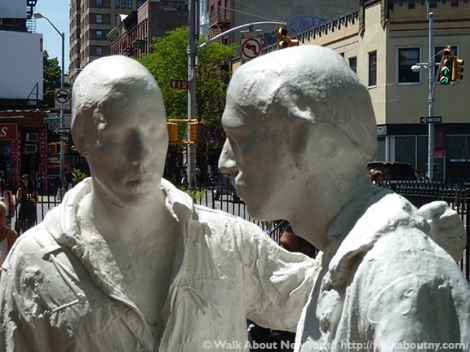 The Stonewall Inn has been on the National Register of Historic Places since January 1999, and National Historic Landmark since February 2000. On June 24th 2016, with U.S. Secretary of the Interior Sally Jewell making the announcement, in front of Stonewall, that it is a National Monument, under the umbrella of the National Park Service. These designations are not limited to the bar itself; they include the streets around it, because it was in the streets where the riots took place. The listings recognize the uprisings that raised the consciousness of members of the gay community to stand up for and demand their rights and full recognition. 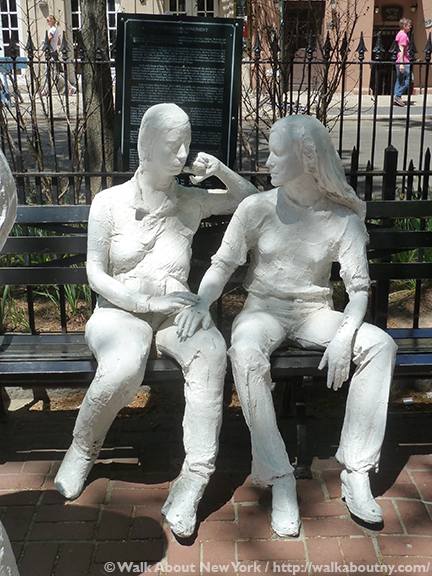 The female figures sit on what is called a World’s Fair-style bench.

The addresses 51 and 53 Christopher Street were once side-by-side, two-story stables, built in 1843 and 1846. A restaurant was opened there in the 1930s after alterations were made to the two buildings, and they were connected into one. The restaurant was known as the Stonewall Inn Restaurant in the 1950s. More renovations were made in 1966, and it reopened the following year as a private club called the Stonewall Inn, a bar with a dance floor, catering to gay men, as many such businesses did in Greenwich Village.

In light snow I pose with the male figures of “Gay Liberation.”

The occasion that the Gay Liberation Monument honors is a series of riots that began in the wee hours of June 28th 1969. The police conducted a less-than-routine raid at the Stonewall Inn. As bar patrons were marched to waiting police vans a crowd gathered, and began taunting the police. It is not known what sparked the violence; but the police were pushed back into the bar by the protesters. NYPD backup was called as the melee escalated. Eventually the police prevailed with 13 people arrested. News of the raid and the push back to it soon spread through the gay community. Over the next four nights gay activists and neighborhood residents gathered outside Stonewall to protest. These events mark the start of the gay rights movement in the U.S. and around the world

My husband joins the other half of “Gay Liberation” on the bench.

“I’m extremely sympathetic to the problems that gay people have. They’re human beings first. I couldn’t refuse to do it.”
—George Segal (1934–2000)

George Segal’s work has been called Pop Art, a style of the last third of the 20th century. He was born and raised in New York City. Mr. Segal’s work can be found in more than 65 public collections. His pieces include The Holocaust, in San Francisco’s Golden Gate Park and The Commuters in New York’s Port Authority Bus Terminal; both of which date from 1982. He created three tableaux for the Franklin Delano Roosevelt Memorial in Washington, DC in 1995.

“The sculpture concentrates on tenderness, gentleness and sensitivity as expressed in gesture. It makes the delicate point that gay people are as feeling as anyone else.”
—George Segal, talking about his bronze, “Gay Liberation”

Mr. Segal’s Gay Liberation is in line with his other work. The work was created using a process by which plaster molds, developed from human models, are filled with plaster, or in this case bronze; white lacquer is then used to coated the surfaces. The distinctive result has an otherworldly quality, drawing viewers to the work.

“Gay Liberation” was gift from the Mildred Andrews Fund to the City of New York.

Cast at the Seward Johnson Atelier in Hamilton Township, NJ, the sculptural grouping was completed in 1980. For several reason Gay Liberation was sent to the University of Wisconsin at Madison for 12 years. The city had approved its installation in Christopher Park; but funds to install it were not allocated. In addition, there was public opposition by longtime neighborhood residents who objected to same-sex couples showing affection. Also, renovation of Christopher Park, designed by landscape architect Philip Winslow and completed in 1985, was planned. A second casting of the artwork was installed on the Stanford University campus in Palo Alto, California. This version met with resistance, and thousands of dollars in vandalism. 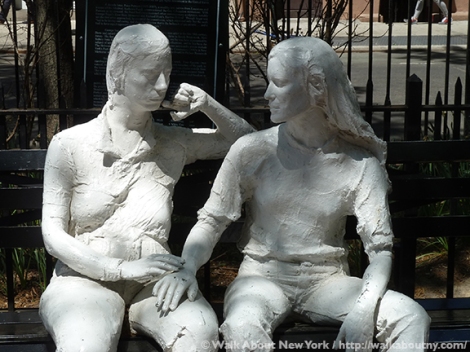 This innocent gesture was one reason for some neighbors to object to “Gay Liberation.”

Finally on June 23rd 1992 the monument was unveiled. New York City Mayor David N. Dinkins and the city’s Parks Commissioner, Betsy Gotbaum were on hand to do the honors. The objections of the early 1980s, which had sidelined the project’s completion had diminished. The devastating effect of the AIDS crisis on the gay community, especially in Greenwich Village where so many gay men lived, helped to soften people’s point-of-view as well. Acceptance, inclusion, and tolerance had become the order of the day. 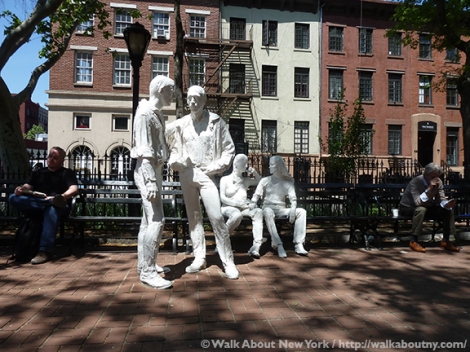 “Gay Liberation” is in Christopher Park, mistaken for Sheridan Square, which is nearby.

When you are part of our Gay Village Walking Tour you will discover the Gay Liberation Monument, Stonewall and more gay history and sights within Greenwich Village. Take the Tour; Know More!

In addition, we wrote about another work of art by George Segal. It can be seen at the Whitney Museum of American Art.
A ‘Walk’ in The Whitney