“That great giant, Atlas, whose shoulders bear the circling sky.” —from “Metamorphoses,” A.D. 8, by Ovid

“Atlas” silhouetted against the Cathedral of St. Patrick.

Directly across Fifth Avenue from the seat of the archbishop of the Archdiocese of New York, the Cathedral of St. Patrick, stands “Atlas.” Many people mistake what it is that Atlas holds on his shoulders; most people say it is the Earth that he holds. It is not. As Ovid and other writers of the ancient world tell us, Atlas holds the sky aloft. He personifies αντοχή, Greek for endurance.

“Atlas” is seen over the heads of the crowd from within the Cathedral of St. Patrick.

“Atlas the baleful; he knows the depths of all the seas, and he, no other, guards (or holds) the tall pillars that keep the sky and earth apart.”
—from “Odyssey,” eighth century B.C., by Homer 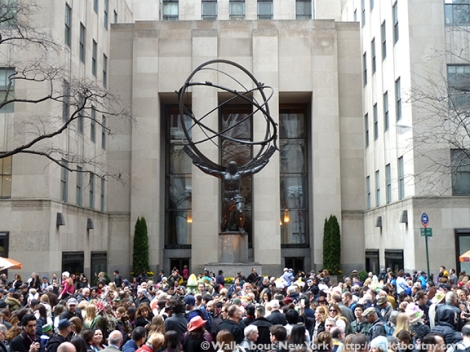 “Atlas” watches over the crowd during the annual Easter Parade on Fifth Avenue.

Atlas led the Titans in a war against Zeus and the gods of Mount Olympus. After the later defeated the former Zeus devised a punishment for Atlas’ hubris; the Titan’s leader would carry the heavens upon his shoulders for eternity. Atlas was the Titan who taught man astronomy, a tool used by sailors to navigate the seas, and one used by farmers to measure the seasons. Atlas is the god who turns the heavens on its axis, causing the stars to revolve. 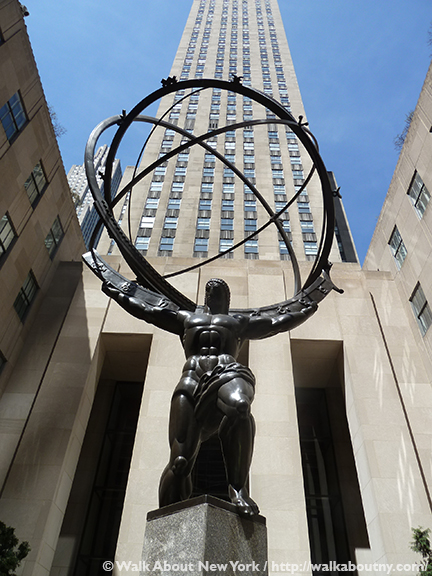 Heracles encountered Atlas during his quest for the Golden Apples of the Hesperides, as part of his Twelve Labors. Heracles agreed to carry the heavens on his shoulders while Atlas fetched the apples. The hero also slew the Hesperian Dragon, which is depicted in Greek vase painting as the Titan’s tormentor, and Hercules built two great pillars at the ends of the earth, to relieve the Titan of his burden.

With his stylized six-pack, does “Atlas” really look like Mussolini?

“Atlas through hard constraint upholds the wide heaven with unwearying head and arms, standing at the borders of the earth before the clear-voiced Hesperides; for this lot wise Zeus assigned to him.”
—from the “Theogony,” the eighth century B.C., by Hesiod 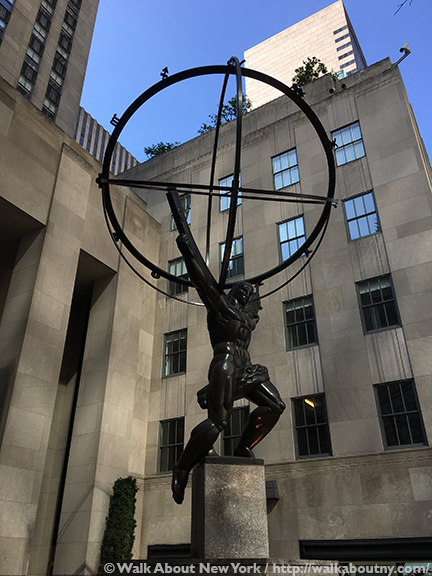 “Atlas” seen from the left.

As tall as a four-story building, the 45-foot-high sculpture was designed by Lee Lawrie (1877–1963) and modeled by Rene Chambellan (1893–1955) as part of the overall artistic plan of what was originally to be called Rockefeller City. This was one of the last construction projects in the United States that purposely integrated art into its grand design scheme, as the Beaux-Arts style did.

The German-born Mr. Lawrie collaborated with the American Mr. Chambellan to produce one of Rockefeller Center’s most widely-recognized artworks out of more than 50 that were created for what has become Midtown Manhattan’s centerpiece. Both men designed multiple artworks at Rock Center. Unveiled in 1937 “Atlas” is sculpted in the Art Deco style, as is the entire complex, both buildings and works of art. Cast in bronze the sculpture’s exaggerated musculature and stylized facial features and body parts are typical of the Art Deco style. “Atlas” weighs seven tons and is the largest piece of sculpture at the 22-acre complex.

“Atlas” seen from the right.

Placed in the forecourt to the main entrance of 630 Fifth Avenue, a piece of Rock Center known as the International Building, “Atlas” figures in two pieces of popular culture. One is a postage stamp. On June 29, 2001 the United States Postal Service issued the Atlas stamp in New York. Kevin Newman from Santa Monica, California designed the stamp; he based his design on a photograph taken by Horst Hamann. Eight hundred million stamps were printed. The Atlas stamp is part of the American Culture Series. The second is on TV. “Atlas” has been featured in almost every episode of the television series “30 Rock.” It is used in various scenes to help establish the location, Rockefeller Center, where the comedy takes place. 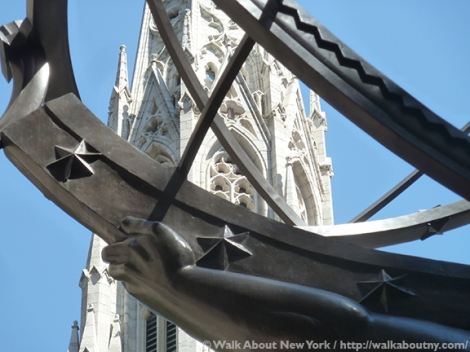 The back of the arch on the shoulders of “Atlas” is decorated with six-pointed stars.

“Does not even now great Atlas struggle to bear up the weight of heaven, far from his fathers’ land and his possessions? But almighty Zeus set free the Titans for as time passes and the breeze abates, the sails are set anew.”
—from the “Pythian, Ode 4,” the fifth century B.C., by Pindar

“Atlas” in the falling snow at Christmastime.

After the bronze figure was installed some people observed that its face looked like Italy’s dictator, Benito Mussolini, known as il duce, meaning ‘the leader’ in Italian. James Montgomery Flagg (1877–1960), the American artist known for his poster illustrations, said “ ‘Atlas’ looks too much as Mussolini thinks he looks.” The artwork is used as a symbol for the Objectivist movement, and is associated with Ayn Rand’s 1957 novel Atlas Shrugged. 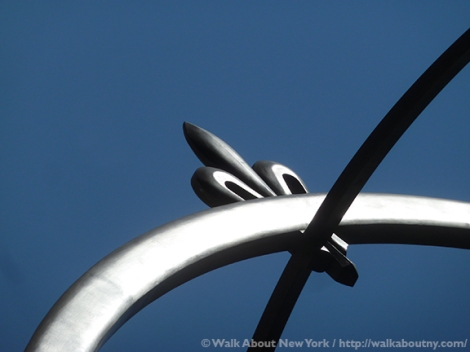 The fleur-de-lys marks north, pointing to the Polar Star on the armillary of “Atlas.”

The armillary sphere’s north-south axis points to the North Star as seen from New York City, and is marked by a fleur-de-lys. Across Atlas’s shoulders sits a wide, arched beam; a frieze is displayed on it of the traditional symbols used for the planets in our solar system.

Because of the skyscrapers surrounding “Atlas” he is rarely bathed in sunlight.

“Prometheus: I am distressed by the fate of my brother Atlas, who, towards the west, stands bearing on his shoulders the pillar of heaven and earth, a burden not easy for his arms to grasp.”
—from “Prometheus Bound,” the fifth century B.C., by Aeschylus 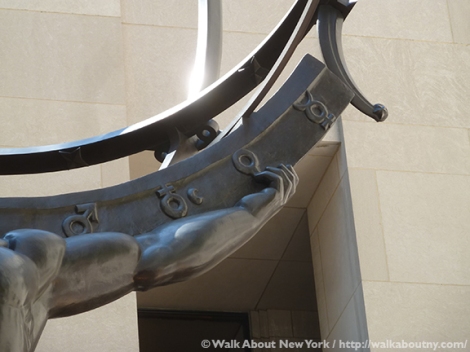 The symbol for the planet Jupiter is not seen on the arch resting on the shoulders of “Atlas.”

Above the bronze’s bulging left arm, reading from left to right are the symbols for Mars, shield and spear; Earth, cross-bearing orb; Venus, a hand mirror; and Mercury, the god’s winged helmet and caduceus. Next to Earth is a small crescent, symbolizing the moon. 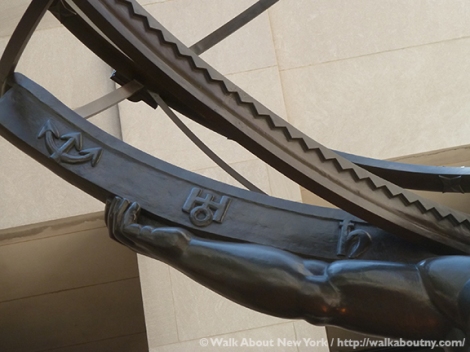 The symbol for Jupiter is behind the head of “Atlas;” it was Jupiter who punished Atlas.

Above sculpture’s muscular right arm, reading from left to right, are the symbols for Neptune, the god’s trident; Uranus, ‘H’ symbol taken from discoverer’s last name, Herschel; and Saturn, the god’s sickle.

“Atlas,” detail, was designed by Lee Lawrie and modeled by Rene Chambellan.

Affixed to one of the armillary’s rings are symbols for the twelve constellations—the zodiac—through which the sun passes during the year. Above is Sagittarius, the archer, the ninth astrological sign. 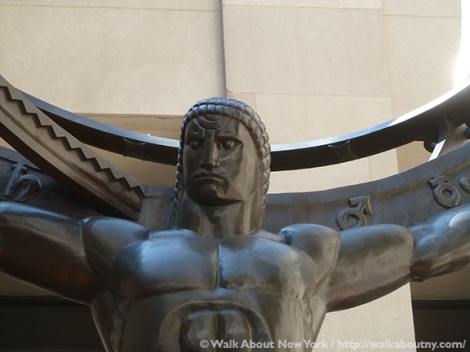 The heavens are weighty, causing the cross look on the face of “Atlas.”

Our Rockefeller Center Art Walking Tour will lead you on art trek through Rock Center. You will discover “Atlas” and 50 more works of art when you join us. Take the Tour; Know More!