“I was impressed by the sight of brawny workmen swinging out on girders and riveting the lacy skeletons of the earliest skyscrapers on lower Manhattan.”
—Frederick Dana Marsh (1872–1961) 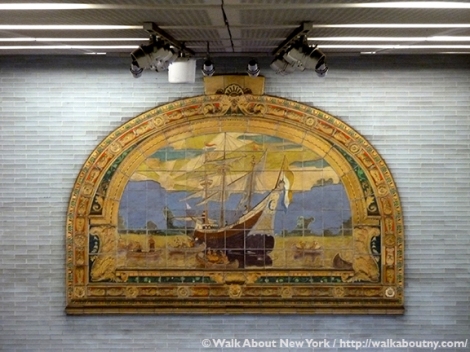 “The Half Moon,” one of the Marine Grill Murals.

Artist Frederick Marsh drew and painted New York during a period when its harbor was bustling with commerce, when it truly was a major port city. One subject that he returned to repeatedly over the course of his career was ships and boats on the water. New York City grew rich and famous as the premiere port city of America. Here we have examples of Mr. Marsh’s favorite subject in a unique material; and they are now found in a most unusual location.

“The Half Moon,” detail, one of the Marine Grill Murals.

Hidden away and mostly ignored by bustling passengers at the William Street entrance to the Fulton Street station are a collection of beautiful terracotta tile murals. They once enlivened the walls of a restaurant originally called the Rathskeller; but the beauty of the murals was so strong the name was changed to the Marine Grill, for the murals’ subject. It was a grand restaurant located in the world’s largest and one of the most luxurious hotels, the McAlpin.

“The Half Moon,” detail, one of the Marine Grill Murals.

McAlpin Hotel, located in Herald Square on the southeast corner of West 34th Street and Broadway, opened in 1912. The building soared 25-stories high, and could accommodate 2,500 guests. Hotel amenities included a large Turkish bath and plunge pool, covering the entire 24th floor; a fully equipped hospital, located on the floor below the Turkish bath; an in-house orchestra; and a telephone in every room, the first hotel to offer such a modern service for each room.

The hotel prided itself on its customer service. To give its night workers a clean, safe place to sleep after their shift ended, the hotel set aside the entire 16th floor for them to sleep during the day; the New York Times playfully called it the “Sleepy Sixteenth!” 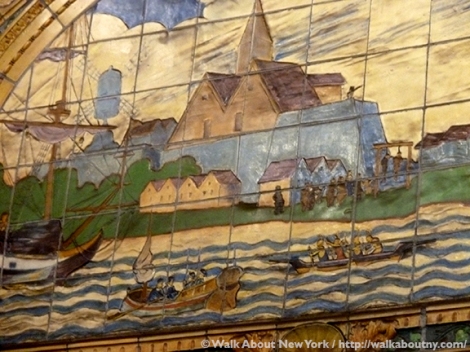 Luxuriousness reached to the basement restaurant. The Rathskeller (from German-speaking countries for a bar or restaurant located in the basement of a city hall, Rathaus, or nearby, it morphed to apply to bars and restaurants located in any basement) was noted for its forest of archways and columns, completely clad in ceramic tile in an array of shades of terracotta, brown, gold, red and green. Mr. Marsh designed six terracotta lunette-shaped murals, repeated several times; they covered the walls of the restaurant. Telling the story of New York City’s maritime history, the elaborate murals featured boats, canoes, tugs, ships, steamers, and ocean liners over a 300-year period. The space was an architectural masterpiece; the murals served as focal points around the restaurant.

“It is my object then to depict the noble side of modern industry, to emulate the efforts of the real workers, the investors, the engineers, the electricians, the great army of toilers – to express in ‘lofty allegory’ the drama of modern life.” —Frederick Dana Marsh

The “British Man-O-War,” detail, one of the Marine Grill Murals.

Manufactured by the Atlantic Terra Cotta Company of Staten Island, one of the companies that produced the terracotta tiles for subway stations in the early 20th century, the murals helped to make the Grill Room the fashionable meeting place for Herald Square shoppers lunching, a late-night rendezvous, or an elegant dinner.

The “British Man-O-War,” detail, one of the Marine Grill Murals.

Well past its glory days the McAlpin Hotel was converted to cooperative apartments in 1989; the Marine Grill was demolished, and the glorious tile murals were packed into dumpsters, headed for landfill! Thankfully an example of each of the six scenes that made up the 20 mural set was preserved. Susan Tunick, president of the obscure, non-profit organization Friends of Terra Cotta, saw the disassembled murals in the dumpsters, and brought them to the attention of the New York Landmarks Preservation Committee. The tiles were rescued from outside the former hotel’s construction site.

The “Clermont,” one of the Marine Grill Murals.

In an excellent example of cooperation across several organizations, public and private, the New York Landmarks Conservancy, the Municipal Art Society, the New York Landmark Preservation Commission, the Metropolitan Transportation Authority (MTA), and the Friends of Terra Cotta, Mr. Marsh’s murals were saved from destruction. The MTA’s Arts and Design department restored the murals; and then college art students, as part of an intern program, painstakingly reassembled the pieces as if they were giant jigsaw puzzles. The murals were installed in a corridor at floor-level height at the Fulton Street and Broadway subway station in 2000. 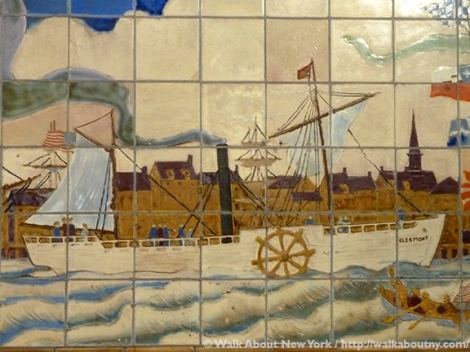 The “Clermont,” detail, one of the Marine Grill Murals.

The Fulton Street subway station got a 10-year, $1.4 billion facelift, in an effort to create what the MTA likes to call “Grand Central of Downtown.” The murals, which measure 15 feet wide and 10 feet tall, were removed, stored and then re-positioned along the renovated corridor near the William Street entrance to the station, where they are passed by thousands of people who know nothing of their background. The station re-opened in November of 2014.

The “Mauretania,” one of the Marine Grill Murals.

Mr. Marsh’s murals depict six historic scenes set in New York Harbor and the rivers that feed into it. Beginning in 1609, the first scene shows Native Americans paddling their canoes out to meet the Half Moon, the ship Henry Hudson sailed for the Dutch. The second features two Dutch caravels, small, easily maneuverable sailing ships that the Portuguese developed in the 15th century; they are anchored off the Dutch colony of New Amsterdam. The third depicts a British man-o-war that is firing her canons at the city.

The “Mauretania,” detail, one of the Marine Grill Murals.

“Among New York’s most interesting studios is that of Fred Dana Marsh, one of America’s leading mural painters. Although his creations are designed to enliven lofty domes and high-walled rooms, his habit is to paint them on the floor.”
—from a 1928 short subject film entitled, Interesting People—A Master of Murals, artist Fred Dana Marsh

The “Mauretania,” detail, one of the Marine Grill Murals.

The fourth scene is Robert Fulton’s North River Steamboat, later known as the Clermont, taking its name from the estate of Robert Livingston, who funded his steamboat research. The last two murals depict twentieth-century scenes. The 1906 “R.M.S. Mauretania,” the flagship of the Cunard Line, is maneuvered by tugs; R.M.S. stands for Royal Mail Ship. This ocean-going vessel was the largest until 1911 and the fastest until 1929. In the final scene the 1908 Fall River Line Steamer “Commonwealth” is shown leaving for its journey up the East River to Long Island Sound, headed for Fall River, MA. 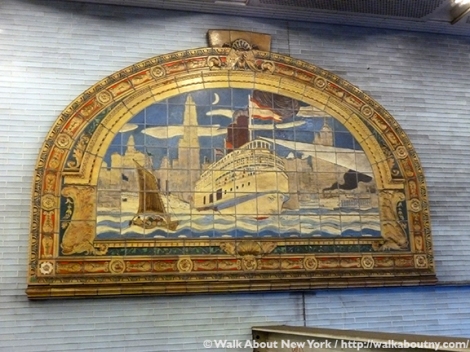 The “Commonwealth,” one of the Marine Grill Murals.

The murals are very much giant mosaics, a picture or pattern produced by arranging small colored pieces of stone, tile, or glass. They were designed and painted by Mr. Marsh; fired and glazed at the Atlantic Terra Cotta Company in the New York borough of Staten Island; then installed at the McAlpin Hotel, as Mr. Marsh supervised. 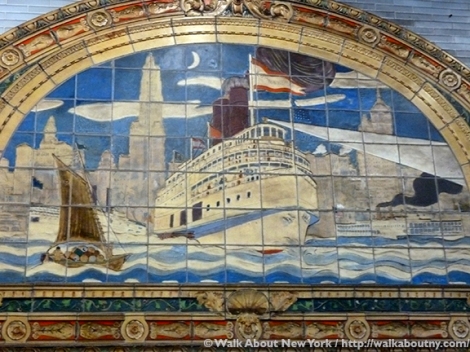 The “Commonwealth,” detail, one of the Marine Grill Murals.

Frederick Dana Marsh was well known during his creative period, from 1895 to 1929; but has mostly faded from memory. One of his sons, Reginald Marsh (1898–1954) born in Paris where his parents married, would go on to become a distinctively New York artist, one of the early twentieth century’s best known; he captured this city in a variety of media. The younger Marsh also became a muralist; his father’s influence can be seen in works depicting similar subjects. His best-known work can be seen in the main, oval-shaped hall of the Alexander Hamilton Custom House at Bowling Green, which houses the Smithsonian’s Museum of the American Indian. 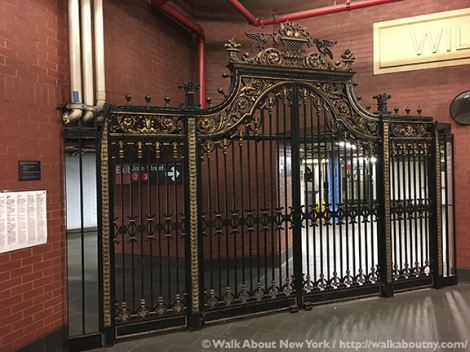 The former gate to the Marine Grill is part of the subway installation.

Another element of the Grill Room is part of the installation at the Fulton Street subway complex; it is the cast-iron gate that was its entrance. Today it functions as a decorative work of art for the station and a functional part of the station; it separates the tollbooth entrance area from the passing passengers who are in the system on the other side of the turnstiles at Williams Street.

Aquatic creatures, such as this dolphin, form the frame for all the Marine Grill Murals.

When you are part of our Subway Art Tour Four you will get to marvel at these historic works of art first hand. Delight in the historic art and the recently-commissioned, permanent art in the museum at the core of the Big Apple. Take the Tour; Know More!

The keystone for all the Marine Grill Murals are the same.