“The Lady with the Lamp, the Statue of Liberty, stands in New York Harbour. Her back is squarely turned on the USA. It’s no wonder, considering what she would have to look upon. She would weep, if she had to face this way.”
—Claudia Jones (1915–1964, Trinidad-born journalist and activist)

We mark the 242nd adoption of the Declaration of Independence by the Second Continental Congress with some unusual views of what has become the symbol of American freedom, the Statue of Liberty. It is usually seen by world from its front, square on and full length. Here are some less-than-typical views of the statue that is officially titled Liberty Enlightening the World. It is a work of art by sculpture Frédéric Augustus Bartholdi (1834–1904) and a marvel of technology by engineer Gustave Eiffel (1832–1923). 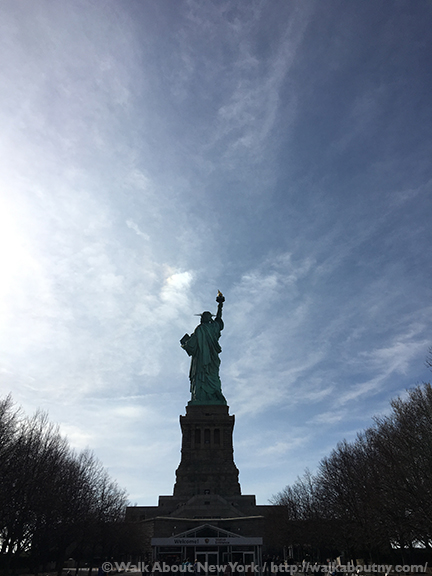 The back of the Statue of Liberty.

Thou warden of the western gate, above Manhattan Bay,
The fogs of doubt that hid thy face are driven clean away:
Thine eyes at last look far and clear, thou liftest high thy hand
To spread the light of liberty world-wide for every land.
—“Liberty Enlightening the World,” 1917, Henry van Dyke (1852–1933, American author, educator, and clergyman) 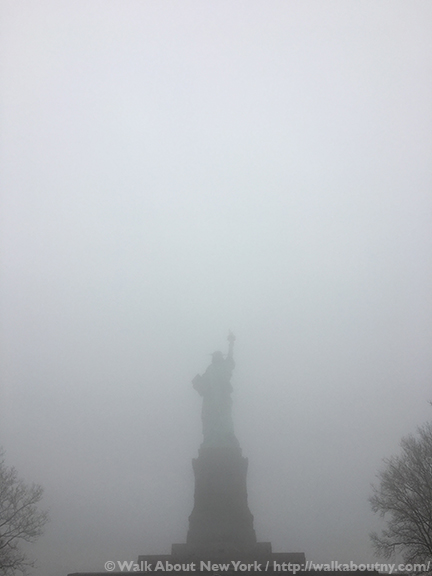 A foggy Statue of Liberty, April 2018

“I grew up in New Jersey and never went up the Statue of Liberty.”  —Buzz Aldrin (1930–present)

Miss Liberty and the Stars and Stripes.

“You sail into the harbor, and Staten Island is on your left, and then you see the Statue of Liberty. This is what everyone in the world has dreams of when they think about New York. And I thought, ‘My God, I’m in Heaven. I’ll be dancing down Fifth Avenue like Fred Astaire with Ginger Rogers.’ ”
—Frank McCourt (1930–2003, Irish-American author) 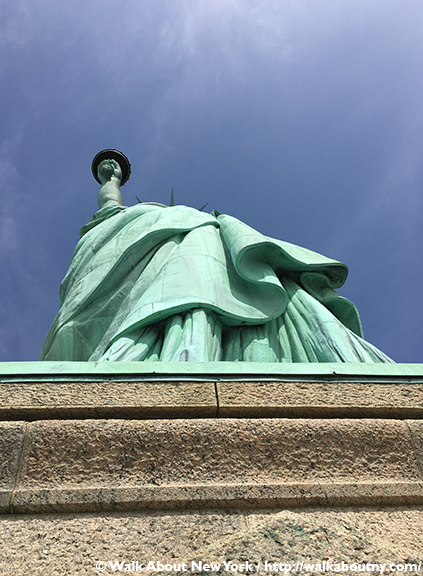 “United States: the country where liberty is a statue.”
—Nicanor Parra (1914–2018, Chilean poet, mathematician, and physicist) 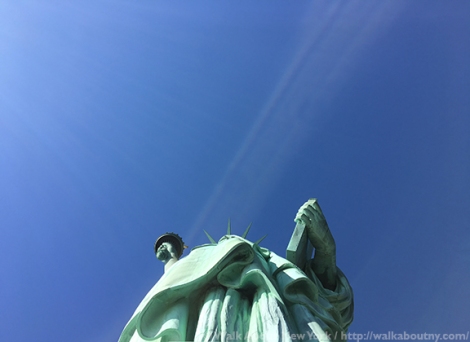 “It looked very different from the Statue of Liberty, but what did that matter? What was the good of having the statue without the liberty, the freedom to go where one chose if one was held back by one’s color? No, I preferred the Eiffel Tower, which made no promises.”
—Josephine Baker (1906–1975, remarked after she had seen the Eiffel Tower) 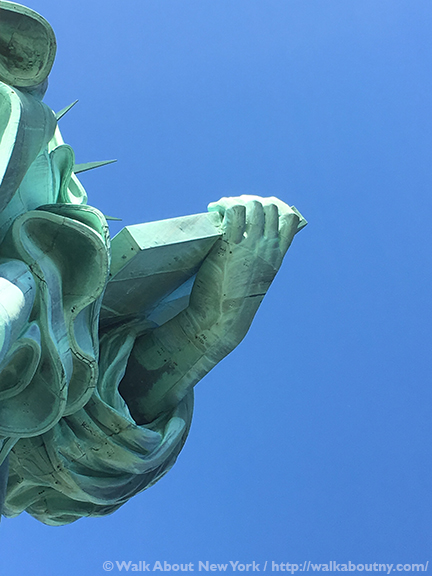 “Many of America’s and New York’s sons and daughters are around the world fighting for the freedoms that the Statue of Liberty stands for.”
—Michael Bloomberg (1942–present, former NYC mayor) 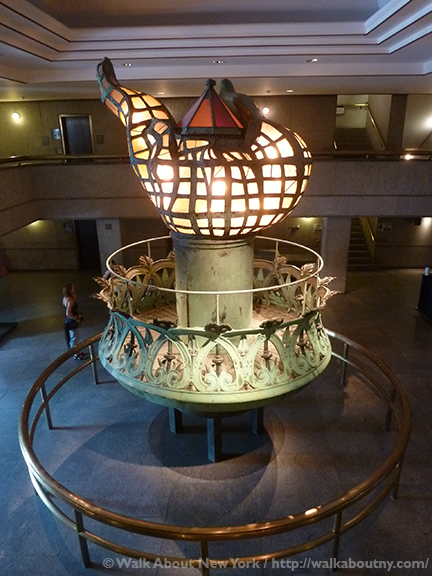 Miss Liberty’s original torch in the lobby of statue’s pedestal. 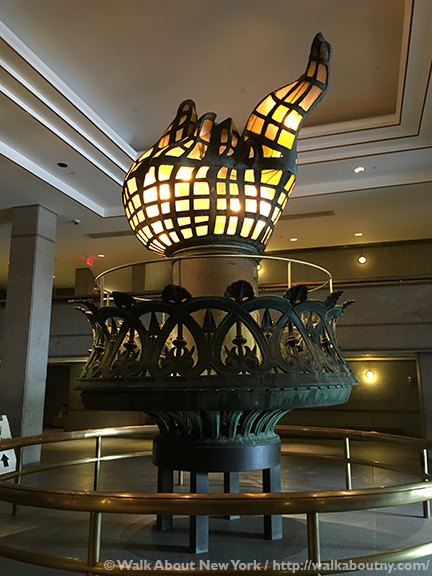 Miss Liberty’s original torch in the lobby of statue’s pedestal.

“The first time I saw America was from my perch on the mast of a Spanish naval ship, where I could spot the Statue of Liberty reaching proudly into the open, endless American sky.”
—Jose Andres (1969–present, Spanish-American chef) 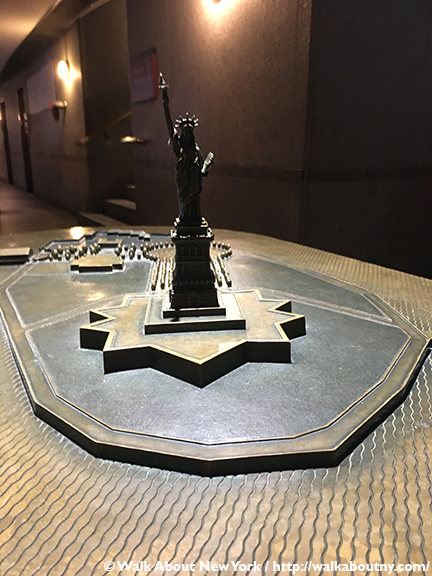 Liberty Island in miniature in the pedestal’s lobby.

“And you have to remember that I came to America as an immigrant. You know, on a ship, through the Statue of Liberty. And I saw that skyline, not just as a representation of steel and concrete and glass, but as really the substance of the American Dream.”
—Daniel Libeskind (1946–present, Polish-American architect, responsible for the design of the new World Trade Center site) 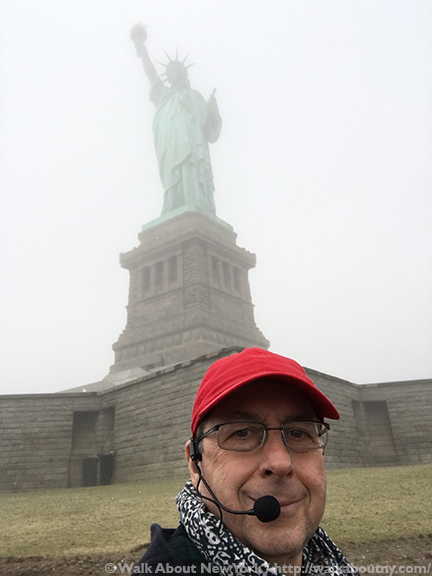 Your tourist guide Phil is wired up to bring you the best of New York.

“I’ve always had a strong feeling for the Statue of Liberty, because it became the statue of my personal liberty.”
—David Antin (1932–2016, American poet)

All of our guided tours are focused on art, architecture, history (which is what the Statue of Liberty is all about) and a good time. Discover where Emma Lazarus (1849–1887) lived with her father in Greenwich Village when you are a guest on our Greenwich Village Walking Tour. Ms Lazarus wrote “The New Colossus,” the 1883 sonnet with the following well-known, often-quoted lines.
“Give me your tired, your poor
Your huddled masses yearning to breathe free”
Take the Tour; Know More!