“All had expected something great, something of angelic power and beauty and when a feebly-pretty idealess thing of bronze was revealed the revulsion of feeling was painful. The figure resembles a servant girl executing a polka.”
—from the review in the New York Times when the Bethesda Angel was unveiled, May 31, 1873 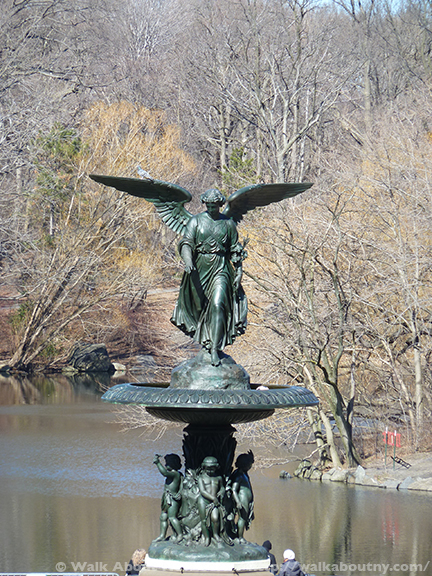 The Angel of the Waters is majestic and lovely year round.

Clearly the Bethesda Angel, also known as the Angel of the Waters, was not always the beloved figure that she is today. Nonetheless this is an important work of art. Its creation marked the first major sculptural commission awarded to a woman in the United States. And that woman was a lesbian, Emma Stebbins (1815-1882), daughter of a wealthy New York banker. In keeping with our tradition of highlighting LGBT-related topics for Gay Pride Day we focus on her grandest achievement. 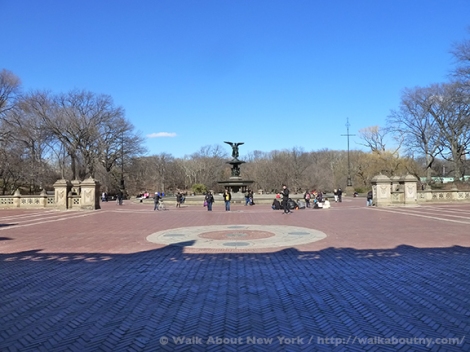 There is some speculation that she was awarded the commission for the fountain because her brother, Henry Stebbins was president of the park’s Board of Commissioners; he was also president of the New York Stock Exchange. However, the results—and the fabulous Angel—loudly proclaim that she was well-qualified for the task. In addition, the National Academy of Design in New York exhibited Miss Stebbins’ work; and in 1842 she was put forth as an associate member of the organization, the only position open to a non-professional. Because aspiring American sculptors of the mid-19th century could not find quality training in the U.S., they went to Rome. Of the American woman who followed this path, the expatriate and author Henry James (1843–1916) referred to them as “that strange sisterhood of American ‘lady sculptors’ who at one time settled upon the seven hills in a white marmorean flock.”

The Angel of the Waters is eight feet tall!

Mr. Stebbins paid for his sister, a promising artist whose talent was encouraged by her family, to have sculpting lessons in Rome. While there in 1857, Miss Stebbins met the world-famous American actress, Charlotte Cushman (1816–1876). Born in Boston, Miss Cushman debuted professionally there in 1835. One of her leading men was Edwin Booth, brother to John Wilkes. During her long career she portrayed men and women; her greatest successes were as Lady Macbeth, Hamlet, Romeo, and Meg Merrilies in Sir Walter Scott’s Guy Mannerling. The Times of London had this to say “far superior to any Romeo that has been seen for years;” her performance was a “living, breathing, animated, ardent human being.” 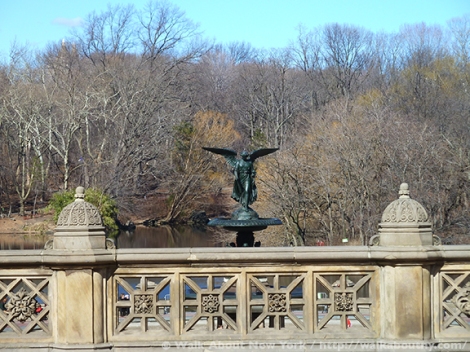 Bethesda Fountain’s Angel of the Waters seen from the 72nd Street crossover.

Following her retirement Miss Cushman moved to Rome. She gathered round her a group of creative lesbians. In this atmosphere is not surprising that a romance was kindled between Miss Stebbins and Miss Cushman. They lived as lovers for many years. In the 19th century, such an arrangement between women, without financial or emotional connections to a husband, was known as a “Boston marriage.” This phrase entered the language of polite society thanks to Henry James, coining it to describe his sister’s living arrangements. Miss Cushman’s behavior is all the more shocking because she was descended from Puritans. 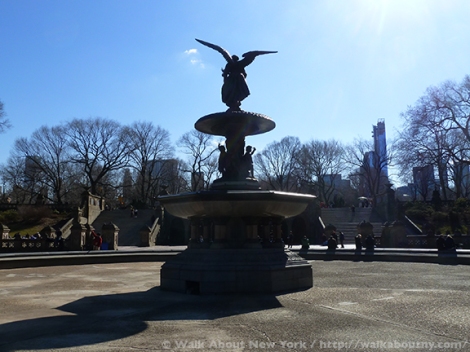 The main basin of Bethesda Fountain is drained and water does not flow in colder weather.

Miss Stebbins, shy and self-effacing, would not have tried to attract prestigious commissions on her own. Rather she was encouraged by her brother and her lover, with whom she had exchanged unofficial vows. She worked on the design of the angel in Rome, from 1861 until she completed it in 1868. Miss Cushman served as the model for the eight-foot tall Angel of the Waters; therefore, it could be said that a lesbian stands in the middle of Central Park at all hours of the day. Angel and fountain were cast at the Royal Foundry in Munich by Colonel Ferdinand von Muller in 1873.

The Angel of the Waters classic beauty and style are stunning!

The Angel of the Waters, holding a lily in her left hand, symbolizing purity, alludes to Biblical healing power. The following passage from the Gospel of St. John, chapter 5, verses 2-4, was printed in a pamphlet distributed at the fountain’s dedication ceremony; it was meant to draw a connection to Miss Stebbins’ artwork.

With her right hand the Angel of the Waters blesses the water, giving it healing powers.

“Now there is at Jerusalem by the sheep market a pool, which is called in the Hebrew tongue, Bethesda, having five porches. In these lay a great multitude of impotent folk, of blind, halt, withered, waiting for the movement of the water. For an angel went down at a certain season into the pool and troubled the water, whosever then first after the troubling of the water stepped in, was made whole of whatever disease he had.” 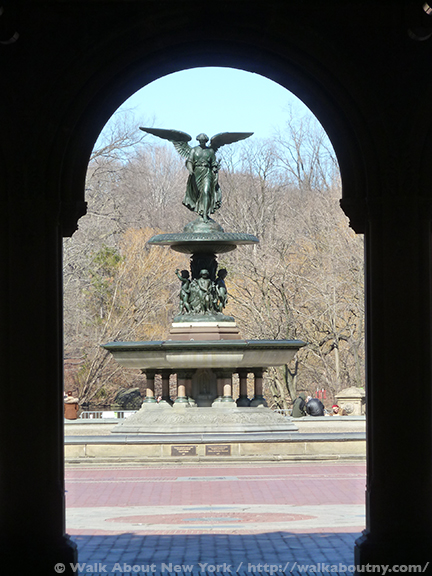 The Bethesda Fountain framed by an arch of the Bethesda Arches, Central Park.

Miss Cushman was diagnosed with breast cancer in 1869. In addition to having two mastectomies, Cushman tried water cures, popular for many ailments from the 1830s through the 1860s in England. Miss Cushman suspended her sculpting career to nurse the actress back to health, becoming her angel of the waters, a connection to her masterpiece. Sadly, Miss Cushman’s treatments were unsuccessful. In her final performance she played Lady Macbeth in New York City in 1875. Fireworks and a torchlight procession through the streets of the City marked the occasion. She died the following year. Miss Stebbins was not mentioned in her lover’s New York Times obituary; it said of Miss Cushman, she “never married, but lived and died a virgin queen of the dramatic stage.” The Susan G. Komen Race for the Cure, which raises money for breast cancer research, ends near Bethesda Fountain. Miss Stebbins never sculpted again, spending her time writing a biography of her lover until her death in 1882, aged 67. A lung disease, possibly caused and made worse by an occupational hazard, inhaling marble dust, took her life. She is buried in her family’s plot at Brooklyn’s Green-Wood Cemetery, a National Historic Landmark.

The water flows from the Bethesda Fountain, Central Park.

Celebrating the Croton Aqueduct, which became operational in 1842, bringing fresh water into New York City from the neighboring county of Westchester, the Bethesda Fountain, and its Angel, styled in Neoclassical composition and dress, were meant to be the only sculptural feature in Central Park. Bethesda Fountain was the only sculptural work of art in the original, winning design plan put forth by Frederick Law Olmsted (1822-1903) and Calvert Vaux (1824-1895) for Central Park. The designers wanted nature to be the art! At a height of 26 feet and a diameter of 96 feet, it remains one of the largest fountains in the City.

Symbolizing purity is a lily in the Angel’s left hand.

“An angel descending to bless the water for healing seems not inappropriate in connection with a fountain; for, although we have not the sad groups of blind, halt and withered waiting to be healed by the miraculous advent of the angel, we have no less healing, comfort and purification, freely sent to us through the blessed gift of pure, wholesome water, which to all the countless homes of this great city, comes like an angel visitant.”
—Emma Stebbins, from what she wrote for the pamphlet at the sculpture’s unveiling 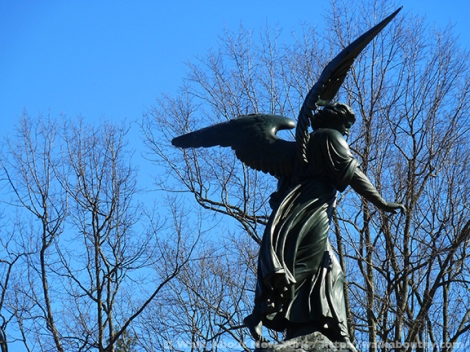 The wings of the Angel of the Waters are enormous!

Bethesda Terrace and its Fountain are the social and spiritual, if not the exact physical center of Central Park. This pool is one of the great gathering spots in New York City. The Terrace and Fountain make up the end point of The Mall, the quarter-mile promenade lined with American Elms trees. This is where Victorian New Yorkers strolled on a Sunday afternoon. After their leisurely walk they would gather round the fountain, socializing. Originally this terrace, overlooking the water feature simply named The Lake and beyond it The Ramble, the “wild” landscape, was called the Water Terrace. After the unveiling of the Angel, its name was changed to Bethesda Terrace.

With The Lake and The Ramble beyond it, Bethesda Fountain is the Park’s main gathering spot, as it was meant to be.

Because the City finally had a reliable source of fresh, clean water, Miss Stebbins, who was one of nine children, wrote about the healing powers of the Biblical pool having a direct connection to the pure water now flowing from the Croton Reservoir, cascading from the fountain. The four putti below the upper basin are allegorical figures of Peace, Health, Purity, and Temperance. Miss Stebbins’ signature can be found on the bronze base that the putti are standing upon in the photo below. 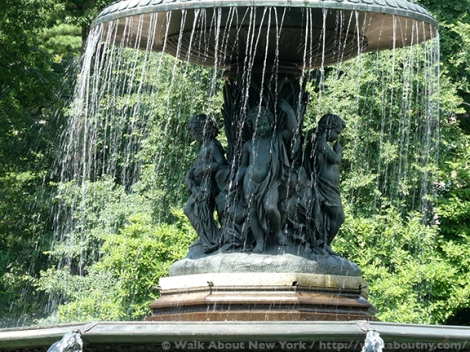 Three of the four putti sheltered by the upper basin of Bethesda Fountain.

The Bethesda Fountain framed by an arch of the Bethesda Arches, Central Park.

The robe of Angel of the Waters flow gracefully.

Discover Miss Stebbins’ Angel of the Waters when you take our Central Park Walking Tour. What other historic gay figures are there in the world’s greatest urban oasis? Take the Tour; Know More!