On the first Monday of September, such as today, Americans celebrate Labor Day. We offer our respect and thanks to the men and women who labor to keep the Big Apple finely polished and running smoothly

“There is no higher religion than human service. To work for the common good is the greatest creed.”
—Woodrow Wilson (1856–1924) 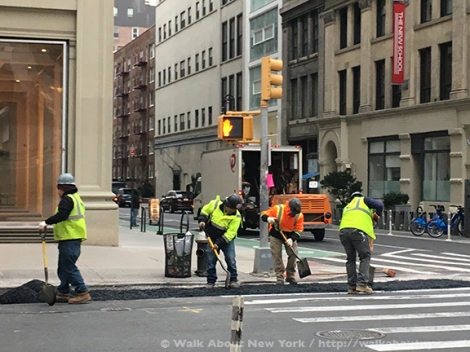 “The three great essentials to achieve anything worthwhile are: Hard work, Stick-to-itiveness, and Common sense.”
—Thomas A. Edison (1847–1931) 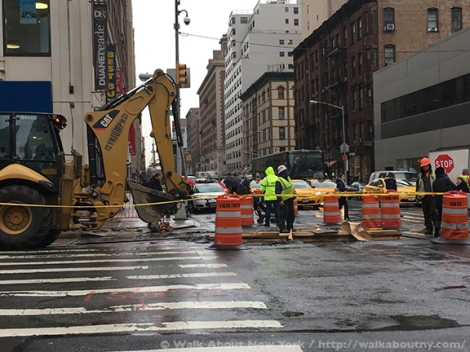 Rain or shine: the work must be done. Thank you!

“Knowledge comes, but wisdom lingers. It may not be difficult to store up in the mind a vast quantity of facts within a comparatively short time, but the ability to form judgments requires the severe discipline of hard work and the tempering heat of experience and maturity.”
—Calvin Coolidge (1872–1933)

“There are two kinds of people, those who do the work and those who take the credit. Try to be in the first group; there is less competition there.”
—Indira Gandhi (1917–1984)

“I know of no single formula for success. But over the years I have observed that some attributes of leadership are universal and are often about finding ways of encouraging people to combine their efforts, their talents, their insights, their enthusiasm and their inspiration to work together.”
—Her Majesty Queen Elizabeth II (1926–present)

Repointing the bricks of the façade at 40 Fifth Avenue.

“The reason a lot of people do not recognize opportunity is because it usually goes around wearing overalls looking like hard work.”
—Thomas A. Edison (1847–1931) 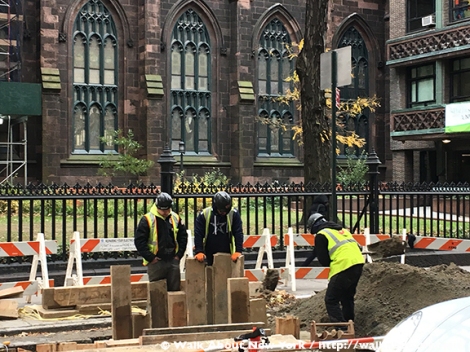 Road work outside the First Presbyterian Church in the City of New York.

“Talent is cheaper than table salt. What separates the talented individual from the successful one is a lot of hard work.”
—Stephen King (1947–present)

“This has always been a motto of mine: Attempt the impossible in order to improve your work.”
—Bette Davis (1908–1989)

Repointing the bricks of the façade at 40 Fifth Avenue.

“All life demands struggle. Those who have everything given to them become lazy, selfish, and insensitive to the real values of life. The very striving and hard work that we so constantly try to avoid is the major building block in the person we are today.”
—Pope Paul VI (1897–1978) 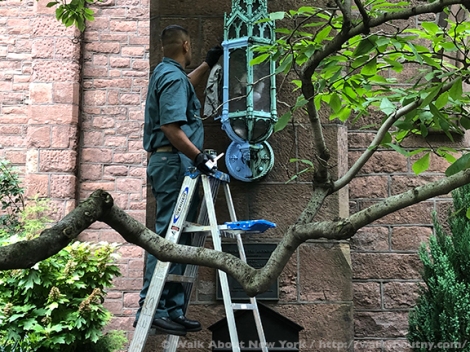 Cleaning the lamp outside Fifth Avenue’s Church of the Ascension.

“No man ever got very high by pulling other people down. The intelligent merchant does not knock his competitors. The sensible worker does not knock those who work with him.”
—Alfred, Lord Tennyson (1809–1893)

Track workers for the NYC subway.

“Whatever you do, do it with all your might. Work at it, early and late, in season and out of season, not leaving a stone unturned, and never deferring for a single hour that which can be done just as well now.”
—P.T. Barnum (1810–1891)

Seen from above, wood chipping.

“Creativity is a habit, and the best creativity is the result of good work habits.”
—Twyla Tharp (1941–present)

Track workers for the NYC subway.

“Our greatness has always come from people who expect nothing and take nothing for granted—folks who work hard for what they have, then reach back and help others after them.”
—Michelle Obama (1964–present)

From Central Park to the Battery Walk About New York labors to bring you the most entertaining guided walking tours in New York City. Autumn in the City is a fine time for seeing the sights; our Art of Rockefeller Center Walking Tour. When winter is here our Subway Art Tours will fill the schedule. Take the Tour; Know More!