“At first, it was hard to work. Everything seemed pretty trivial compared to it. Everybody said, ‘Do something that will take people’s minds off it.’ If you couldn’t figure out how to handle it straight on, which I couldn’t really, do something else that will enable people to have a distraction. I did that, and, after a while, just kind of started to work again, like everybody else did.”
—Charles “Red” Grooms (1937–present) reflecting on how the attacks of 9/11 affected him and his artwork 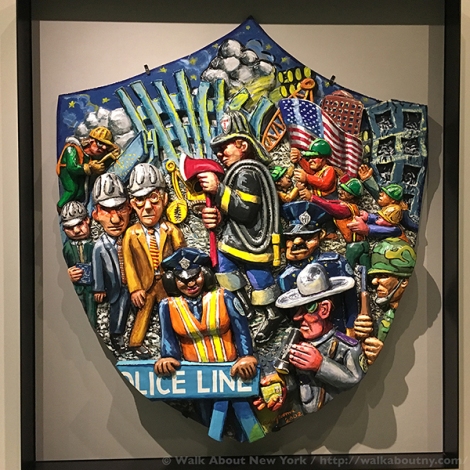 Donated by Dr. Albert and Margarita Waxman, “The Shield” is part of the permanent art collection at the 9/11 Memorial Museum in Downtown Manhattan. It is Mr. Grooms’ only artwork inspired by the attack on the Twin Towers, and honors the men and women who responded to the tragedy of the day’s events. He questions if “The Shield” sufficiently addresses the emotions and actions of 9/11. 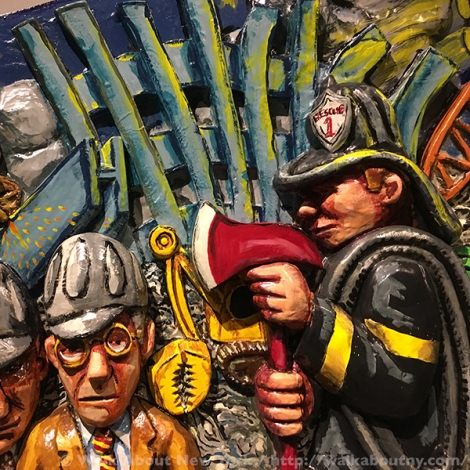 “It’s still kind of on a person’s mind. But it’s just amazing how the cleanup and everything was accomplished so smoothly. It is almost possible to deny it at this point, which is crazy, because you can’t deny it.”
—Red Grooms

Shaped like a police officer’s badge, the enamel on epoxy artwork makes reference to the well-known photo by Thomas Franklin of three firefighters raising an American flag at Ground Zero. In addition, hardhat-wearing recovery workers and city officials, military and law enforcement personnel are depicted.

“It would be good if such a powerful incident could make one a better person. I think in my work, there is only a certain range I can really handle. Some stuff is just beyond my range of being able to express it.”
—Red Grooms 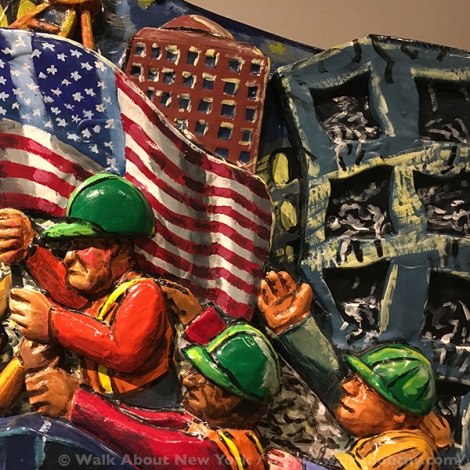 A native of Nashville, TN, Mr. Grooms has lived in New York since 1957. Often fit into the Pop Art genre by critics, the city’s vitality and whimsy has been the running themes of his artwork. Living only a mile from Ground Zero, Mr. Grooms and his wife could see the World Trade Center from their apartment.

Mr. Grooms’ nickname, “Red” came to him from Dominic Falcone of Provincetown’s Sun Gallery; Mr. Grooms was studying with the artist Hans Hofmann at his school in Provincetown, RI.

Our Downtown Manhattan Walking Tour includes a stop at the 9/11 Memorial. Who is listed as the first casualty of September 11th? Take the Tour; Know More!