The quote above is inked up the length of Stan Wawrinka’s inner left forearm in elaborate, curlicued script. The 26-year old Swiss credits these six disembodied imperatives, that appear on the opening page of a lesser-known work of prose by Beckett, with the motivation he needed to achieve his new-found tennis success.

Wawrinka interviewed before the match.

Our second night at the U.S. Open continued the Swiss theme—on the men’s and women’s side—that Roger Federer had begun the night before. The men’s game saw third-seeded Wawrinka matched against an unseeded Brazilian, Thomaz Bellucci.

“As a tennis player, you have to get used to losing every week. Unless you win the tournament, you always go home as a loser. But you have to take the positive out of a defeat and go back to work. Improve to fail better.”
—Stanislas Wawrinka (1985– )

Wawrinka and his Swiss countryman, Roger Federer teamed up at the 2008 Beijing Olympics to win the gold medal in Men’s Doubles. They defeated the favored the American Bryan brothers, twins Bob and Mike, in the semifinals, cruising to victory in straight sets. In the final it took four sets to beat the Swedes, Simon Aspelin and Thomas Johansson to win Olympic gold.

Wawrinka’s stats displayed on the jumbotron.

“I always try to find the positives in losing a match, but it’s not always easy.” —Stanislas Wawrinka

Stan the Man is the reigning Australia Open Men’s Champion. On his way to his first Grand Slam title, Wawrinka became the first player to eliminate both Novak Djokovic and Rafael Nadal in the same Grand Slam tournament. Wawrinka defeated Nadal in the finals. He is only the second man from Switzerland to win a Grand Slam title; Roger Federer is the first. 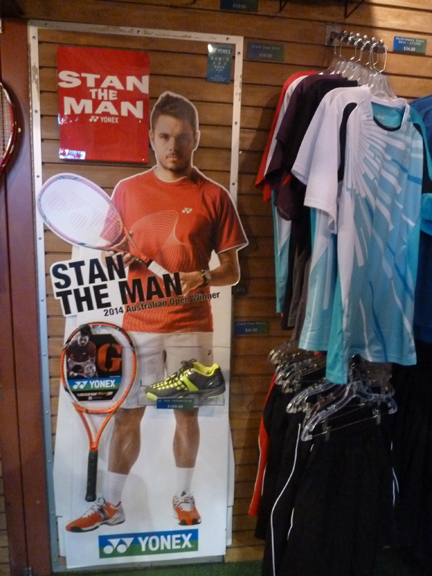 “I grew up surrounded by tennis, so I was more interested in it than football.” —Stanislas Wawrinka

Yonex, a Japanese manufacturer of sporting equipment for tennis and other sports, is one of Wawrinka’s corporate sponsors. Visilab, Fromm, Subaru, Audi and Audemars Piguet are his other sponsors.

“I love to promote our sport. I love grass-roots tennis. I love coaching. I love all parts of the sport. I love the business side.” —Billie Jean King (1943–)

Billie Jean King is one of modern tennis’ greatest boosters. To honor and recognized her tireless contribution to the sport, on and off the court, the United States Tennis Association rededicated its main facility for her—the USTA Billie Jean King National Tennis Center—on the 28th of August 2006.

One section of the Court of Champions at the USTA Billie Jean King National Tennis Center.

“Tennis is a perfect combination of violent action taking place in an atmosphere of total tranquility.” —Billie Jean King

Billie Jean King began her tennis career in the 1960s. At the time only amateur tennis players, not professionals were allowed to participate at the U.S. Open. That changed in 1968. In 1973 King founded the Women’s Tennis Association (WTA). This brought together all of the women’s professional tennis tournaments under one managing umbrella. From a meeting held at London’s Gloucester Hotel the week before Wimbledon the WTA was born. 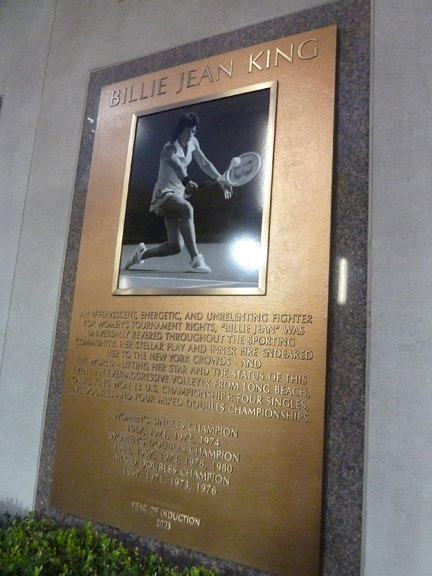 Billie Jean King’s plaque at the Court of Champions.

Along with other legendary tennis players, Billie Jean King has a plaque dedicated to her along the USTA’s Court of Champions, which lines the walkway from the Tennis Center’s South Entrance to the South Plaza that stretches out before Arthur Ashe Stadium. 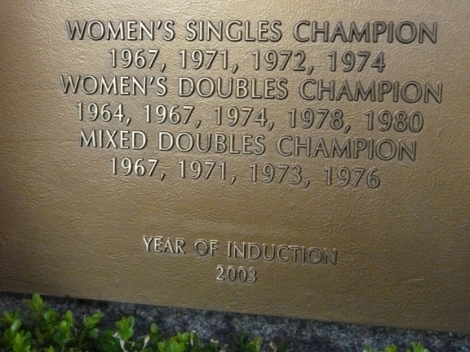 Billie Jean King was a busy tennis player in the 1970s.

“Champions keep playing until they get it right.”
—Billie Jean King

And she did get it right, on the court and off. Her tennis record is open for the world to see. When Billie Jean acknowledged her sexuality—she is an out, loud & proud lesbian—she showed everyone that there is a world-class athlete and world-class person within us all. 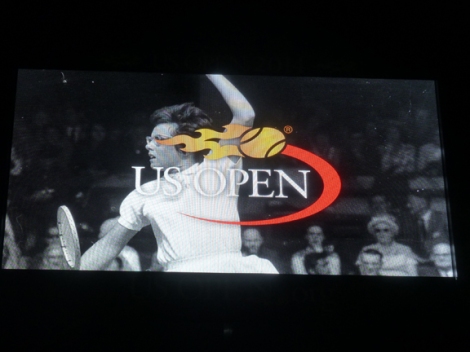 “I wanted to use sports for social change.”
—Billie Jean King

Billie Jean has helped to bring about change, particularly for women’s tennis. She was one of the loudest voices seeking parity in prize money for women with men at tennis tournaments. At the 1973 US Open, for the first time, equal prize money was offered to the men and women. Billie Jean King became the first female athlete whose season earnings passed the six-figure mark.

The evening’s women’s match pitted the 19th-seeded Venus Williams against the unseeded Swiss miss Timea Bacsinszky. Clearly Venus was ‘a good thinker’ this night; she was the victor in straight sets, 6-1, 6-4. It was an uninspired match. 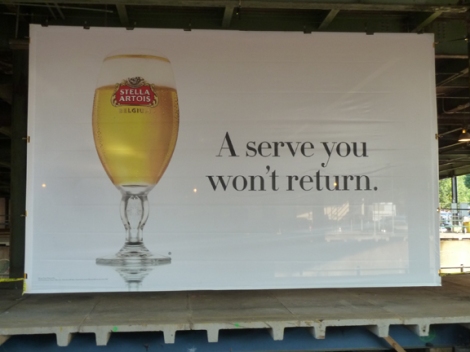 Not the official beer of the U.S. Open; that’s Heineken!

Sponsors’ advertising is everywhere at the U.S. Open. As soon as we get off the Long Island Railroad train the competition for our dollars begins. This somewhat clever, tennis-related sign was only one of many Stella Artois ads lining the train platform. 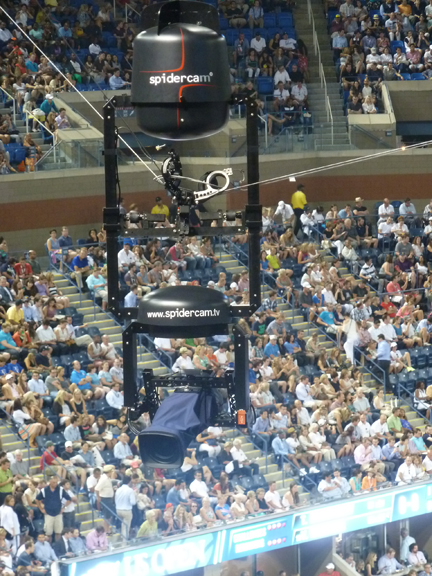 High in the sky spy.

At Arthur Ashe Stadium the Spidercam, the invention of a Hamburg, Germany firm that goes by the same name, has been silently flying above the court and the crowd like Spiderman of the cartoon series and movies since 2009. The prying camera device provides overhead views by moving in three dimensions—left/right, forward/backward and up/down. This can be accomplished thanks to a four-point mechanism of cables attached to the light poles at the top of the stadium. The system, invented in 2005, spies on the action at soccer tournaments, boxing matches and concerts too. This was the first time the Spidercam ventured so close to our seats.

We must wait until next year to attend another U.S. Open tennis match. Until then, we will watch the action on television with the help of the creepy Spidercam!