“A park is a work of art, designed to produce certain effects upon the mind of men. There should be nothing in it, absolutely nothing—not a foot of surface nor a spear of grass—which does not represent study, design, a sagacious consideration and application of known laws of cause and effect with reference to that end.”
—Frederick Law Olmsted (1822-1903,
—landscape architect of Central Park) 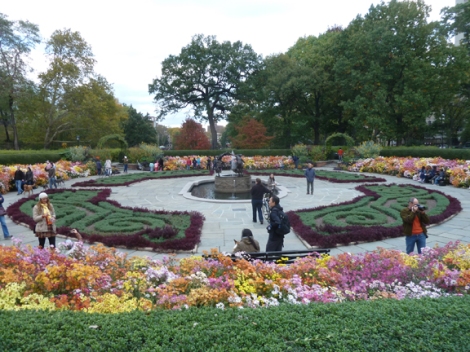 At the far northern end of Central Park can be found a peaceful patch of formal patterns made from plants and flowers. Located at Fifth Avenue and East 105th Street, Conservatory Garden is open daily from 8 AM until dusk. Designed to enchant and delight, it is the only formal garden in Central Park. Free from runners and bicyclists, the calm and quiet of the Garden offer an ideal spot for relaxing afternoon walks or the chance to sit on a bench and read a book. Opened in 1937, Conservatory Garden was designed by Gilmore D. Clarke (1892–1962). Explore the seldom-visited northern part of Central Park on a Walk About New York Speciality Tour.

“The Dancing Maidens” frolic at the center of the French Garden.

“It is a scientific fact that the occasional contemplation of natural scenes of an impressive character, particularly if this contemplation occurs in connection with relief from ordinary cares, change of air and change of habits, is favorable to the health and vigor of men beyond any other conditions that can be offered them.” —Frederick Law Olmsted

The flower beds of the French Garden.

The formal Conservatory Garden covers six acres. Within that space there are three separate gardens, each designed in a European style. The Italian Garden occupies the center; the French Garden is found to the north; and the English Garden lays in the southern part.

The flower beds follow the oval shape of the Garden.

“The enjoyment of scenery employs the mind without fatigue and yet exercises it, tranquilizes it and yet enlivens it; and thus, through the influence of the mind over the body, gives the effect of refreshing rest and reinvigoration of the whole system.”
—Fredrick Law Olmsted

Close-up to the flower beds of the French Garden.

The French Garden was decked out in its autumnal splendor of 2,000 Korean chrysanthemums. This sunken paradise is elliptical in shape and bordered by Japanese holly. At its center the lovely Three Dancing Maidens prance. This joyful fountain is the creation of German sculptor Walter Schott (1861–1938). 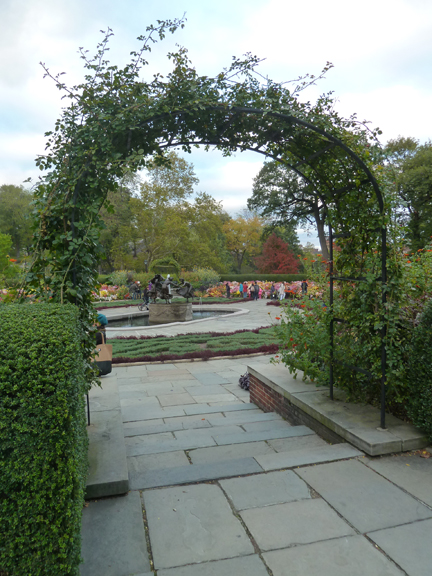 A vine-covered arch leads to the French Garden.

“And the secret garden bloomed and bloomed and every morning revealed new miracles.”
―from The Secret Garden by Frances Hodgson Burnett 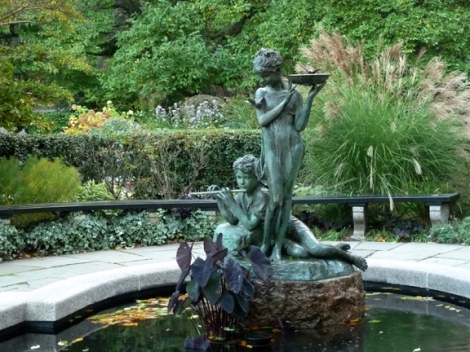 The lily pond of the English Garden.

The southern end of Conservatory Garden is designed in the English style. The Frances Hodgeson Burnett Memorial Fountain by sculptress Bessie Potter Vonnoh (1872–1955) can be found at the center of the English Garden; it is a charming a tribute to the author of The Secret Garden. The story’s main characters—Mary and Dickon—stand at one end of a small water lily pool.

Laughing amongst the chrysanthemums.

“If you look the right way, you can see that the whole world is a garden.” ―from The Secret Garden by Frances Hodgson Burnett

There are 2,000 Koren chrysanthemums planted in the French Garden.

Relaxing amongst the chrysanthemums.

One response to “Conservatory Garden: Awash with Autumnal Color”