“The fall of the Berlin Wall makes for nice pictures; but it all started in the shipyards.”
—Lech Walesa (1943– , former Polish prime minister) 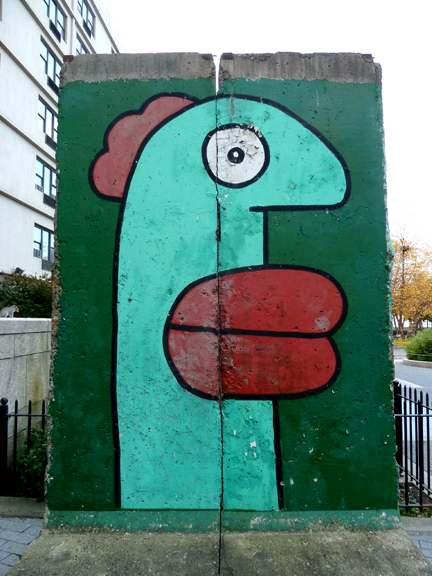 More than just a pretty face.

Mr. Walesa is referring to the Polish Solidarity Movement that he helped found in the shipyards of his hometown Gdańsk. The defiance by the shipbuilders of their Soviet overlords and their Polish puppets was the first rip in the Iron Curtain that ended with the crumbling of the Berlin Wall and the collapse of the Soviet Union. 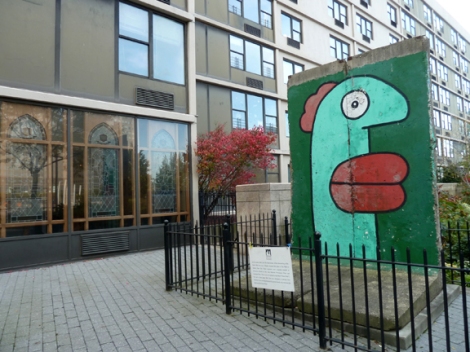 Fenced off: just as The Wall had done.

Twenty-five years ago today, November 9th 1989, East and West Germans rushed by the thousands to the Berlin Wall. Rebelling against 28 years of separation, they set about with great determination to destroy this concrete barrier to freedom. It crumbled under their hammers and chisels, and their wish for a whole city, a whole country, and a whole life.

These lips are sealed.

I spy with my little eye.

Until recently there were five locations in Manhattan displaying fragments of the Berlin Wall. The most prominent among them was the piece placed in Paley Park, a miniature urban space on East 53rd Street; because the fragment was vandalized, it was removed. There are other sections of the Berlin Wall in the Big Apple. There is one in the United Nations Garden, another outside the Intrepid Museum, one in Monsignor John J. Kowsky Plaza in Battery Park City and a fourth inside Ripley’s Believe It or Not in Times Square. 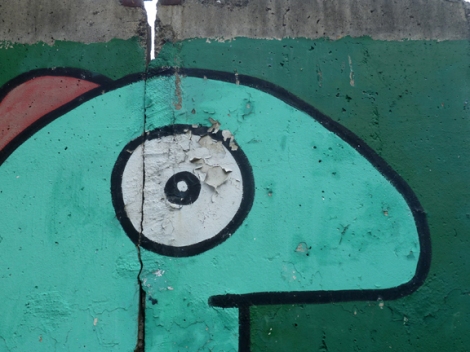 The Berlin Wall had extended for 66 miles and was more than 11 feet high; it had divided the city of Berlin from 1961 to 1989; and came to represent repression and isolation. The Wall, which had once divided a city, has itself been divided and scattered around the world. Over the past 25 years the symbol of Europe’s former political and ideological differences, the Wall, in fragments, has been given as gifts to museums, parks and libraries in cities around the world.

The Wall is at the end of a garden.

The city of Berlin gave two pieces of the Wall to Battery Park City, Manhattan’s newest neighborhood on its southwest edge. They were originally located in downtown Berlin, between Potsdamer Platz and Leipziger Platz. These two sections were not exposed to the West. Each one was part of what was known as the Inner Wall. It was constructed to prevent East Germans from entering the heavily guarded, deadly strip of land between the Inner and Outer Wall. 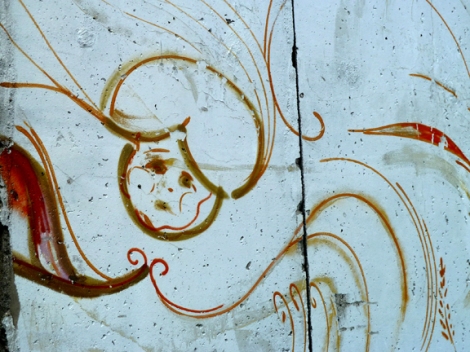 A small, sad green face stares from The Wall.

The gift was made to mark the 15th anniversary of the downfall of the Wall in 2004. Those fragments, standing back-to-back, now make their home in Kowsky Plaza, named for Monsignor John J. Kowsky (1922–1988), a former Roman Catholic chaplain for the New York Police Department.

The Wall stands next to St. Joseph’s Chapel, on the ground floor of an apartment house.

One section showcases the work of Thierry Noir (1958– ); the French artist had moved to West Berlin in 1982. He began to use the western side of the Berlin Wall as a canvas illegally painting the monolithic structure that separated the democratic West from the communist East. He was the first to paint on the wall; it was his effort, to, in his words, “demystify it.” Thierry’s large, simplistic and colorful “Big Heads,” which could be painted quickly under cover, were ideal subject matter for his clandestine art show. The 8’ x 12’ sections, weighing over 2 tons each, are the best to have survived in a recognizable way since the wall came down in 1989.

This side is sad; the other is comical.

The other section of the Wall in Kowsky Plaza stands in sharp artistic contrast to the bold graphics of Monsieur Noir. In wispy greens and reds, set against a stark white background, the images suggest a longing for freedom that was only a dream when they were painted. Each side shows a face; one sticks you with in-your-face defiance; the other expresses child-like innocence.

“The Berlin Wall was a mark of contradictions in the world, and it became a mark of radical changes in the world which touched the majority of humankind. But the way towards abolishing it was long and painful.”
—Mikhail Gorbachev (1931– , former Soviet president)