“On the Town” proudly displayed on the marquee at the Lyric Theater.

The current revival of On the Town at 42nd Street’s Lyric Theater brings a boatload of entertainment with it! This musical, which at its heart is a love affair with New York, is easy to fall in love with itself. This production came to life at the Barrington Stage Company in Pittsfield, MA in 2013. We are delighted that it did!

Just west of Times Square, the “On the Town” marquee faces 42nd St.

The singing and dancing and acting are excellent! Clever staging and period costumes with a modern touch give the show a fresh look and feel for the 21st century, while preserving the enthusiasm of its original era. You will have a fun night in the theater with this feel-good show; it has a happy beginning, middle and ending.

A huge, 48-star American flag greets audience members when they enter the auditorium. With the conductor on the podium, the orchestra leads the audience through the first chorus of The Star Spangled Banner, getting the patriotic sentiments percolating.

Greetings in the lobby of the Lyric Theater. 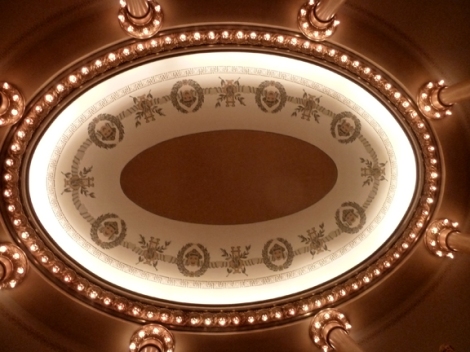 The oval ceiling details in the Lyric Theater’s lobby.

The musical’s venue, the Lyric Theater, was built in 1997 on the site of two theaters, the 1920 Apollo Theater and its namesake, the 1903 Lyric Theater. Both theaters had been condemned in early the 1990s after years of neglect and deterioration. Although its interior details reach to the past for their style and appearance, they are less than 20 years old. 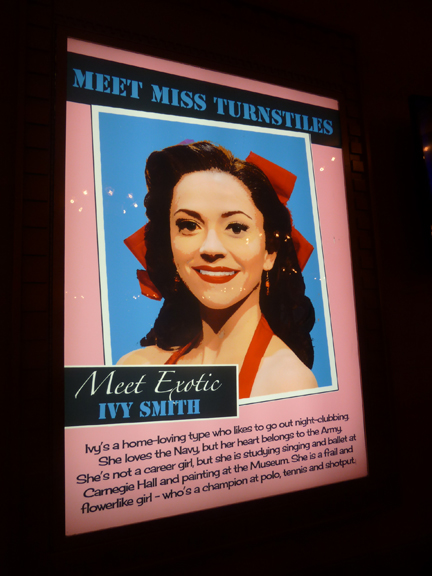 Many of us know On the Town from the 1949 MGM movie musical starring Gene Kelly and Frank Sinatra. That was based on the Broadway musical, first produced in 1944. That stage production grew out of a ballet, Fancy Free. This was a collaborative effort of Leonard Bernstein’s music and Jerome Robbins’ choreography. It was Mr. Robbins who had the original idea for the dance about three American sailors on a 24-hour shore leave in New York City. 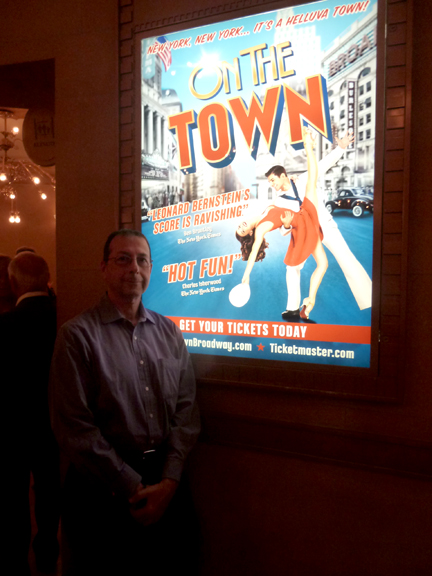 I am standing in the Lyric Theater’s lobby.

“Manhattan women are dressed in silk and satin,
Or so the fellas say;
There’s just one thing that’s important in Manhattan,
When you have just one day;
Gotta pick up a date …
Maybe seven …
Or eight
On your way.
In just one day!”
—from New York, New York, music by Leonard Bernstein, lyrics by Betty Comden and Alfred Green

Cast members get a standing ovation at the curtain call.

One response to ““On the Town” is a Boatload of Fun”