“What makes you think you’re such a superior human being? Your money? If you do, you’re a dull-witted fool, Mr. Kirby. And a poor one at that.”
—Grandpa Vanderhoff, from You Can’t Take It With You 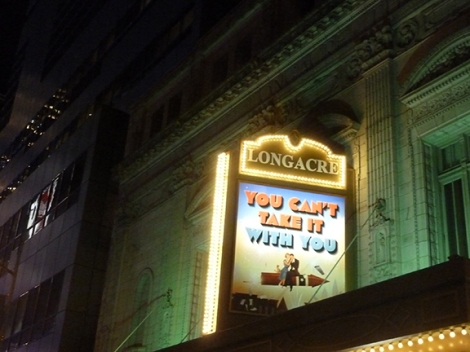 The marquee outside the Longacre Theater, 220 West 48th Street.

Since September of 2014 Broadway has been brightened with the zany antics of the Vanderhoff/Sycamore family and company in the endearing comedy, You Can’t Take It With You. Starring James Earl Jones, and featuring the comedic talents of Julie Halston and Elizabeth Ashley, this revival will be at the Longacre Theater through the end of February. Treat yourself: attend a performance. 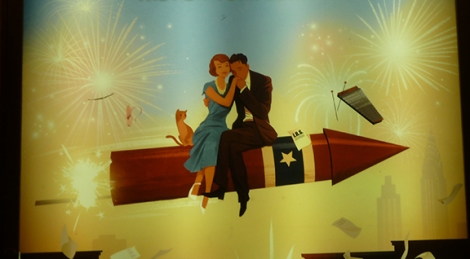 Fireworks and romance explode at “You Can’t Take It With You.”

How well the play’s message of living life to the fullest, working at what makes you happy and leaving worry aside applies to today’s high-pressured society. What you can’t take with you is money, needless to say. All the play’s characters make it clear that they do not need—nor do we—the amount of money (and what it buys) that others urge us to earn to be happy. This delightful play makes clear that today’s hot-button topices such as income inequality, the 1% vs. the 99% and the quest for satisfying life work are not particular to our time. However, we do need the very sort of jolt that You Can’t Take It With You gives us to reinforce these ideas. 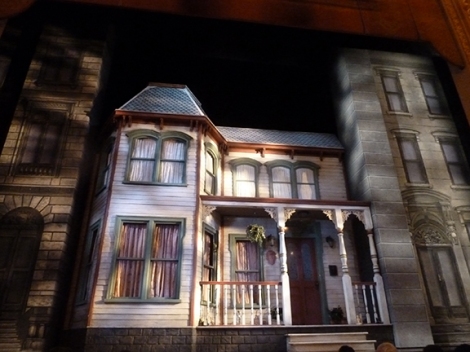 The stage set for “You Can’t Take it With You.”

Even the stage sets reenforces the idea that following one’s own path is the preferred one to take. All the play’s action takes place at the Vanderhoff home. The exterior of the house greets audience members when they enter the theater’s auditorium. Its comfortable, welcoming design contrasts sharply with its stiff, stone neighbors. Grandpa Vanderhoff is not about to conform to someone else’s style. 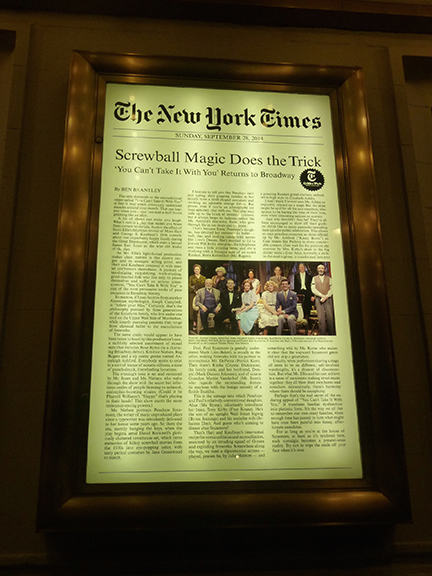 George S. Kaufman and Moss Hart’s three-act, comedic play You Can’t Take It With You made its Broadway premiere on the 14th of December 1936; it had a run of 838 performances. The play won the Pulitzer Prize for Drama in 1937. In August of the following year Columbia Pictures released Frank Capra’s film version, which won the Academy Award for Best Picture and Best Director. It starred James Stewart as Tony Kirby, Jean Arthur as Alice Sycamore and Lionel Barrymore, as Grandpa Vanderhoff. 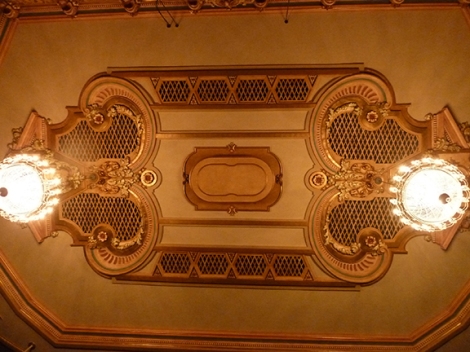 The ceiling at the Longacre Theater.

Now owned by the Shubert Organization, the Longacre Theater is named for Longacre Square, which we know as Times Square today. It was built in 1913 by producer/manager H.H. Frazee, better known as the owner of the Boston Red Sox. To raise needed cash for his theatrical enterprises, Mr. Frazee sold Babe Ruth’s contract to the New York Yankees. It was believed that a curse hung over the theater because of it. For years superstitious producers would not engage the theater, fearing their productions would flop.

“Well, Sir, here we are again. We’ve been getting along pretty good for quite a while now – we’re certainly much obliged. Remember all we ask is just to go along the way we are, keep our health; as far as anything else is concerned, we leave that up to you. Thank you.”
—Grandpa Vanderhoff, offering grace in
You Can’t Take It With You

One response to “From Another Era, a Message for Our Time”