“After people notice the tanks, they can’t believe how many there are.”
—Kenny Lewis, foreman at Rosenwach Tank Co.’s wood shop in Williamsburg, Brooklyn, the only one like it in the city

A look over rooftops in New York, with five water tanks in the distance.

Snow can make us look at the world around us differently. It highlights parts of our world we may not notice otherwise. While its white layer hides some things, it allows ordinary parts of the landscape, or cityscape in this case, to stand out. Here are photos of an iconic New York structure, whose conical hat is made more visible when covered in snow. 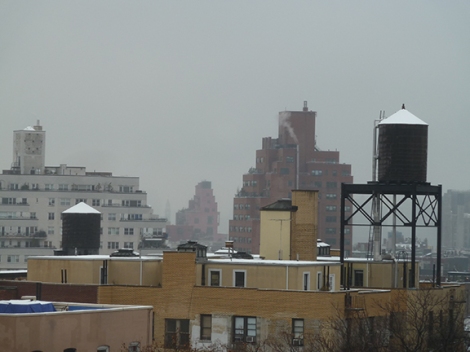 Two water tanks, one on stilts.

Squat and gray they stand at the very top of New York’s skyline, as round sentinels. With little change in their design for more than a 100 years, and seeming as if they are a relic from a bygone era, wooden water tanks continue to serve a vital function in the 21st century. The tanks are not antiques; in fact, every day we drink from and bathe with the water stored in them.

Snow on the side, as well as on the top of a water tank.

“When I tell people what I do for a living, they can’t believe it is still done.”
—Kenny Lewis, foreman at Rosenwach Tank Co.’s wood shop

Keeping company with a penthouse.

More than a curious fixture in the cityscape, they play an essential role, delivering water to the city’s citizens. They provide water for personal use and fire protection to 90 percent of the buildings taller than six stories. It is estimated that there are between 10,000 and 15,000 wooden tanks amongst the city’s five boroughs, each holding from 5,000 to 10,000 gallons of water until it is needed.

Side-by-side tanks, one twice as large as the other.

New York water tanks have been part of the city’s skyline since the mid-19th century. To avoid burst pipes at lower elevations, which could happen if pressure was increased for taller buildings, New York City mandated that all buildings more than six stories tall must be equipped with a rooftop water tank. The water in the upper portion of the tank is drawn from the top for everyday use; the water at the bottom of the tank is reserve for fire fighting. The tanks have become fashion symbols, too. In 2006 NYC’s trendy neighborhood of Tribeca, water towers have been required on all buildings, whether or not they are used!

Some buildings disguise their wooden water tanks behind elaborate or simple brick and stone housings. The one at 40 Fifth Avenue, a residential cooperative apartment house in The Village, is by far the best attempt to dress up the Plain Jane, gray tank at the top of its 17 stories. I always point out this decorative cloak to guests on the Greenwich Village Walking Tour. I contrast it with its more exposed cousin tanks seen on neighboring buildings.

The tanks work simply. Water is pumped into them and then gravity feeds it into buildings to maintain water pressure for drinking, bathroom, kitchen and laundry use, and standpipes, conduits that supply water for fighting fires. When water in the tank gets low, refilling it works much like a common toilet. A float valve in the tank signals the building’s basement pump to send water to the tank until it is full. 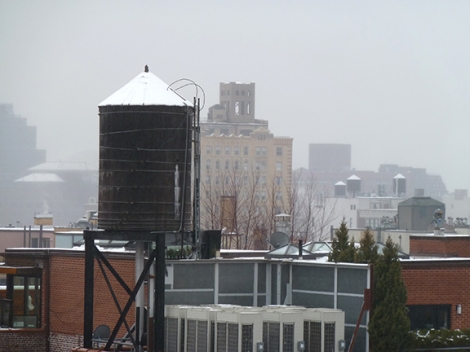 While many tanks are more than 30 years old, even new ones look old because they are made of wood that isn’t painted or chemically treated, so the drinking water is not contaminated. Although the technology has become more efficient, the concept of gravity delivering water from a wooden tank hasn’t changed for decades.

The snow highlights the conical tops to the tanks.

Two New York companies, Rosenwach Tank Company Inc. and Isseks Brothers Inc., build and maintain the city’s wooden water tanks. Both are family-run businesses, operating since the 1800s. Steel water tanks are an alternative; but those made of wood are the ones of choice because they can be easily put together and moved to rooftops in parts and cost less. Steel tanks are more expensive, and do not provide as much insulation, require more attention, and take longer to construct. The average wooden tank costs $30,000; a steel tank of the same size costs four times as much.

An exposed tank in the foreground, a concealed one in the distance.

Almost hidden amongst the jumble of brick and stone.

Eventually the wood will rot. This natural process has kept these two firms working at the same buildings for decades. A tank can remain in use for 30 to 35 years, depending on the weather conditions. Rooftop tanks on buildings of Manhattan’s West Side do not last as long as that because they take a beating, being near the Hudson River and its strong, moist winds. The Rosenwach Company estimates it has built and continues to service 10,000 tanks around the city; the company can build as many as 300 a year. Every year the natural sediment must be cleaned from the water off the bottom of the tank. With a crew of six men, an old tank can be torn down and new one built in 24 hours. It takes two to three hours to fill them. When the tanks are first built they leak, but when filled with water, the wood expands and the tank becomes watertight.

In an effort to call attention to the plight of millions around the world, who do not have access to clean water, The Water Tank Project is helping to transform the city’s wooden water tanks with art. Visit their website http://thewatertankproject.org/ for more details on this worthy project, and to see the tanks that have served as canvases look like now.

Water tanks, seen and not seen.

“When we look at the skyline, we can tell which tanks are ours because they have tan roof covers and signature ‘R’ on the top. I’m always amazed what a vast amount of skyline we cover in such a small field.”
—Andrew Rosenwach