“The thoughts of a ball awaken the joyful parts of our imagination. The ball holds out the prospect of something mysterious that may perhaps change your life.”
—Jacqueline, Countess de Ribes (1929– )

Until February 21, 2016 the Costume Institute at the Metropolitan Museum of Art has an exhibit of elegant as well as extravagant items from the personal wardrobe of Jacqueline, Countess de Ribes. Beginning in the 1950s this member of France’s nobility, both by birth and by marriage, became internationally recognized for her style, originality and grace. These qualities helped establish her as one of the leading fashion personalities of the 20th century.

This photo of the countess in profile greets visitors to the exhibit; it was taken by Richard Avadon in 1955. She was 26 years of age. 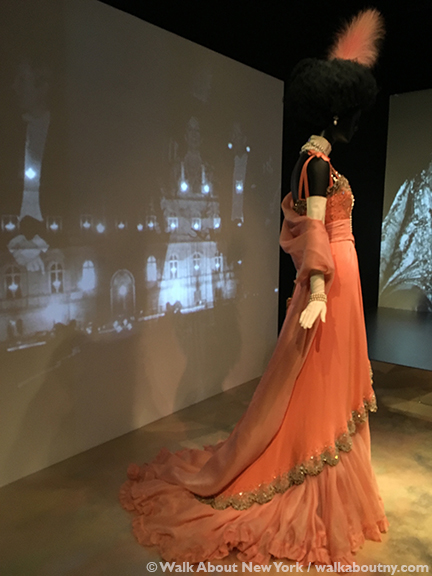 The show, titled “Jacqueline de Ribes: The Art of Style,” features sixty ensembles, both haute couture and ready-to-wear. Also on display are three outfits that she created to wear to high society costume balls. She concocted these fantasies by cutting and repurposing her own haute couture clothes. Photographs, video, and numerous magazine articles tell her remarkable story. You will learn how her interest in fashion evolved over the years, from her childhood fascination with her grandmother’s dress fittings, to the apex of international fashion, to founding her own design house.

Another dramatic photo of the countess greets guests before entering the exhibit.

Richard Avadon often photographed the countess, whom he said had the perfect nose; in this 1962 picture she is wearing a dress designed by Yves St. Laurent. 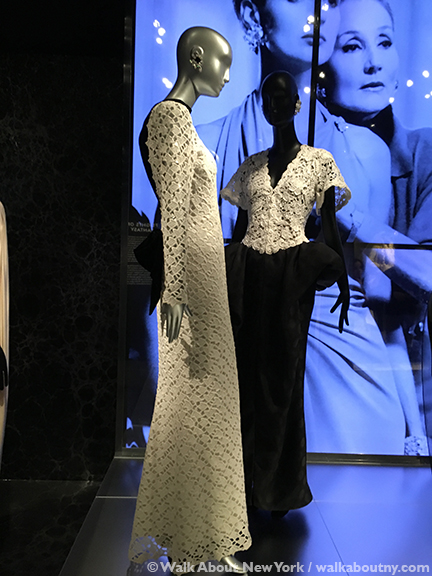 On the left, the white cotton guipure evening dress with a black silk/viscose band was the countess’ design in her spring/summer collection of 1986. She wore the dress to the opening of an exhibit of Faberge eggs belonging to Malcolm Forbes; the exhibit was held at Paris’ Musée Jacquemart-André . On the right, an evening dress made of white cotton guipure and black coin-dotted silk gazar; it is from the countess’ 1988 spring/summer collection.

On the right, an evening ensemble of white pleated silk crepe is the countess’ design from her 1990 spring/summer collection.

The countess served as inspiration to such haute couture designers as Yves St. Laurent, Valentino and Dior. These and other designers allowed her use of their drapers, cutters, and fitters to realize her own designs. This was their way to show their high regard for her taste and originality. From 1982 to 1995 she established and directed her own successful design business. The exhibition is not limited on her fashion sense. Her professional life included theatrical impresario, television producer, interior designer, and director and organizer of international charity events.

Among the countess’s favorites are a trio by Yves St. Laurent.

This trio of identically styled evening dresses differs only in their color. All are made of silk charmeuse. The blue dress dates from the 1981 spring/summer collection of Yves St. Laurent. The countess asked that the orange and the blue/green versions be made in 2000 before the designer closed his atelier.