Macy”s star was inspired by R.H. Macy’s tattoo he got working on a whaling ship in the 1830s.

Macy’s Thanksgiving Day Parade, originally called the Macy’s Christmas Parade, began in 1924. The first parade started at 145th Street and made its way to Macy’s Department Store on West 34th Street and Broadway, a distance of six miles; but the actually parade stretched only two blocks!

The AFLAC duck waited in line.

Today’s parade begins at West 77th Street and Central Park West. This is also the staging area for the balloons, where they are inflated. And they are inflated, not blown-up. Vehicles and other things are blown-up in James Bond movies, not Macy’s Thanksgiving Day Parade balloons! The first balloons appeared in 1927. The balloons are inflated with helium. Macy’s is the second-largest consumer of helium in the world; the U.S. government is the first. 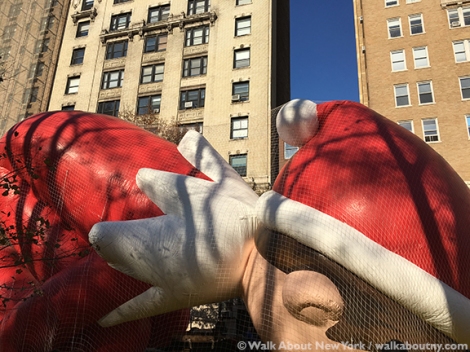 Elf on the Shelf is Elf on the Gorund, face down!

Labels for all the balloons stand at the street curb.

Dino the Dinosaur, symbol of the Sinclair Oil Corporation, returns to the 89th Macy’s Thanksgiving Day Parade. The 77-foot long balloon giant first appeared in the 1963 parade. This is the first time Dino (pronounced dye-no) has flown since 1976. Dino is a Brontosaurus. He was first seen in Chicago at the 1933-1934 “Century of Progress” World’s Fair. He re-surfaced at the Texas Centennial Exposition of 1936; and helped attract visitors to the dinosaur exhibition, the “Dinoland Pavilion,” during the 1939–1940 and 1964–1965 World’s Fairs, both in New York. His return to the parade celebrates the company’s 100-year anniversary in 2016.

It is all smiles and hello waves from the Kool-Aid Man.

If it was real, this pitcher is big enough to hold more than 1.3 million cups of the original cherry-flavored Kool-Aid drink! This year marks the Kool-Aid Man’s sixth appearance. The balloons were originally manufactured by Goodyear Tire and Rubber Company in Akron, Ohio. Today, Raven Aerostar of Sioux Falls, South Dakota makes them. 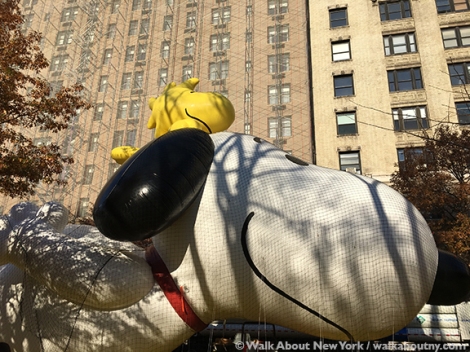 Snoopy and his trusty friend, Woodstock are held down by netting.

Snoopy, with Woodstock perched on his head, measures 67 feet long, 27 feet wide and 38 feet tall. Snoopy holds the record for the most appearances in the Macy’s Thanksgiving Day Parade. He first went airborne in 1968. This year marks his 39th trip through the streets of Manhattan. The present version is the seventh incarnation of the adorable beagle, first appearing only two years ago. 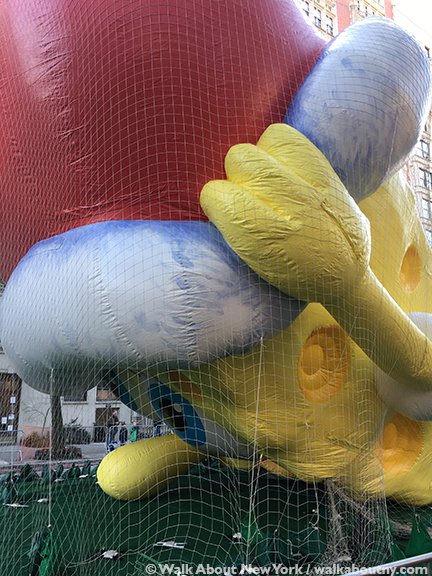 SpongeBob SquarePants is ready for his close-up in his Santa hat.

This is the second balloon for SpongeBob SquarePants. He dons a bright red Santa cap. The parade was first broadcast on New York local TV in 1946; it went national on NBC the following year. Balloons average three to five stories tall. When balloons first appeared, they were released at the parade’s end. A reward of $50 was offered to whomever returned one after it fell to earth. 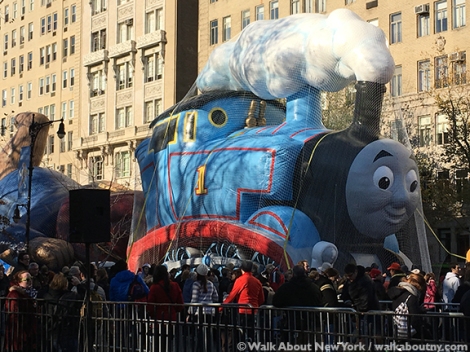 This will the second appearance for the world’s most famous steam engine, Thomas the Tank Engine. With dimensions of 51 feet long, 23 feet wide and 47 feet tall, each of Thomas’ 6 wheels is bigger than a baseball pitcher’s mound. He is the among the characters in the series of books titled The Railway Series, written by the Reverend Wilbert Awdry, and later by his son, Christopher Awdry. Thomas is the central character on the TV show, Thomas & Friends.

Admission to the inflation area is free and open to the public. The best and least-crowded time to view the balloons is the early afternoon. The streets, West 77th and West 81st Streets, running west from Central Park, border the grounds of the American Museum of Natural History. Learn more about the Park, the greatest urban oasis in the world, during our Central Park Walking Tour.