“The whole thing ended up in court, and the court decided well, yes, the Constitution says that people have the right to peacefully assemble and the state can’t take that right away from you. And so the Liquor Authority can’t prevent gay people from congregating in bars.”
— Dick Leitsch, former Chairman of the New York chapter of the Mattachine Society, and a participant in the Julius’ Sip-In, from a 2008 NPR interview 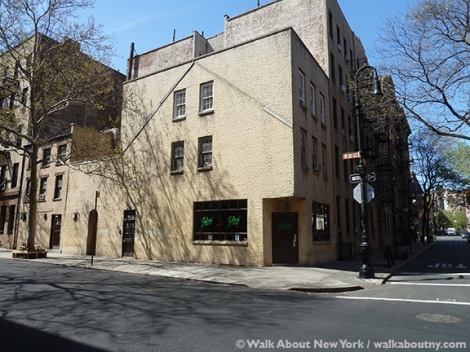 The unremarkable, light yellow-colored, two-story, stucco-covered building at the corner of West 10th Street and Waverly Place dates from 1826. It has housed a bar since 1864, making it one of the oldest, continuously operated watering holes in New York City. From the Civil War era until 1933, it was called the Seven Doors, and was a popular speakeasy during the 1920s; the side door with a peephole still can be used to enter and exit. The ground-floor establishment has been known as Julius’ since the repeal of Prohibition in 1933. Legend tells us that Fats Waller played the piano, and Billie Holiday sang here. The bar’s name came from owner’s dog, a Basset Hound. Julius’ has the distinction of being one of the oldest gay bars in both the city and country. Notable gay patrons have included writer Edmond White, dramatist Edward Albee, ballet dancer Rudolf Nureyev, playwright Tennessee Williams, author Truman Capote.

The building, with two addresses, 159 West 10th Street and 188 Waverly Place, falls within the 1969 Greenwich Village Historic District; therefore the exterior cannot be altered. Because of a quiet but historic protest for civil rights, Julius’ deserves individual landmark status by the New York City Landmarks Preservation Commission. Today, April 21st is the 50th anniversary of what was called a Sip-In at Julius’ Bar. The name for this first-ever coordinated act of civil disobedience by gays for their rights was based on the popular protest actions of the 1960s called “ins.” There were sit-ins and be-ins; Yoko Ono and John Lennon even held a “bed-in” for peace.

One of America’s first gay rights organizations, the Mattachine Society, believed by 1966 it was time to challenge the New York State Liquor Authority regulations that allowed bars to refuse service to gays, or to be closed for selling them a drink. The law stated that disorderly persons could not be served alcohol; and gays were thought disorderly by their very nature. Also, same-sex kissing, dancing and hand holding were forbidden in bars by the same law. Some bars posted signs in the window that read, “If you’re gay, go away.” Those bars that had been raided, would have a sign in the window saying, “This is a raided premises.” Often a uniformed cop would be assigned to the bar, sitting on the stool inside the establishment’s door, until the trial was held. Julius’ was one such bar, having been raided 10 days before three gay men stood up for everyone’s rights by sitting down at a bar and ordering a drink.

Celebrating the Golden Anniversary of The Sip-In.

On April 21, 1966, three years and two months before the Stonewall Rebellion just around the corner on Christopher Street, these activists went to Julius’, a popular bar on the gay nightlife scene of the 1960s. As at other gay bars of the era, a certain amount of secrecy had to be practiced by its patrons, or the bar risked being shut down. The three men, dressed in jacket and tie, would have no more hiding. When they sat down at the bar, the bartender set glasses before. They identified themselves as homosexuals; pointed out that they were orderly; and the protestors ordered a drink. 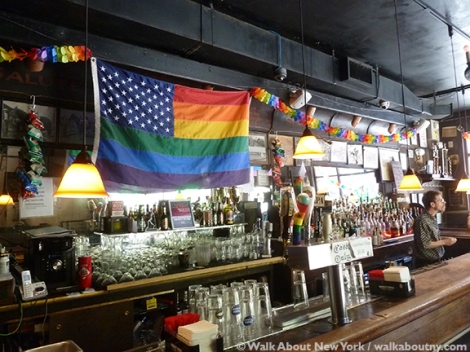 Julius’ bar with its rainbow flag and bunting.

When the bartender heard what they said, he refused to serve the men, using his hand to cover the glasses he had set in front of them. The New York Times published a short piece about the Sip-In; there is a photo (not run with the article) by NY Times photographer Fred W. McDarrah of the bartender covering the glasses. The headline for the news item read, “3 Deviates Invite Exclusion By Bars.” 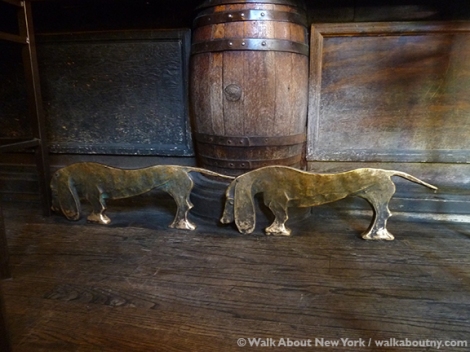 “We are homosexuals. We are orderly, we intend to remain orderly, and we are asking for service.”
— the carefully-worded declaration recited by the three Mattachine Society members at Julius’, April 21, 1966 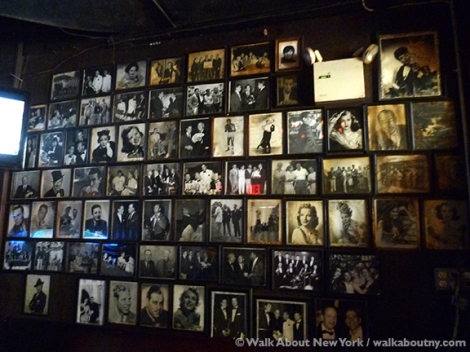 The Mattachine Society took the New York State Liquor Authority and Julius’ to court. The year after the Sip-In, 1967 a New York State Court decision struck down the laws that could shut down a bar simply for serving gay people. Make no mistake about it. This was a United States Constitutional issue. As Mr. Leitsch points out in the opening quote, the Constitution guarantees “the right of the people peaceably to assemble.” The Sip-In and the resultant legal action struck down a useless law; it paved the way for gay people to enjoy freedom from abuse and harassment in New York, across the country and around the world.

Recently during our Gay Village Walking Tour, where Julius’ is a noted stop, a Tour guest wondered why he had never heard of this important piece of gay history. Take the Tour; learn more! 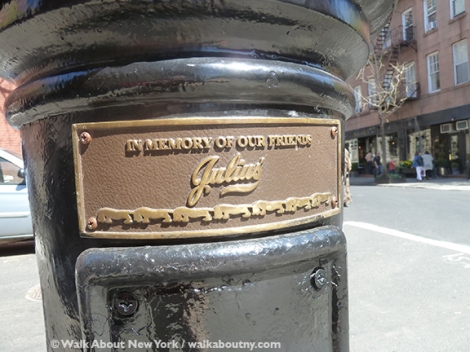 Julius’ Basset Hounds honor its patrons who have died of AIDS on a lamppost outside.