The Veteran Corps “commemorated the memory of their comrades who fell in the Civil War with appropriate exercises… The monument was almost hidden from sight by wreaths and flowers, as was the ground at its foot.”
—from The New York Sun, May 31, 1895, on that year’s Memorial Day ceremony at the Seventh Regiment Memorial 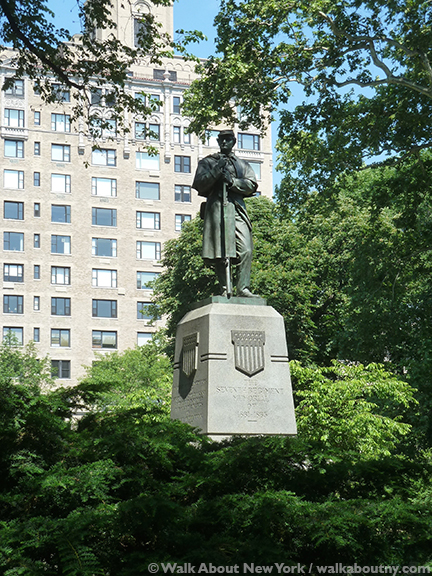 As time goes by veterans of bygone wars and ordinary citizens die; for those still living, their memories grow dim. Members of contemporary society see such memorials in the best light as quaint reminders of a distant past; and at worst, they are seen as irrelevant to the lives of present-day Americans. In contrast to the Memorial Day of 1895, 2015’s, when the photos shown here were snapped, had no such wealth of wreaths and flowers obscured the monument, nor the ground around it. It was a quiet day for the lushly-situated memorial to the 58 fallen, Civil War-era soldiers from the Seventh Regiment of the New York National Guard.

“For the Homeland and Glory” one of four medallions at the base of “The Citizen Soldier.”

The inscriptions on the base of “The Citizen Soldier.”

The monument became an annual pilgrimage site for veterans on Memorial Day; but by 1923, when it was rededicated, it had become a mere curiosity rather than a revered memorial. After the heroically-scaled monument to the Seventh Regiment’s efforts in the First World War was dedicated in 1927, John Quincy Adams Ward’s quiet, 19th-century tribute appeared insignificant by comparison.

Some of the medallions at the base of were stolen in the summer of 1882. 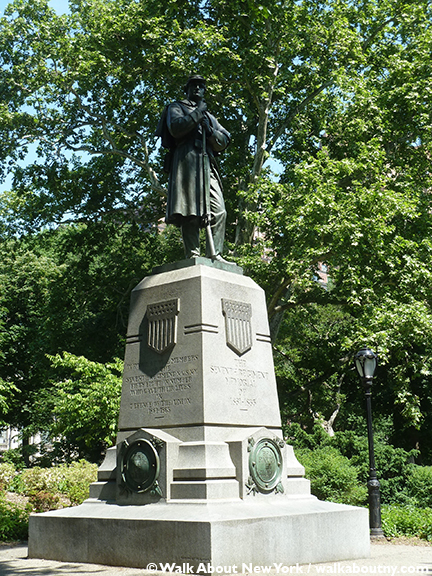 In 1923 all four medallions were stolen. The bronze is valuable for resale.

Only one year after New Yorkers welcomed home members of what was known as ‘The Silk Stocking Regiment’ from the War Between the States, the Monumental Association had been formed. Its mission was to erect a memorial in memory of those members who had answered President Lincoln’s call and had given their lives to preserve the Union. In 1867 the Seventh Regiment petitioned the city for permission to erect their memorial in Central Park. 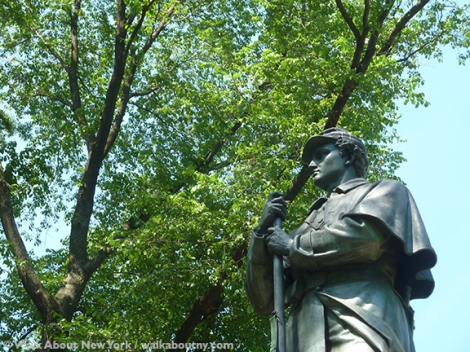 The monument originally was slated to stand at Central Park North and Seventh Avenue.

The man who would come to known as the “dean of American sculptors,” John Quincy Adams Ward (1830–1911) was commissioned to create a fitting tribute. Architect Richard Morris Hunt (1827–1895) designed the base of Barre granite. During the Victorian era it was common practice for military heroes, in grand formal poses, to be honored with a bronze or marble likeness. Mr. Ward took a different approach. He chose a humble foot soldier to represent the 58 fallen members of the Seventh Regiment.

The cost of the bronze figure and the granite pedestal was $50,000.

The young sentry vigilantly looks off in the distance as he leans on his rifle. This Every Man, posed in what is called parade rest, went on to appear in various forms as Civil War monuments in town squares, parks and cemeteries around the United States.

Officers and members of the Seventh Regiment funded the memorial.

Located on the Park’s West Drive at West 67th Street, and titled “The Citizen Soldier,” the memorial was dedicated on June 22, 1874. The figure may look ordinary; but it was the first of its kind. This war memorial represented not a military leader, but a citizen soldier. Not every town had a Civil War general, but every one had sacrificed fathers, husbands, sons and brothers. The Seventh Regiment’s Civil War veterans and its current members paraded separately to Central Park, meeting at Eighth Avenue and West 69th Street, where they entered the Park. The Seventh Regiment Band played; grandstands had been erected for military and civic guests. 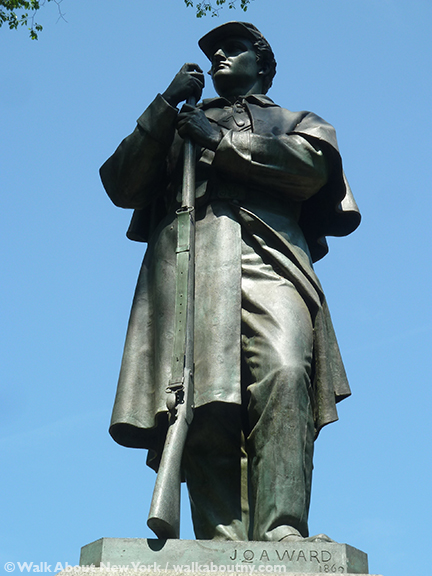 “There was never seen at the Central Park at any time since it has become one of our great public resorts, such an immense crowd as was gathered there yesterday afternoon to witness the unveiling of the memorial statue of the Seventh Regiment.”
—from the June 23, 1874 edition of the New York Herald

The sculptor’s initials and last name are clearly etched on the base.

The Seventh Regiment’s roots stretch back to 1807 after the British fired upon American vessels off Sandy Hook, New Jersey in April 1806; the Regiment would go on to take part in the War of 1812. Its response to the Astor Place Riots of 1849 was a turning point in the membership of this all-volunteer unit. When 20,000 working-class demonstrators threatened the tony residential neighborhood around the Astor Place Opera House, the Seventh Regiment came to the rescue. The upper-class residents would not forget their heroes; the city’s wealthiest and most prominent families showed their gratitude for decades to come by sending their sons to fill the ranks of the Regiment. This resulted in the group’s popular nicknames,
“The Silk Stocking Regiment” and “The Dandy Seventh.”

Above the soldier’s pouch, embossed with “NG” for National Guard, is a bird’s nest!

Discover many sights in Central Park, the greatest urban oasis in the world, including the “Citizen Soldier,” when you are part of our Central Park Walking Tour. Take the Tour; Know More!