“If the new Majestic is in existence after 1981, it will be somewhat of an architectural curiosity.”
— Irwin S. Chanin (1891–1988), developer of The Majestic, and his unrealized prediction in The New York Times, 1931 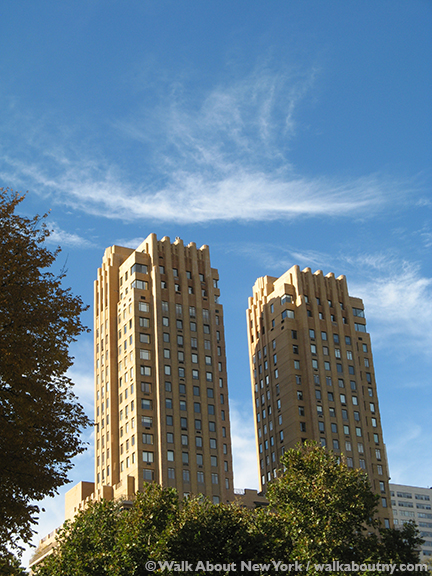 Not only was The Majestic still standing in 1981, so was Mr. Chanin! The Majestic is one of four twin-towered skyscraper apartment buildings which have come to symbolize the skyline of the street where they are located, Central Park West. After attending 1925’s groundbreaking L’Exposition internationale des arts décoratifs et industriels modernes, Mr. Chanin returned as a enthusiast for the style moderne. The Majestic was to be his first effort using the elements of what came to be known as the Art Deco style for a residential building. Erected between 1930 and 1931 by the Chanin Construction Company, which was headed by Mr. Chanin, The Majestic is an outstanding example of the architectural use of the Art Deco style in its most pared-down and geometric form.

Sign on the West 72nd Street side of the Majestic Apartment building.

The Majestic’s main address is 115 Central Park West, between West 71st and West 72nd Streets; across West 72nd Street is The Dakota, where John Lennon lived and where he was shot dead. Opened as a rental apartment house in 1931, The Majestic has been under cooperative ownership since 1958. The building is named for an 11-story residency hotel, called the Majestic, which had been built on the same block front between 71st to 72nd Streets, facing Central Park West, in 1894. The hotel had been home to Austrian composer Gustav Mahler and American novelist Edna Ferber.

The bump-outs, ribbing, and crenelations emphasize the towers’ height.

The apartment building was designated a New York City landmark in 1988. The building is a significant factor why Central Park West has been named a New York City Historic District, and for why the United States Department of the Interior listed the street as part of the U.S. National Register of Historic Places on November 9, 1982.

A close-up of The Majestic’s brick and terracotta façade.

Central Park West, the northern continuation of Eight Avenue skirting Central Park, is today one of New York’s finest residential streets. The Majestic successfully responded to the city’s new building restrictions with its new style; its twin towers are an answer to regulations, enacted in 1929, that limited the number of stories at a building’s street level, but allowed for twin towers. Although constructed at the beginning of the Great Depression, this Spartanly designed apartment house truly belongs in the class of luxury apartment buildings developed in the 1920s. The Majestic’s signature feature is its limited use of decoration and its simple materials. The austere appearance is an integral part of the building’s appeal; but it resulted from the era’s economic reality. 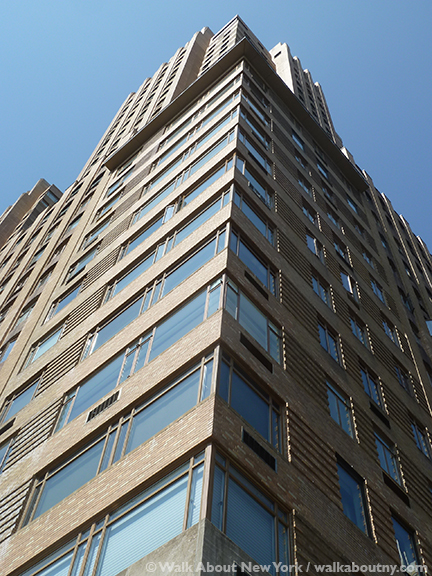 The Majestic’s wrap-around corner windows were novel in 1930.

The Majestic, along with the Century a few blocks south on Central Park West, were meant to redefine how the affluent could live. The steel-framed building was originally designed to be a 45-story hotel with an opulent exterior of sleek lines, dramatic corner windows, and the twin towers topped with abstract sculpture. The interior, on the other hand, was planned to have lavish Old World-style apartments, make up of eleven to twenty-four room. 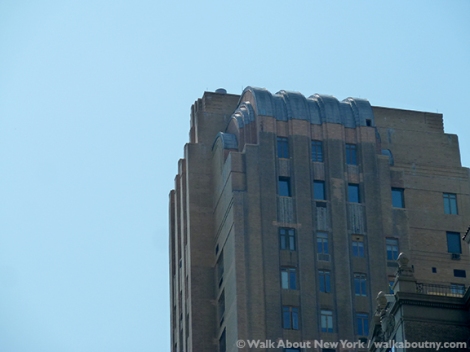 This is a good view of the north tower’s rear curved detailing.

After the stock market crashed on October 29, 1929, altered fortunes dictated a change in style. All this happened in what seemed like an instant. No clearer example could there be of the sobering up than The Majestic. Its steel pilings of had been partially put in place when Chanin and his architect Jacques Delamarre (1906–1986) reworked their plan. The single tower became two; and they came up with an assortment of smaller, less opulent three to eleven room units. Recently developed construction methods were used for the building. A new type of concrete construction eliminated the need for dropped-beam ceilings. Cantilevered floor slabs did away with the need for corner columns; this allowed wrap around windows and wider terraces to be part of the design. 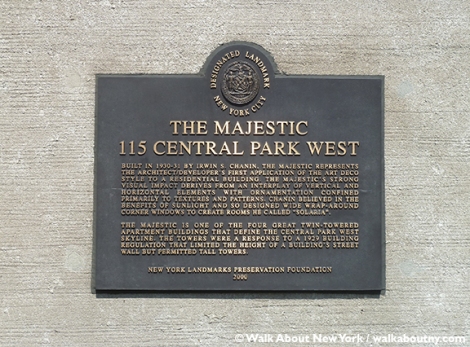 The plaque on the Central Park West façade notes that the building is a NYC landmark.

Mr. Chanin, whose eponymous office tower, the Chanin Building is at 122 East 42nd Street between Park and Lexington Avenues, developed both The Majestic Apartments, and The Century Apartments. Unlike The Century, The Majestic has a limestone base, with the upper facade clad in brown and tan colored brick. René Chambellan (1893–1955), who worked on Mr. Chanin’s namesake Midtown building, designed the brickwork of The Majestic’s façade. 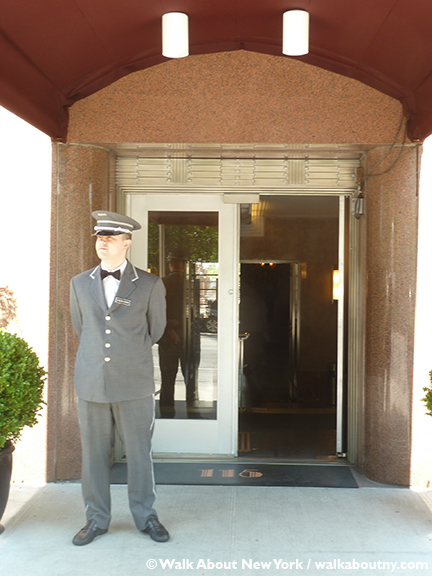 The Majestic is a full-service building with a 24-hour doorman and maintenance staff.

The Central Park-facing, eastern side of the towers has rib-like protrusions that extend to the top of the form, where there are gold-leafed crenellations. On the western, city-facing side, the towers have identical curved tops that are clad in a contrasting material. This gives them the appearance of a modern dynamo directly out of Fritz Lang’s Metropolis. The building has 238 apartments spread out over 29 stories.

This side view of the north tower shows off the outstanding geometric Art Deco details.

Some of the well-known residents at The Majestic have been comic actors Milton Berle and Zero Mostel, and newspaper columnist and radio commentator Walter Winchell. Song-and-dance man Fred Astaire lived there too. In the 1980s fashion designer Marc Jacobs, while in his teens, lived at The Majestic with his grandmother. Late-night talk show host Conan O’Brien sold his co-op there in the summer of 2010 for $25 million. It was one of the highest prices sales for a New York City apartment that year.

The Majestic is #8 at its West 72nd entrance, and #115 at its Central Park West entrance.

The Majestic was home to members of the Luciano crime family, including Lucky Luciano and Meyer Lansky. Louis “Lepke” Buchalter, Meyer Lansky and Lucky Luciano lived in apartment #17J in 1933. Frank Costello and his wife, Loretta Geigerman, rented apartment #18F for $3,900 a month. This nine-room, corner apartment has two bedroom and two bathroom, and faces Central Park. It sold in 2014 for $5,304,000. In a failed hit Vincent “The Chin” Gigante shot Frank Costello in The Majestic’s lobby in 1957.

Details of the towers’ parapets appear to be gilded.

Get to see all four twin-towered apartment buildings along Central Park West—and much more—when you are part of our Central Park Walking Tour: it is good fun and greater value! 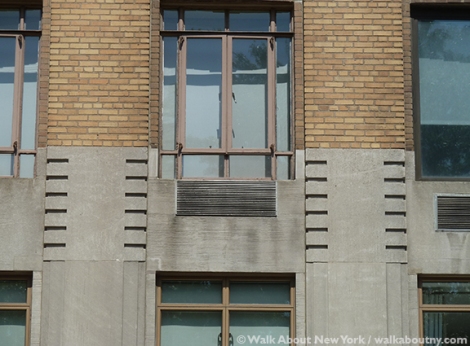 Horizontal detailing to the building’s limestone base runs counter to its height.