“The announcement yesterday that Mr. Frick’s almost unrivalled art treasures were to pass to the city came as a surprise to all save a few of his intimate friends.”
—from the New York Sun, December 3, 1919

The Fifth Avenue façade of The Frick Collection.

Not exactly “to the city” had Henry Clay Frick (1849–1919) bequeathed his art collection, which was accumulated over a period of forty years, and the building that housed it; but they would be accessible to the public after the death of his wife, Adelaide Childs. Located at One East 70th Street, at Fifth Avenue, the former residence of the couple still houses the Frick Collection and the Frick Art Reference Library. The house is a treasured jewel box!

The entry to The Frick Collection is at One East 70th Street.

Mr. Frick’s understated, elegant new Fifth Avenue home drew interest, and criticism from as far away as El Paso, Texas.
“With princely disregard for the value of Fifth avenue real estate, Mr. Frick sets the front of his mansion seventy-five feet back from the avenue. Men who are wise in New York real estate matters express the opinion that never again will it be possible to secure a whole block of frontage on Fifth avenue for private residence purposes. Indeed, the new Frick mansion is likely to be the last on Manhattan Island to cover anything like so spacious an area.”
—from the El Paso Herald, November 16, 1913 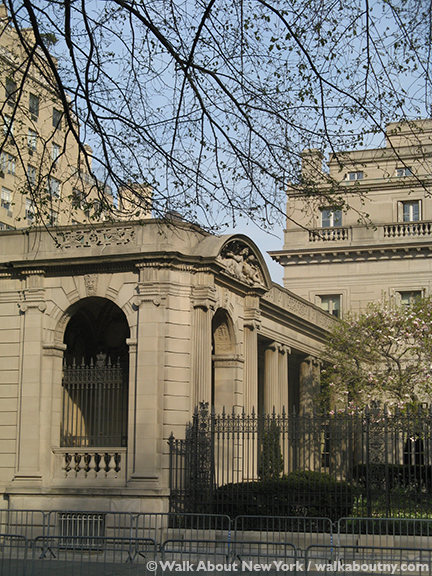 The northern colonnade is now enclosed, used for display.

The New York architectural firm of Carrère and Hastings designed the house; it was built between 1913 and 1914, at a cost of $5,000,000. The land the house sits on, the width of the entire block from East 70th Street to East 71st Street facing Fifth Avenue, cost two million dollars. Mr. Frick’s intention had always been to leave his house and his art collection to the public. To this end, the design of the house was purposely planned to accommodate the paintings, drawings, prints, sculptures, furnishings and other art objects.

The keystone to an arch in northern colonnade takes the form of a saytar.

Mr. Frick changed the arrangement of rooms in his house as he acquired new works. One example that changed the house in a major way involves series of 18th-century interior room elements. Beginning in 1772 the French artist Jean-Honoré Frangonard (1732–1806) painted a series of architectural panels for Madam du Barry, mistress of Louis XV, king of France. She was not pleased with the results, and rejected them. Monsieur Fragonard kept them. Eventually J. P. Morgan (1837–1913) bought the panels in 1902 for $400,000; he installed in his London home. Following Mr. Morgan’s death, the panels were purchased by the art dealers to the Gilded Age Robber Barons, the Duveen Brothers for $1.2 million. They were packed off to New York, where they were exhibited at the Metropolitan Museum of Art. Mr. Frick greatly admired them. So much so that he instructed his architects to change plans, and design a room to accommodate them. He paid $1.5 million for the 14 panels, titled The Progress of Love. Other alterations were made after Mr. Frick’s death when needed; the only exception is the Living Hall, which has remained unchanged for more than 100 years.

The southwest corner of the Fragonard Room, courtesy The Frick Collection.

“The public has had its last look at the Fragonard panels which formed part of the vast art collection of the late J. Pierpont Morgan. To-day they will be taken from the Metropolitan Museum of Art to the galleries in the residence of Henry C. Frick, at Fifth Avenue and Seventieth Street. The center of interest for the huge throng of visitors that flocked to the museum yesterday was the separate room in the walls of which were set the panels that will hereafter delight the eyes of only Mr. Frick and his guests.”
—from the New-York Tribune, March 15, 1915 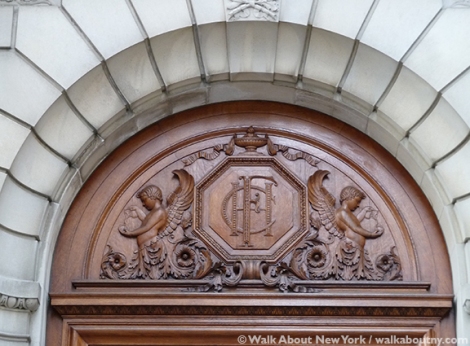 Designed in a style resembling eighteenth century European domestic architecture, the house museum’s entrance is on East 70th Street. With an endowment of $15 million left by Mr. Frick in his will, almost a third of the paintings were acquired after his death, many purchases were overseen by the Fricks’ daughter Helen Clay Frick (1888–1984), who advised her father during his lifetime. 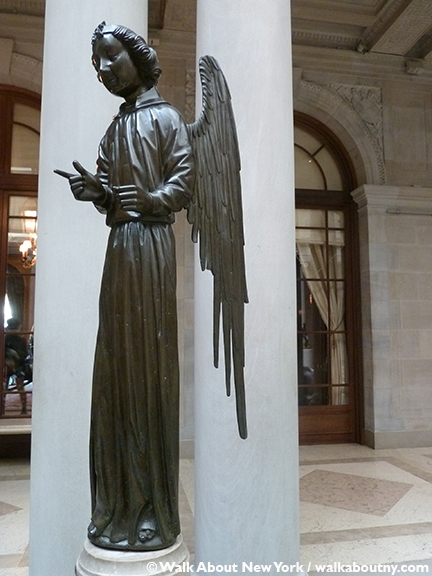 The 15th-century “Angel” is in the Court Garden.

One of those posthumous acquisitions was 1475’s Angel cast by Jean Barbet (active 1475−d. 1514) This 44.5-inch bronze stands in the Garden Court, and was purchased by The Frick Collection in 1943. Coming from Lyon, France, the column-like Angel was cast in one piece, except for the huge wings, by Barbet, who made cannons for a living. The enormous wings, with fine feathering detail, are attached to the back by pins. The artist and the original purpose of Angel are not known; some have speculated that it was a weather vane; part of an altar or a fountain have also been suggested. 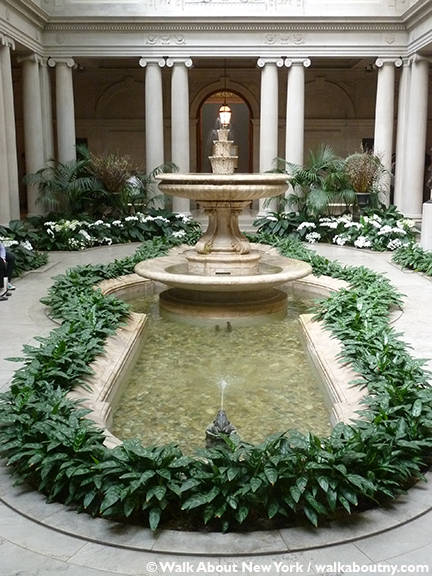 A fountain, pool and flowers make the Court Garden a quiet spot.

“The picture gallery will be the chief feature. It will be one of the largest in the city. Mr. Frick is taking more pride in the arrangement of the gallery than in any other part of his new mansion. It will contain some of the most valuable and famous paintings in the world, including not only works of enormous intrinsic value, but famous paintings in the art literature of the world.”
—from a New York Times article in advance of the completion of Henry Clay Frick’s Fifth Avenue home in 1914 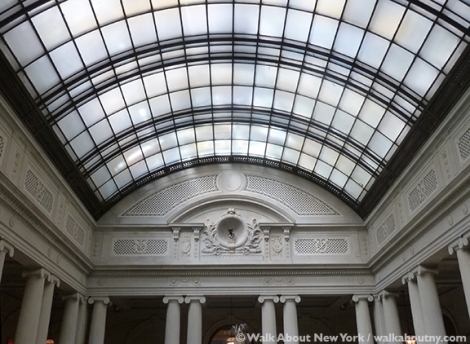 The Court Garden’s skylight brings daylight to the area.

Mr. Frick stipulated in his will that Mrs. Frick had use of the house for her lifetime. After her death in 1931, at the age of 71, the Frick Collection’s trustees commissioned John Russell Pope, architect of Washington, D.C.’s Jefferson Memorial and the National Gallery of Art, to turn the house into a museum. Mr. Pope added two galleries, the Oval Room and East Gallery; a combination lecture hall and music room, and the enclosed Garden Court. Following the $1 million renovation the museum opened to the public in December 1935. 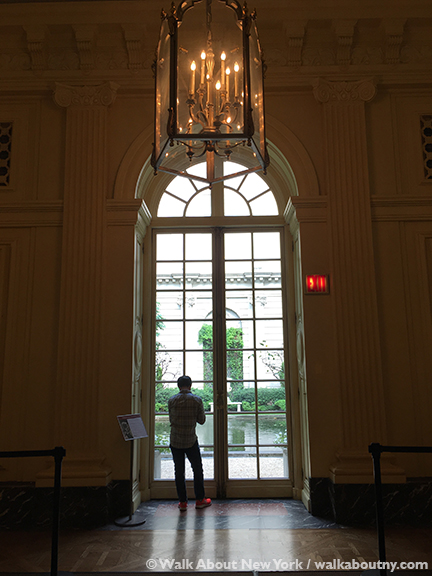 One of three doors facing the garden, added in 1977.

In 1977 a garden on East 70th Street to the east of the museum was designed by Russell Page; it can be seen from the street and from the pavilion, which was added the same year to handle increasing attendance. Two lower-level galleries were opened beneath the pavilion to showcase temporary exhibitions.

One of three massive light fixtures in the ticketing/coat check area.

It was in the lower-level galleries where we enjoyed part of the recent exhibition put on by the Frick Collection, “Van Dyck: The Anatomy of Portraiture;” it ended on June 5th. It was wonderful! It is usually smaller works, prints and drawings that are exhibited here. We were surprised to learn that the Frick Collection owns eight of Van Dyck’s portraits; these and others were shown on the main floor. 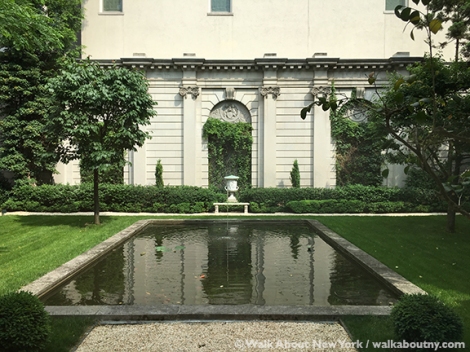 The Frick Collection’s private garden on East 71st Street. It is not open to the public.

You can include the Frick Collection, which no one should miss, as part of your next Specialty Tour that can be designed especially for you, and family and friends. Contact Walk About New York for details.

How quaint: a telephone booth is found in the area leading to the basement restrooms.