“It all goes back to the first moment of the first flag back in 1978 for me. Raising it up and seeing it there blowing in the wind for everyone to see. It completely astounded me that people just got it, in an instant like a bolt of lightening – that this was their flag. It belonged to all of us. It was the most thrilling moment of my life. Because I knew right then that this was the most important thing I would ever do – that my whole life was going to be about the Rainbow Flag.”
—Gilbert Baker, designer of the Rainbow Flag

Many Rainbow Flags fly outside the Stonewall Inn.

The Rainbow Flag has become a worldwide symbol of gay pride. The days leading up to, and during Gay Pride parades it is seen everywhere. To celebrate the 25th anniversary of the Stonewall Riots in 1994 Mr. Baker created the mile-long Rainbow Flag that was carried down New York’s Fifth Avenue in the annual Gay Pride Parade. The Guinness Book of World Records recognized this mile-long Rainbow Flag as the world’s largest flag. The multi-striped, multi-colored pattern is now not limited to flags, but appears on key chains, t-shirts, coffee mugs, and wherever gay pride can be shown. 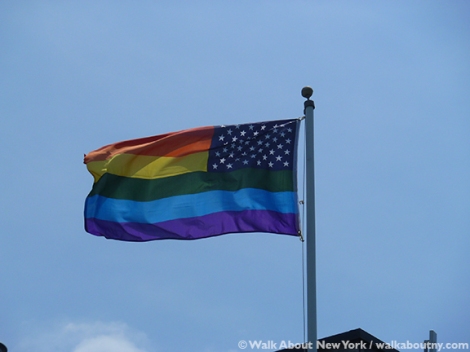 Variation of a theme: the U.S. stars combined with the rainbow stripes.

Gilbert Baker, a San Francisco artist, designed the first Rainbow Flag in 1978. He had been challenged to create the flag by Harvey Milk, the first openly gay man elected to public office in a major American city. Mr. Milk believed there was a need for a gay community symbol, something other than the pink triangle, which had been used by the Nazis to label and identify homosexuals in the Third Reich. In the 1970s the pink triangle had been re-appropriated by gay activists in the spirit of remembrance and to turn a symbol of repression upside down, and create a statement of political action.

Fire Island Pines: the Stars & Stripes fly next to the Rainbow Flag.

Mr. Baker designed a flag with eight stripes. The order and mean of the stripes, from top to bottom, were hot pink for sex, red for life, orange for healing, yellow for the sun, green for serenity with nature, turquoise for art, indigo for harmony, and violet for spirit. In the true spirit of Betsy Ross, he dyed and sewed the fabric for the first flag himself. Multicolored, striped flags that were used by different left-wing causes and organizations in the Bay area in the 1960s may have influenced his design. Handmade versions of this flag were flown in San Francisco’s 1978 Gay Freedom Day Parade.

“When I die I have visions of fags singing ‘Over the Rainbow’ and the flag at Fire Island being flown at half mast.”
—Judy Garland (1922–1969) 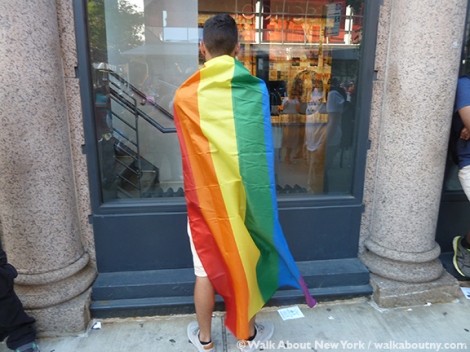 At New York’s Gay Pride Parade along Fifth Avenue: a Rainbow Flag as a cape.

Ms. Garland’s death on June 22, 1969, from an accidental overdose of barbiturates, came one week before the Stonewall Riots in New York. The defiance shown by the gay and transgender patrons of the Stonewall bar in Greenwich Village against the police harassment is acknowledged as the start of the modern gay rights movement, which had its own symbol, the Rainbow Flag a decade later. 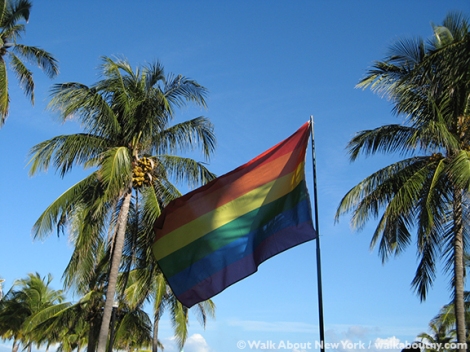 A Rainbow Flag among the palm trees in South Beach, FL.

Beloved by the gay community for her tremendous showmanship and unmatched singing talent, Ms. Garland’s death preceded the popularization of the Rainbow Flag; but tradition tells us that some Fire Island houses were draped in black bunting, mourning her death. What a grand coincidence it is that Over the Rainbow, Ms. Garland’s signature song, and the symbol of gay pride, a rainbow flag, are forever linked! And the connections continue. Mr. Gilbert was born and raised in Kansas, where he never returned; but for Ms. Garland’s Wizard of Oz character, Dorothy Gale, there was no place like home, and home was in Kansas. For more than 60 years gay men have lovingly called themselves, and each other “friends of Dorothy.”

The Great Seal of the State of New York combined with rainbow stripes.

“The flag is an action – it’s more than just the cloth and the stripes. When a person puts the Rainbow Flag on his car or his house, they’re not just flying a flag. They’re taking action.”
—Gilbert Baker 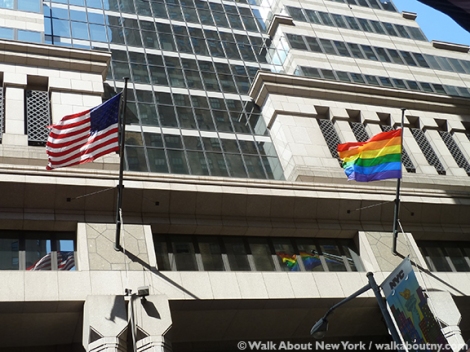 The U.S. flag and the Rainbow Flag, the U.S. headquarters of Deutsche Bank, 60 Wall St.

According the Paramount Flag Co., the company Mr. Gilbert first approached, customers bought almost any striped flag to wave as a sign of gay pride, as opposed to gay liberation, which used the pink triangle on various colored fields. The Rainbow Flag design has been standardized. It now is flown with pride and with six stripes.

“The moment I knew that the flag was beyond my own personal experience – that it wasn’t just something I was making but was something that was happening – was the 1993 March on Washington. From my home in San Francisco I watched the March on C-SPAN and saw hundreds of thousands of people carrying and waving Rainbow Flags on a scale I’d never imagined.”
—Gilbert Baker

“A true flag cannot be designed—it has to be torn from the soul of the people.”
—Anonymous 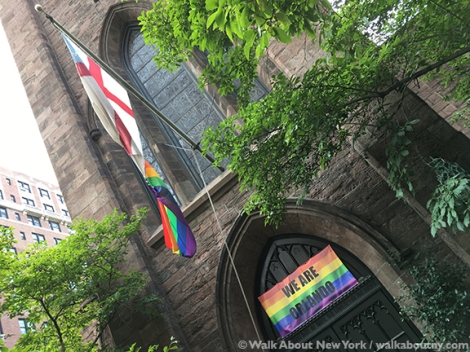 The Church of the Ascension, a National Historic Landmark, shows its pride and support.

The rainbow iconography is used in the Bible’s Old Testament. God promised Noah peace after the flood by sending a rainbow. “God gave a sign of the rainbow to Noah and the rest of humanity that He would not destroy the earth again by means of a Flood. I set My rainbow in the cloud, and it shall be for the sign of the covenant between Me and the earth.” Genesis, Chapter 9, Verse 13