“…commemorate the Christopher Street Uprisings of last summer in which thousands of homosexuals went to the streets to demonstrate against centuries of abuse … from government hostility to employment and housing discrimination, Mafia control of Gay bars, and anti-Homosexual laws”
—from the Christopher Street Liberation Day Committee fliers, which are among the Lili Vincenz and Frank Kameny Papers at the Library of Congress

Although 2019 was the 50th anniversary of the Stonewall Uprising, today is the 50th anniversary of the first Pride march in New York City. That first march was held exactly half a century ago on June 28, 1970, the one-year anniversary of Stonewall. With the aim of giving the community an opportunity to celebrate advances gained in the year since the Stonewall Uprising, the Gay Pride March, called Christopher Street Liberation Day, was the first held in the U.S. Because we are living in the Age of Covid-19 NYC’s annual Gay Pride March will not be held in 2020; but Pride marches on!

In 1976 “Christopher Street,” subtitled ‘That New Magazine’ was founded in New York City. This monthly literary magazine’s goal was to publish fiction, nonfiction, poetry, news, book reviews and photography for the gay community. This first issue is part of the New York Public Library’s Manuscripts and Archive Division, which covers 1979 to 1982 of authors’ scripts and galley proofs “Christopher Street.” The magazine’s last issue was December 1st 1995.

“Gay Power,” published between 1969 and 1975, was the first gay newspaper to appear after the Stonewall Riots. “Gay Power” was the first publication to print artwork by Robert Mapplethorpe (1946–1989). The image that was reproduced was a collage titled “Bull’s Eye;” Mr. Mapplethorpe created it during his final year at Brooklyn’s Pratt Institute of Design, where he studied graphic arts.

After Dark was an entertainment magazine that ran from May 1968 to January 1983. Although the magazine was never an explicitly gay publication, each issue was filled with photos of hot guys, including a shirtless Richard Gere on the cover for September 1978 and a beefy Arnold Schwarzenegger for the February 1977 cover. After Dark ran many advertisements for restaurants, accommodations, clubs, bathhouses, guides, books appealing to gay men. The clothing company’s International Male ads featured skimpy men’s underwear and swimwear. Subtitled “The Magazine of Entertainment,” it was especially attractive to a gay audience because of its coverage of entertainment luminaries such as Chita Rivera, Tommy Tune, Jerry Herman, Carol Channing, Diana Ross, Liza Minnelli, Barbra Streisand, and Angela Lansbury.

Adorably illustrated, this 1960 recruitment flyer, produced by the Mattachine Society of New York, clearly expresses the organization’s efforts to gain rights for the gay community. Using persuasion, appeals for acceptance, and reminders of the tradition of civil liberties in the U.S., stating openly that nothing was wrong with homosexuality was a bold stand to take politically and socially.

Founded in 1950, the Mattachine Society, or the Mattachines as they were known, were named for the masked peasants who performed parodies during the Feast of Fools, held in early January, during the French Renaissance. The performances poked fun at, or protested how they were treated by the nobility.

Advocating for normal treatment of gays at a time when the overwhelming point-of-view was that homosexuals were deviant, pathological, and diseased, the Mattachines got their start clandestinely in Los Angeles. Photos of these gay activists show them as if they had stepped from an “Ozzie and Harriet” episode. However wholesome their public image was, it belies the radical nature of their actions at a time when few gays and lesbians were publicly out of the closet.

This photo, taken by an unknown photographer, shows Renée Vera Pachter Cafiero (1943–present) at the U.S. Army Induction Center on Whitehall Street in Lower Manhattan. Ms. Cafiero was part of the Mattachine Society’s demonstration protesting the U.S. Army’s discrimination against gays, and its practice of disclosing draft records to employers.

With an aim to focus only on gay and lesbian matters, some members of the Gay Liberation Front, which had adopted a broad and radical political agenda, broke off to form the Gay Activists Alliance (GAA) in December 1969. Soon GAA took the Greek letter lambda as its logo. Used to in physics to represent wavelength and the exchange of energy, for gay activists, it symbolized the change they were seeking in society and the law; by the late 1970s by the pink triangle took its place as a symbol of the gay rights movement. Two of GAA’s targets were New York City’s Mayor John V. Lindsay and New York State Governor Nelson A. Rockefeller with demands for change, quickly becoming the major force in gay and lesbian activism in New York City. GAA chapters were established across the country.

As used in this ad, “queer” has a double meaning. Long meaning counterfeit, dating to 1740, as well as homosexual, there has never been a three-dollar U.S. note; used as “counterfeit” the expression dates from the late nineteenth century. 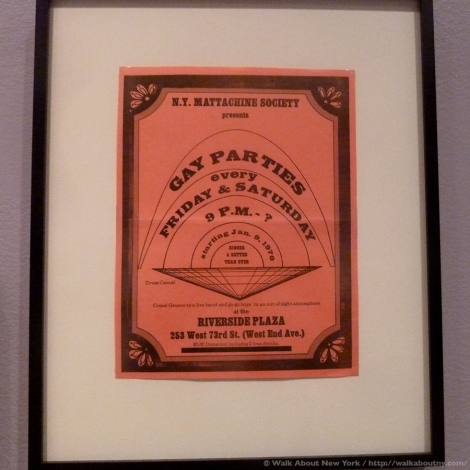 In an effort to create alternatives to meeting in bars or on the streets, the Mattachine Society organized dances for the newly-visible gay and lesbian community. Using the language of the era, this ad invites members to a dance at a less-than-first-class hotel. Now known as the Level Club, an upscale condominium, the Upper West Side’s 253 West 73rd Street started life as a men’s club for Freemasons in 1927. After only three years the bank holding the mortgage foreclosed on the Art Deco-styled building, and it was turned into the 400-room Hotel Riverside Plaza at the corner of Riverside Drive.

As a forerunner to the 21st-century’s marriage-equality effort, Jim Owles (1943–1993), the first president of the Gay Activists Alliance (GAA) was photographed by Richard Wandel at the New York City Marriage Bureau engaging in what were called zaps. This zap included a wedding reception, complete with a cake and coffee. What was a zap? GAA member Marty Robinson is credited with thinking up zaps. The aim of these rowdy public demonstrations was to embarrass an elected public official or celebrity, at the same time getting the attention of the public to gay rights.

Called “America’s Poet” Walt Whitman (1819–1892) is America’s most influential poet. Still selling well in the 21st century, his best-known work, “Leaves of Grass”, brought Mr. Whitman the status of cultural trailblazer. As a gay man in the 19th century, his ability to express the ideas of inclusivity, equality, sensuality, and an individual’s value continue to influence the modern world. This 1855 copy of his life’s work is part of the New York Public Library’s Rare Books Division.

Our Gay Village Walking Tour takes its guests to the Stonewall National Monument and other important sights in LGBT history. Take the Tour; Know More!