“It is appropriate that this statue should be erected in this center of our trade, in the very midst of our craft-work, instead of in Central Park; for Franklin’s life was devoted to practical hard work, rather than to the ornamental and the recreative.”
—Charles C. Savage, president of the New York Typographical Society, speaking at the dedication of the bronze figure of Ben Franklin

Born in Boston and mostly associated with Philadelphia, Benjamin Franklin (1706–1790) is unique amongst the Founding Fathers. He signed four documents central to establishing the United States. Those four documents are the Declaration of Independence, 1776; the Treaty of Alliance with France, 1778; the Treaty of Paris, establishing peace between Great Britain and the U.S., 1783; and the U.S. Constitution, 1787. 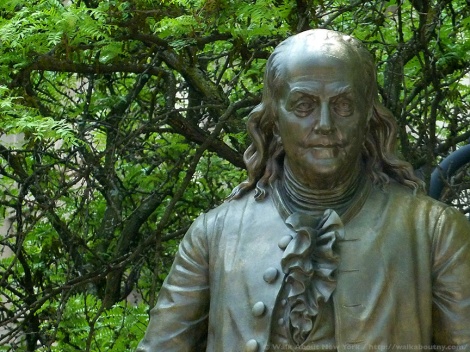 “Search others for their virtues, thy self for thy vices.” —Poor Richard’s Almanack, 1738

Why a tribute to the statesman, scientist, inventor, philosopher, and journalist in the Big Apple? Benjamin Franklin has a slim connection to NYC. One connection is his financial backing for James Parker, his former apprentice when he set-up a printing operation in New York in 1741. Mr. Franklin also was a silent partner when Mr. Parker began publishing the Weekly Post Boy in 1743, later renamed The New-York Gazette. Mr. Franklin had been apprenticed to his brother James’ business where he learned the printing trade. After moving to Philadelphia in 1723, the 17-year-old Ben Franklin launched the Pennsylvania Gazette; it soon became the most popular newspaper in the colonies. 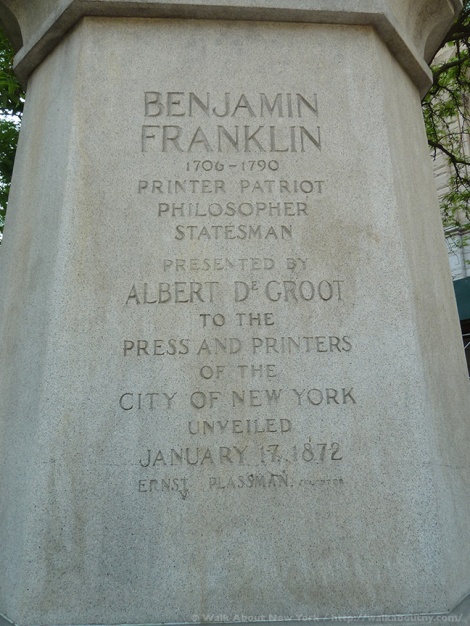 “A true Friend is the best Possession.” —Poor Richard’s Almanack, 1744

A small triangular plot of green next to 41 Park Row, formerly the New York Times headquarters, now belonging to Pace University, is home to this bronze of Mr. Franklin. For decades Park Row was the center of New York City’s publishing industry and newspaper businesses. Because of Mr. Franklin’s fame as a printer of paper currency and a publisher of newspapers and almanacs, is why this location, Printing House Square, is appropriate. This square is located opposite to City Hall; in the colonial era it was a common meeting ground. The Declaration of Independence was read there by George Washington on July 9th 1776.

“You may delay, but time will not.” ―Benjamin Franklin

For months sculptor Ernst Plassman (1823–1877) studied other busts and portraits of Mr. Franklin, as well as period clothes. Commissioned as a gift to New York by Albert DeGroot (1813–1884), a retired Hudson Valley steamboat captain, the bronze of Ben Franklin was not the first time that Captain DeGroot worked with Mr. Plassman. They collaborated in 1869 on a full-length sculpture of Cornelius ‘The Commodore’ Vanderbilt which stands in the viaduct in front of Grand Central Terminal. Captain DeGroot had worked for the Commodore as a ship’s captain. 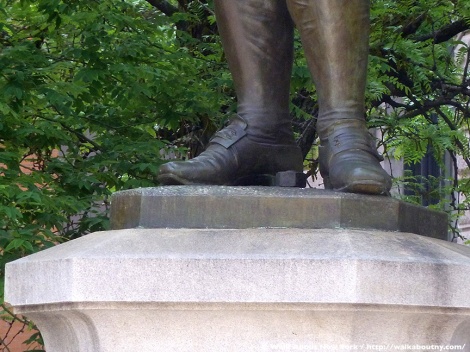 “A Penny Saved is a Penny Earned” ―Benjamin Franklin

This is not the only version of Mr. Plassman’s work in New York City. A second casting stands in the lobby of the High School of Graphic Communication Arts at 439 West 49th Street. Although Mr. Franklin’s formal education ended when he was ten, he continued to learn, to value education, and to offer others the opportunities to learn. In Philadelphia he established in 1731 the first subscription library in the United States, called the Library Company of Philadelphia.  Mr. Franklin opened the Public [spelled ‘Publik’ at the time] Academy of Philadelphia in 1749; this evolved into the University of Pennsylvania. And in 1743 he established the American Philosophical Society, which is recognized as the oldest learned society in the U.S.

“Never ruin an apology with an excuse.” ―Benjamin Franklin

In a lavish ceremony on the 166th anniversary of Franklin’s birth, January 17th 1872, the bronze figure was formally unveiled. Artist, professor, and inventor Samuel F. Morse (1791–1872) was given the honor of removing the covering; and publisher of the New York Tribune, Horace Greeley (1811–1872) delivered the keynote address. Following the dedication on January 12th 1872, a banquet was held for 136 guests at Delmonico’s on 14th Street. Among the guests were the Reverend Henry Beecher, of Brooklyn’s Plymouth Church; industrialist Peter Cooper; Horace Greeley; and the statue’s patron, Captain Albert DeGroot. Cast in 1871 by the George Fischer & Brothers Foundry, at their 209 Forsyth Street workshop in New York City, the 10’6″ figure of Mr. Franklin stands on an 11-foot-6-inch high Millstone granite pedestal. The 16-ton stone for the pedestal was quarried at Millstone Point, near New London, Connecticut. 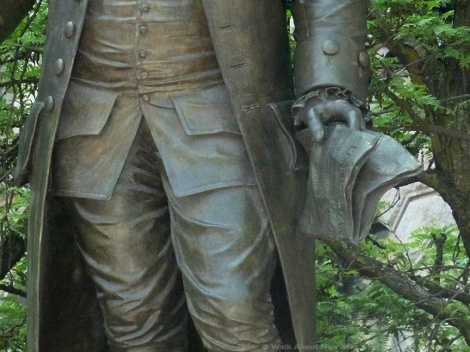 Including an issue of the “Pennsylvania Gazette” in his left hand, Mr. Franklin is shown as a printer. He was a true polymath. He experimented with electricity, the oft-cited use of a kite as a conductor during a lightning storm; he invented an open stove for home heating, called the Franklin stove; bi-focal eyeglasses; and the lightning rod. Because of the high-traffic location, it has suffered environmental damage. Between the 1940s and the 1980s the monument was conserved four different times. The most recent conservation effort of the statue and the pedestal was carried out in 1999. Another reminder of this Founding Father is a playground. Bearing the name of Benjamin Franklin’s alter egos, Poor Richard Saunders, Poor Richard’s Playground is located at East 109 Street between Second and Third Avenues in Manhattan. Franklin Street in Manhattan’s Tribeca neighborhood was named for him in 1811. 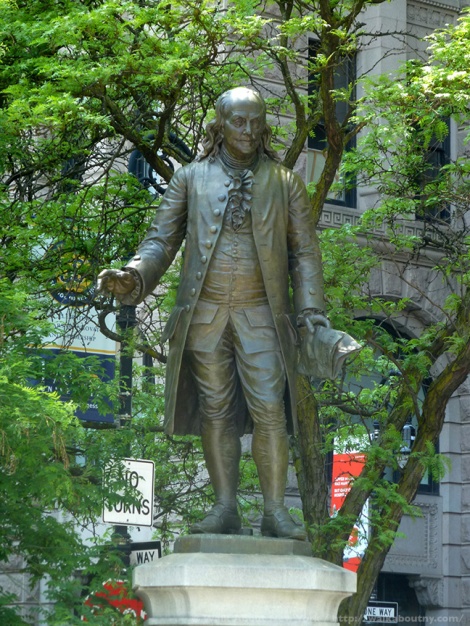